A human settlement tracing back to nearly 25000-year-old in form of rock paintings exist in Buxwaha diamond mining area in Chhatarpur.
Staff Reporter 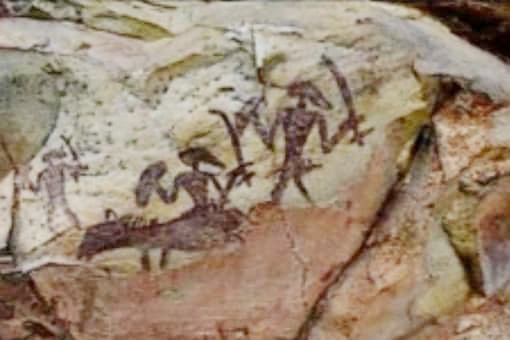 Bhopal: The principal bench of Madhya Pradesh High Court in Jabalpur has issued notices to Archeological Survey of India, Union government and state government in response to a petition related to saving of rock paintings at proposed diamond mining site in Buxwaha in Chhatarpur district.

The petition was filed by social activist PG Najpande urging the court to save rock paintings found in Buxwaha mining sites. Initial survey report by archeology department from Jabalpur, on the instructions of High Court, had suggested that the rock paintings at site were of historical and archeological importance.

Now, the petitioner has asked High Court to bring it to notice of ASI and Union government as well and seek their opinion on the report submitted by Jabalpur archeology team. After this, HC has issued notices to ASI, Union and state governments to reply within 15 days on the matter.

Local activists had found rock paintings of prehistoric era in forests of Buxwaha, where diamond mining project is proposed. After demand from locals, social activist PG Najpande had filed a public interest litigation urging the HC to save the site of national importance that could be destroyed in the mining project.

Najpandey said that ASI has certified that the area has the treasure of early human civilisation. This would help the historians discover evolution of human being and its roots in India.

A human settlement tracing back to nearly 25000-year-old in form of rock paintings in Buxwaha diamond mining area in Chhatarpur, have gained recognition from Archaeological Survey of India.

Besides the paintings, the archaeologists have also come across several idols of Ganesha and Hanuman at the site. Madhya Pradesh: Releasing ex-gratia assistance to workers but government turned it into event,...