District administration of bordering districts of Maharashtra, Gujarat are asking people to show certificates of second dose of Covid vaccine for entering into the state.
Staff Reporter 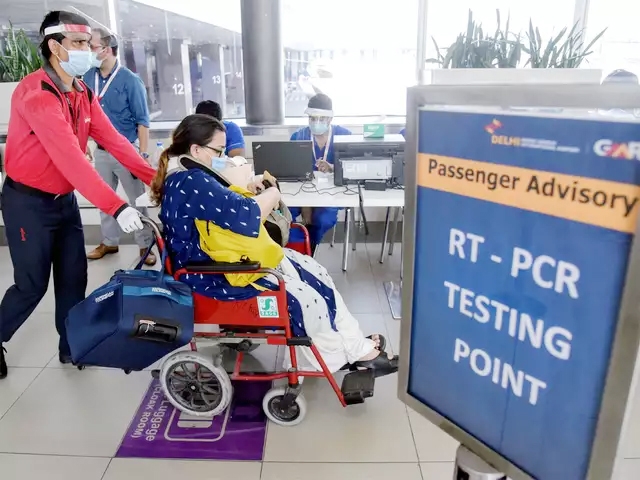 Bhopal: State government has pressed doctors’ teams for RT-PCR test at airports and railway platforms after Airport Authority and Railways wrote it for it after Omicrons cases started noticing in India, according to officials.

At the same time, Railways has made an appeal to people to avoid journey in case of any symptom like cold, cough and fever.

It is second filter or testing as the airports where there services of international flights, foreign travellers are screened and it is second level of tracing system at our side.”

Similarly, divisional railway manager (DRM) Saurabh Bandopadhyay said, “Railways had written state government to take initiatives for RT-PCR in the wake of increasing cases of omicrons variants. However, so far, no case has been detected in Madhya Pradesh but state government has pressed doctors’ teams at platforms for RTPCR testing. In Bhopal, doctors’ teams are available at Rani Kamlapati platform and Bhopal railway station.”

Besides, bordering districts like Alirajpur and Jhabua are asking people for certificate of second dose of Covid vaccination at Railway station and check points on road coming from Maharashtra and Gujarat, according to government officials. Besides, RT-PCR testing is also being conducted, officials added. Gujarat reported Omicron positive patient taking tally to three in country.

Alirajpur collector Manoj Pushp said, “People coming from Maharashtra and Gujarat, are asked to show certificate of second dose of Covid vaccination. If he/she fails to furnish certificate, we have made arrangement of vaccination at check points on roads. Similar is arrangement at Railway platform. So we have enhanced the surveillance of people coming from other states.”

Jhabua collector Somesh Mishra said, “We have also started asking certificates of both the doses of Covid vaccine from those who are coming from Gujarat. And, RTPCR testing enhanced at check points in districts.”

Divisional Commissioner, Jabalpur, Chandrashekhar Rao has tested positive for Coronavirus on Saturday. A team of doctors visited to take stock of his health. CMHO (Jabalpur) Dr Ratnesh Kuraria confirmed it stating divisional commissioner Rao has not been hospitalized so far as a team of doctors visited there to access his health condition. After their report, a decision will be taken. Madhya Pradesh: Farmers should go back to their homes, nothing is left now, says Union Minister...