Madhya Pradesh: Congress distributed certificates to farmers, but did not waive off loans, says Tomar

"As this sin of the Congress was not acceptable to God, the Kamal Nath government fell," he added.
PTI 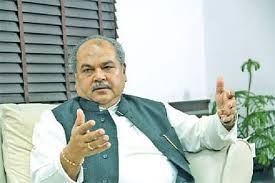 This, he said, was a sin unacceptable to God and that is why the Nath government, which came to power in late 2018, fell in just 15 months in March, 2020.

"In 2018, the BJP got four to five seats less and the Congress formed a government in MP. Soon, after taking oath as chief minister, Nath signed the farm loan waiver file and distributed loan waiver certificates to farmers, but, till date, these loans have not been waived off," Tomar said while addressing a bypoll rally in Raigaon in Satna.

"As this sin of the Congress was not acceptable to God, the Kamal Nath government fell," he added.

The Raigaon (SC) bypoll is scheduled for October 30 and results are to be announced on November 2, with the main fight being between BJP's Pratima Bagri and Congress's Kalpana Verma. It has been necessitated due to the death of sitting BJP MLA Jugal Kishore Bagri.

Tomar said MP was in total darkness during Congress rule till 2003, with no roads or water supply etc, while rapid progress took place under the BJP between 2003 and 2018, with welfare schemes like Ladli Laxmi Yojna, Mukhyamantri Kanyadan Yojna and Sambal Yojna being launched.

"Irrigation facilities under the Congress was just seven lakh hectares, which was enhanced by the BJP to 47 lakh hectares now. Though the COVID-19 pandemic hit revenue of the Centre and states, Prime Minister Narendra Modi or MP CM Shivraj Singh Chouhan have never said there are no funds for welfare schemes for the poor and farmers," he said.

The Modi government distributes Kisan Samman Nidhi of Rs 6,000 annually to farmers, and in MP, the Chouhan government has added Rs 4,000 to the amount, making it a cumulative sum of Rs 10,000, Tomar said.

Besides, Raigaon, bypolls are also due in Prithvipur and Jobat Assembly seats and Khandwa Lok Sabha constituency.