Bhopal (Madhya Pradesh): Director, MP School of Drama (MPSD), Alok Chatterjee handed over his charge to PK Jha, deputy director, Culture, on Friday. Chatterjee’s three-year tenure as director had ended on Thursday. Jha will be in-charge director till a full-time head of the institution is appointed.

Chatterjee was the second head of the MPSD. He had taken over as the director on October 8, 2018 from Sanjay Upadhyay, who headed the institution since its inception in 2010 up to 2018. 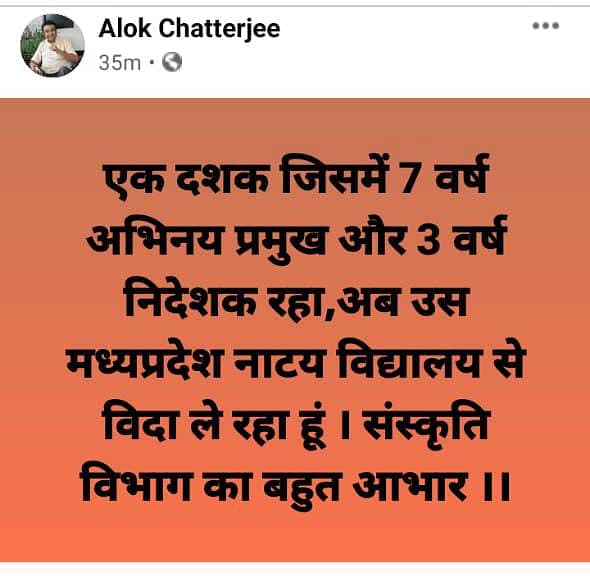 Chatterjee, who was hopeful of extension in his term till the last moment, wrote on his Facebook Wall that he is bidding adieu to MPSD after a decade - seven years as faculty member and three as director. He expressed his gratitude to the Culture Department.

Chatterjee, who has taught at the National School of Drama (NSD), Delhi and Pune based Film and Television Institute of India (FTII) is a gold medalist from the NSD.

The Covid-19 pandemic affected the teaching at the school during a major part of Chatterjee’s tenure. The institution resumed normal functioning in mid-September this year after the second Covid wave. With no decision yet on the successor of Chatterjee, there is a possibility that the MPSD may remain headless for some time.

MPSD is a theatre training institute and an autonomous organisation under the Department of Culture. It was formally inaugurated in 2011. Sanjay Upadhyay was appointed its first director in 2010. After the expiry of his term in 2015, he was given an extension of three years.

According to sources, among others, Jayant Deshmukh, Teekam Joshi, Sanjay Mehta, Rajeev Verma and Priyanka Shakti Thakur are in the race for the directorship of the school.