They blamed the hospital authorities for the death of the woman and damaged the properties of the health centre.

Gwalior (Madhya Pradesh): The relatives of a woman patient created a ruckus on the premises of Janak Hospital after her death on Friday night, the police said on Saturday.

They blamed the hospital authorities for the death of the woman and damaged the properties of the health centre.

On getting information, the police rushed to the spot and tried to pacify the woman’s relatives who demanded an FIR against the doctor. The police, however, brought the situation under control.

The wife of a resident of Gubbara Fatak Pradeep Pal, Ranu Pal, who was suffering from gallbladder stone, was admitted to Janak Hospital.

The family members alleged that the hospital had taken Rs 200,000 for operation, but the patient died because of the doctors’ negligence.

The family members of the woman were so angry that they broke the glass door of the ICU.

The situation had come to such a pass that a large number of people gathered at the hospital and policemen had to be called from three police stations.

Many doctors across the city came to the hospital and supported the management.

The relatives of the woman did not want to take her body from the hospital saying that Rs 200,000 should be returned and an FIR registered against the doctor.

The policemen called an ambulance and sent the body for cremation.

A truck passing through the Gwalior-Shivpuri highway caught fire near Ghatigaon police station on Friday night but the driver saved his life by jumping out of the vehicle, the police said on Saturday.

The truck was loaded with the material used to make incense sticks. A fire engine rushed to the spot and doused the flames, but the material worth lakhs of rupees turned into ashes.

Fire officer Komal Singh Barelia said that when the truck, loaded with the material for incense sticks was passing through the Gwalior-Shivpuri highway, it caught fire.

The fire brigade officials doused the flames but the reasons for the incident could not be learnt, Barelia said. 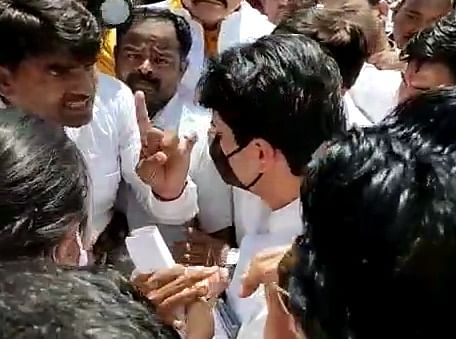