The victim had borrowed a sum of Rs.8,500 from one of his close friends Mantosh Jha.

Gwalior (Madhya Pradesh): The police have registered a case against a man for killing his friend by opening fire on him over monetary dispute, said the police on Monday. The accused is on the run.

As per the statements of Gola ka Mandir police station incharge Mirza Asif Beg, the deceased has been identified as Vikas Yadav (38). The complainant, identified as Yadav’s wife told the police that Yadav was posted as a clerk in Gwalior Municipal Corporation. Yadav had borrowed a sum of Rs. 8,500 from one of his close friends Mantosh Jha. When Yadav was unable to return money, his friendship with Jha turned sour.

The complainant then stated that Jha arrived in their colony on Sunday night and called up Yadav, asking him to come out of the house. Yadav went out of the house to meet Jha. Soon, they had an altercation over the borrowed sum. Enraged, Jha opened fire on Yadav and fled.

Yadav’s wife rushed him to the hospital, where he was declared brought dead on arrival. The police were informed to began investigation. “A manhunt has been launched to nab the accused, who is absconding after the incident”, said SHO Beg. 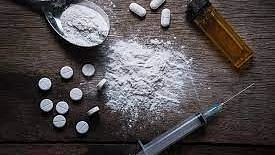