‘Yoga teachers to be recruited for training in schools across state’

Bhopal (Madhya Pradesh): A Yoga Commission was constituted in the state on Tuesday hours after Chief Minister Shivraj Singh Chouhan made an announcement to the effect on the 8th International Yoga Day, as per a notification from the state government.

Earlier, stating his own example as to how Yoga helps him keep fit and work 18 hours a day, Chouhan announced the constitution of a Yoga commission in the state and training of yoga in schools across state during a programme held at the CM House.

On the occasion Prime Minister Narendra Modi’s address on the theme of ‘Yoga for Humanity’ from Mysore Palace, Karnataka was also telecast.

Addressing the gathering at the CM House, Chouhan said, “Yoga training would be imparted in the schools of the state to make yoga an integral part of life for which Yoga teachers will also be recruited. Necessary arrangements will also be made so that people can practise simple yoga regularly at home.”

He said cooperation of yoga seekers will be taken from organisations like International Yoga Institute, Patanjali Yoga Sansthan, Isha Yoga Foundation and Art of Living.

He said, “Yoga derived from the tradition of Indian culture and spirituality, is today becoming the basis of global cooperation. This will prove to be a means of keeping the human body healthy.” International Yoga Day is a symbol of human vitality after the whole world has faced such a huge Corona pandemic.

In his address Prime Minister Narendra Modi said, “Yoga is a source of peace for all of us. It is the medium of individual peace, peace for society, peace for nations and peace for the universe. Yoga paves the way for a solution to all problems.”

Prime Minister said, “Country is celebrating the Azadi ka Amrit Mahotsav. Today, in the 75th year of independence, Yoga programmes which are to be organised simultaneously at 75 historical places of the country will create cultural energy and consciousness. People from different countries of the world are joining yoga with the sunrise and the movement of the Sun.”

He said a large number of people were practising yoga with the first rays of the sun in different countries. In this way a ring of yoga was being formed around the whole earth.

“This is the ‘Cardinal Ring of Yoga’. These efforts are giving wonderful inspiration to the whole world to balance health. Yoga is now becoming the ‘Way of Life’”, he said.

Governor Mangubhai Patel participated in a Yoga programme held at Raj Bhavan. He watched the live telecast of the speech of Prime Minister Narendra Modi the latter made at Mysore Palace and the speech of Chief Minister Shivraj Singh Chouhan, as per an official statement.

Along with the governor, about 200 people who included principal secretary to governor DP Ahuja, other Raj Bhavan officials and employees, students etc collectively performed various asanas. 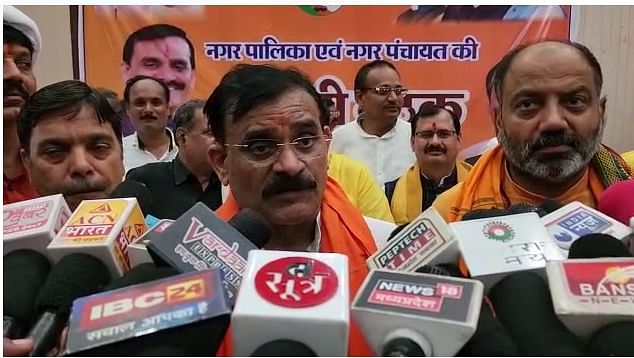