The MP visited BJP office in Bhopal to apprise Sharma of the order passed by Alirajpur Court.
Staff Reporter 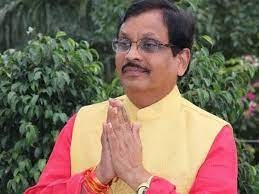 BHOPAL: Member of Parliament from Jhabua, GS Damor, called on state BJP president VD Sharma at BJP office here in Bhopal to apprise him of the order passed by Alirajpur Court. The court has ordered an FIR against him and others in an alleged Rs 600 crore procurement scam. Sharma, however, gave only two minutes to Damor.

A petition was filed in Alirajpur Court against Damor, in connection with Fluorosis Control programme when he was serving then as engineer in Indore. When Damore came out from the state president’s office, the media surrounded him seeking a reply on his alleged involvement in the scam.

A video went viral on social media in which the guards and other people accompanying him were seen pushing media persons to make way for the Member of Parliament.