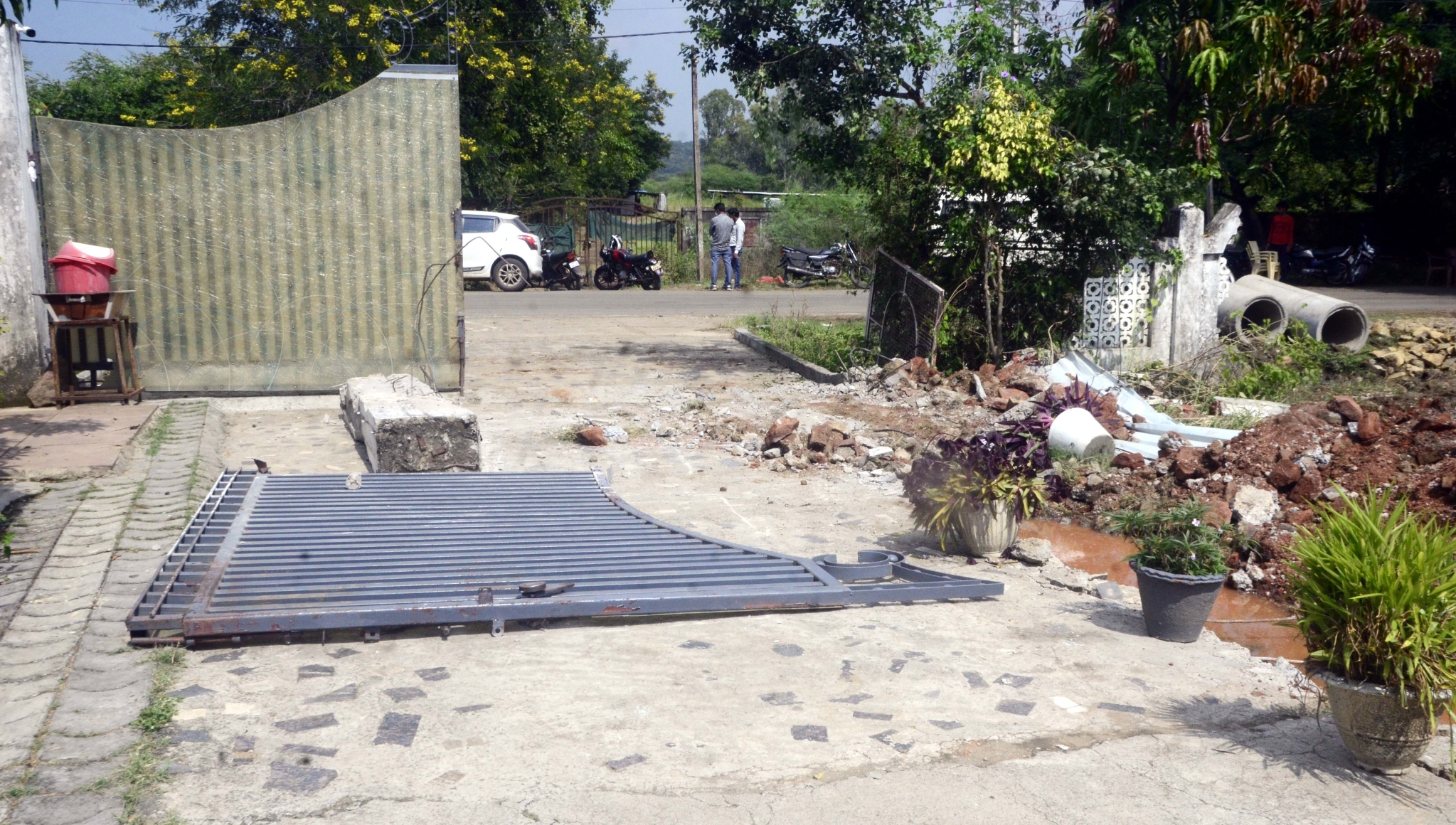 Damaged portion of a building |

Bhopal: Retired IAS officer Sabhajit Yadav's wife Shobhna Yadav lodged a complaint with Ratibad police station on Thursday alleging a JCB machine driver made an attempt to kill (her daughter-in-law) at the behest of Retd IAS officer BR Naidu and family members on Wednesday when they tried to stop the driver from damaging the road near her kitchen.

Shobhna demanded lodging of an FIR in this connection and sought police protection to her and family. According to police, there is a complaint already lodged by the Naidus alleging Shobhna damaged their boundary wall. Notably, a team of workers with a JCB machine damaged construction on a piece of land at Bishankhedi reportedly after Naidu's complaint to the authorities that the construction was illegal and it was done on his land.

Shobhna Yadav in the complaint to the police, a copy of which is available with Free Press, alleged director general of Jan Abhiyan Parishad BR Naidu, Commandant 25th battalion (SAF) Nivedita Naidu, Satyanarayan Naidu and BS Rai came with a JCB (registration number of which had been erased and whose driver's name is Ravi) at 9 am on Wednesday."First my gate and pillar were damaged after which flower pots and then the pathway with Kota stones fixed on the same, was damaged by 5 feet to 8 feet", stated the complaint. "Eight to 10 police personnel, revenue department officials, some employees and officials from Jan Abhiyan Parishad and some jawans of SAF were present with Nivedita. When asked (a) police officer said they were there at the instructions of their officials for security. They had nothing to do with any damage. They returned after causing the damage by 3 pm", states the complaint. "(They) returned between 3.30 pm and 4 pm. Jamuna Naidu was with them. They started damaging the road near her kitchen. My daughter Anushri and daughter-in-law Megha tried to stop them. Satyanarayan Naidu, who is brother of BR Gopal Naidu, man named BS Rai misbehaved with my daughter-in-law. Ravi, driver made an attempt to kill (my daughter-in-law) by running the JCB machine (over her) at the behest of Jamuna Naidu, Nivedita Naidu and BR Naidu, photo of which is attached," states the complaint.

Shobhna Yadav has demanded lodging of an FIR in this connection and also police protection for them. Despite efforts BR Naidu couldn't be reached for his comments. He didn't take phone calls and didn't respond to a message in this regard. However, when contacted Naidu's daughter Nivedita Naidu who is an IPS officer said, "Matter is with police. Pls contact the police to have details." When contacted Ratibad police station in charge Sudesh Tiwari said, "We have received complaints from both sides. We are looking into the complaints."