The fire has caused lot of damage in the Bandhavgarh forest and the state government would request the Centre to acquire modern firefighting aircraft to tackle such incidents, Vijay Shah said.

Fire in Bandhavgarh Tiger Reserve | File Photo
Follow us on

Bhopal (Madhya Pradesh): Burning of leaves to collect Mahua flowers, lighting a fire to keep wild elephants away or a burning cigarette butt left by someone may have caused the recent blaze in Madhya Pradesh's Bandhavgarh Tiger Reserve, state Forest Minister Vijay Shah said on Sunday.

The fire has caused lot of damage in Bandhavgarh forest and the state government would request the Centre to acquire modern firefighting aircraft to tackle such incidents, Shah told PTI.

The wildfire was reported a few days back in parts of the Bandhavgarh Tiger Reserve (BTR) located in Umaria district and was doused on Wednesday, forest officials earlier said.

The blaze reduced to ashes parts of one of the largest biosphere reserves in India, they said. A day after visiting the BTR, Shah said fortunately, no death of human or wild animal was reported and everyone worked hard to put out the blaze.

He said there may be three causes that led to the fire in the tiger reserve. Firstly, people burn and clean up an area of leaves beneath Mahua trees to easily collect flowers fallen from the trees, he said.

Secondly, it is possible that people living in the reserve and its buffer area might have lit a fire to keep away wild elephants that have entered the reserve from neighbouring Chhattisgarh, he said.

Lastly, someone might have left a burning cigarette butt or a 'bidi' that led to the blaze, Shah said, adding that fire usually breaks out in forests during summers. "The fire has caused quite a lot of damage to the Bandhavgarh forest and modern equipment are desperately needed to douse such a blaze. A meeting in this regard will take place on April 6 or 7," Shah said.

He noted that firefighter aircraft are used to douse big fires in the developed countries. "Our country has such big forests. We are going to request the central government to buy such an aircraft that costs about Rs 235 crore," Shah said.

He said such an aircraft has the capacity to store huge amount of water. "In such incidents of fire, the aircraft can fly to Bandhavgarh and Kanha (another tiger reserve in MP) in two hours (from Delhi)," the minister said.

The Bandhavgarh Tiger Reserve (BTR) is spread over an area of 1,536.93 sq km. There were 104 adult tigers in the BTR, as per the animal count. It is one of the densely populated habitats of the striped animal in the country, BTR's field director Vincent Raheem said.

According to a forest official, the fire had broken out in some reserve buffer zones and engulfed parts of the BTR's core area in 15 to 20 places. A panel comprising the BTR's deputy director and assistant director are conducting a probe into the cause of the blaze and assessing the damage caused by it, Raheem said. 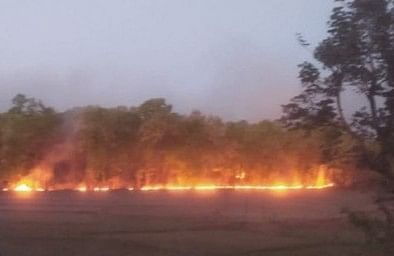