The recent brutality in Sipajhar village, Assam, is further proof of our having morphed into a monstrous nation, writes Sanjay Jha

On social media, a 1.5-minute long video that showed a photographer jumping menacingly on a man lying unconscious went viral. It was macabre, a manifestation of choleric infuriation. Police stood by watching the grotesque spectacle. The dead man was reportedly one Moinul Haque, allegedly one of the people protesting their forced eviction from their land by the Assam government 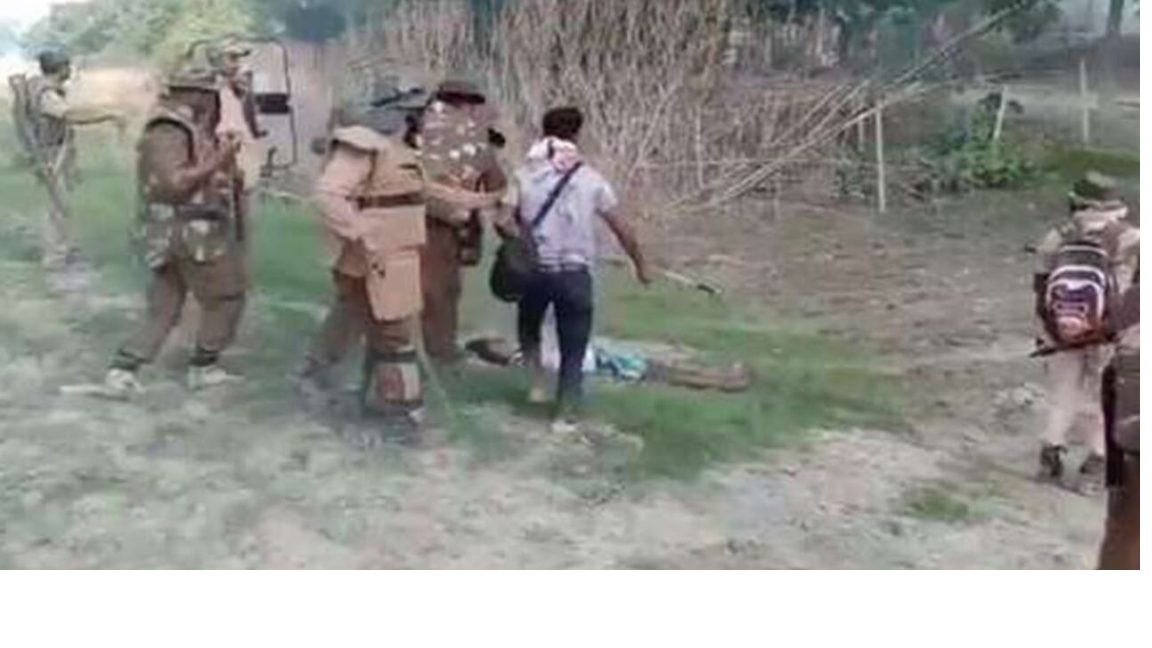 India has become an angry nation, frothing with hate, brimming with uncontrollable rage. On social media, a one-and-a half-minute long video that showed a photographer jumping menacingly on a man lying unconscious went viral. It looked savage, weird and repugnant. It appeared to have a clear intent to ensure that the wounded man became permanently motionless. It was macabre, a manifestation of choleric infuriation.

Policemen stood by watching the grotesque spectacle. Several of them even thrashed the inanimate body with their powerful batons. Thankfully someone posted the horrific video, otherwise we would have never known about the brutality in the fields of Sipajhar village in Assam’s Darrang on September 23, 2021.

While responsible sections of the mainstream media and online portals did recommend viewer discretion when watching the reel, the hard truth is that perhaps it will help us Indians to see the mirror. We need to see our own disintegration, revolting at the core. It takes courage to see one’s own degenerative collapse. It may not be a bad idea to embrace reality and face truths; why are we so self-delusional? India needs to stop hallucinating; we have metastasized into a Frankenstein’s monster where taking the life of a fellow citizen (in riots, lynching, murders, etc.) seems proforma. The pornography of hate is now the new normal. A society that was seemingly tolerant once despite sporadic violence and manifestations of polarisation, has made its viciousness bare-faced. The pretense is disappearing. The veil is off.

On Twitter, expectedly the trends of the Assam ugliness had a communal colour. The dead man was reportedly one Moinul Haque, allegedly one of the people protesting their forced eviction from their land by the Assam government (the court case is still pending final judgment).

His parents were distraught. He was the father of three children, aged seven, five and two. Just pause and imagine the nightmares they will go through for the rest of their lives. The inevitable scars that will permanently remain. The traumatic ordeal of death that came knocking at their doorstep. A future ravaged by uncertainty, plagued by fear. The emotional laceration that can haunt one forever.

After a fleeting breaking news and some plastic soul-searching, and politicians’ platitudes on Twitter, Haque became another statistic among those who had an unnatural death. Don’t be surprised if there are cases registered against him; after all, in the video he is seen chasing the photographer with a lathi, apparently prompting the cops to shoot him in the chest (pictures show a red blot on his upper abdomen). The police say he was killed in self-defence. In India, the victim often miraculously becomes the accused. Our new national fetish is the glorification of violence. It is institutionalised. It reveals a deeper resentment.

Muslims seem to be the predominant object of this anger, albeit the Dalits are also frequently attacked. As a society we seem to be reconciled to this palpable social segregation. It is also apparent that middle-class sensibilities do not seem to be at all appalled by the madness around. Our political culture is vitiated, mired in a monstrous labyrinth of caste hierarchies and religious persecution. We only comprehend the algorithm of our ancestral origins; our birth determines the probability of the violence we are most likely to experience in our lives.

Frightened about the future

I have friends who are Muslims who are frightened of what lies ahead for them in a country where their forefathers have lived for centuries. They have served in the Army, they have fought at the borders against all odds. But they are repeatedly asked to corroborate their patriotic credentials. In the New Age of Identity Politics, they stand little chance when the ruling dispensation encourages the nativist who thrives in his new-found majoritarian muscle power.

Tribalism is in vogue and accelerating in both swank urban homes and thatched huts in the rural interiors of India. Hate is pervasive and often increases exponentially when people find politicians indifferent to human suffering. The mainstream media brazenly obfuscates issues through whataboutery. The latter creates a false equivalence, almost giving the perpetrators a licence to violence in the name of historical score-settling. The culprits get away, on account of both a compromised criminal justice system and state-sponsored benevolence. Death is soon forgotten. India moves on. Violence gradually becomes kosher to vent frustrations and often to seek revenge for the real and imagined sins of the past.

At Jantar Mantar in Delhi, there was a vituperative call for teaching Muslims a lesson. The rally was ironically called ‘Bharat Jodo’. In the India I once knew, it would have led to a public outcry with people of all hues demanding strict punishment against the nihilists. But nowadays, civil society seems to have gone into radio silence.

India’s leading opposition party, the Congress, that was once a torchbearer of secular diversity, seems in perennial trepidation in taking a clear stand. It nervously calculates the potential loss of Hindu votes for appearing to adhere to its enshrined principles. The BJP, of course, appears delirious with the dollops of hate-mongering. A divided society suits its polarising politics. But they could be plunging India into an inextricable vortex of loathsome hate. The consequences of combustible rage could be injurious to the country’s social tapestry. We could soon be on the brink.

India under the BJP has become an angry nation; from WhatsApp groups of school batchmates, television debates, social media trolling, inflammatory hate-speeches, to the dog-whistle politics of those who say Kabristan-Shamshan and Abba Jaan. We are seething within.

The country of a non-violent Gandhi is indeed befriending venom evidenced in the paroxysms of hate. I don’t see any antidotes round the corner.