The many ways to rig numbers

Process of citizenship is bound to become suspect when documents can be acquired by imposters.

On February 6, Sanjay Dhotre, minister of state for Electronics and IT, informed the Rajya Sabha (reply to Unstarred question No.527 which enquired about Aadhaar cards), that “Seven states have Aadhaar more than the projected population as on December 31, 2019," He further stated that the “Estimated number of deaths of Aadhaar holders has been accounted in Aadhaar saturation. These could be attributed to error in projection of population, migration of population etc.” and that “There is no plan to flag deceased Aadhaar holders [even if documents relating to the deceased person were submitted to the Aadhaar authorities].”

While this bit of information caused the jaws of many people to drop, those who have been campaigning against Aadhaar for years merely smile and shake their heads sadly as if to say “We-told-you -so”.

At the heart of the entire protest of Aadhaar are three issues:

The admission before the Rajya Sabha is an implicit confirmation of the first two fears. That more Aadhaar cards have been issued compared to the population. Moreover, since more Aadhar cards – greater than even the population – have been issued, quite obviously the card holders would have assumed bogus or non-existent personalities.

This also leads to the next question. If the government cannot even get the issuance of Aadhaar done in a scientific and foolproof manner – despite years of planning, and mobilising huge resources at its command – how will it ever implement a citizenship register? If the basic certification of religions is not possible (except maybe for Christians, Parsis and Jews, where some sort of register of community members already exists), and if Aadhaar cards themselves are not reliable, can the recently enacted Citizenship Amendment Act (CAA) be implemented? Would it not be more sensible to first do an audit of all Aadhaar cards? What is equally disturbing is that (as testified before the Rajya Sabha) Aadhaar will also be one of the documents used to identify a citizen.

It also leads to a bigger and more crucial question – was the Supreme Court not right when it ordered that Aadhaar cards should not be used to open bank accounts – though payment of entitlements through Aadhaar into bank accounts has been permitted? And isn’t it dangerous to link Aadhaar to PAN cards, especially since Aadhaar can be used to get new PAN cards issued? Thus, you will have bogus Aadhaar and bogus PAN cards as well. That will muddy waters further. 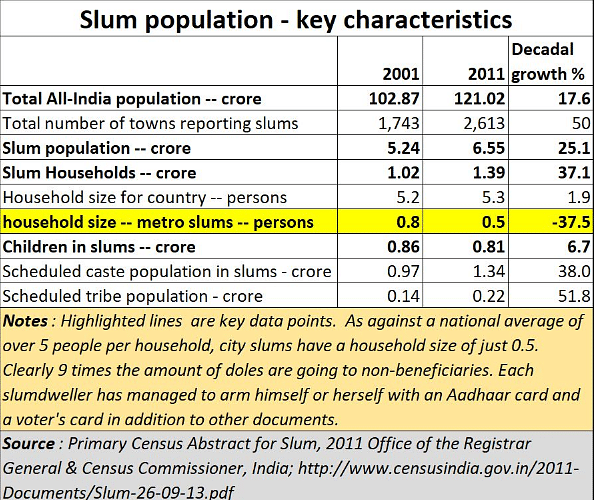 When you have bogus Aadhaar cards and an NPCI which does not keep details of previous transactions of any Aadhaar card holder, India will be creating a mechanism for siphoning out thousands of crores of rupees from the national exchequer. There will be no audit trail. India will be creating a situation where any citizenship process will itself become suspect because the government has allowed the basic documents to be acquired by imposters. The government’s plans of allowing the Aadhaar rather than the passport to become the main document for identification is thus equally disturbing .

The Rajya Sabha statement thus provides a glimpse into the ways in which large scale fraud can be committed and perpetuated. It also shows how the concept of nationhood is in jeopardy because the very documents being used to prove citizenship are themselves no longer reliable.

A recent chart that this author carried highlights how absurd the situation has become. In city slums, you find ten times the number of households than justifiable. As against the national norm of around 5 people per household, slums have a household size of 0.5 which is a padding of nine times. This is because almost most slumdwellers have lent their names to at least two families. This is because all benefits to slums – free housing, electricity, gas and water supply and rations – are based on households.

So, the state has created leaky rules. Now with citizenship, just the same way as with Aadhaar.

It is a frightening state of affairs.

HomeAnalysisThe many ways to rig numbers