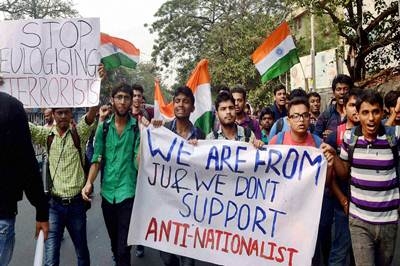 Kolkata: ABVP students of Jadavpur University take out a rally over JNU issue at the University campus in Kolkata on Wednesday. PTI Photo (PTI2_17_2016_000217B) |

The similarity between what took place in Hyderabad central university last month and is happening now in New Delhi’s Jawaharlal Nehru University (JNU) is obvious.

The common link is the outrage expressed by the Akhil Bharatiya Vidyarthi Parishad (ABVP), the BJP’s student wing, over the functions organized by the Ambedkar Student Association (ASA) in Hyderabad and the Leftist unions in JNU in remembrance of two terrorists – Yakub Memon and Afzal Guru.

Another common feature is the promptness with which some of the central ministers responded to the ABVP’s professed concern for Mother India to brand the two universities as the dens of anti-nationals. In the JNU, the display of patriotism by the ministers was made easier by the rather foolish anti-India slogans raised by some of the Leftist students.

Although these have been condemned by the student leaders, it would have been too much to expect the BJP to let go of the opportunity to label its opponents as enemies of the nation. The stigma has been much in use in recent months by the saffron lobby against award returnees, beef-eaters, a section of film makers and others.

In Hyderabad, the BJP and the ABVP had to back off after the suicide of Rohith Vemula, a bright student, but not before a BJP general secretary, P. Muralidhar Rao, had spoken of the dead student’s support for terrorists.

In JNU, the Hindutva camp evidently wants to make the most of the present chance to tarnish the university’s name. As it is, its reputation as a Leftist bastion has long been a sore point with the saffron brigade.

Although being a Leftist is only a step away in their eyes from being an anti-national, pro-Muslim beef-eater, the ABVP has not been noticeably successful in making its presence felt among the university’s students. Now, with the support of the police and the Union home ministry, it apparently hopes to make hay while the sun shines.

However, the BJP has lately been treading on thin ice because of its obsession with the term anti-national and the penchant for using the law on sedition against critics. It is understandable that the party’s self-image as the standard-bearer of patriotism makes it look down on all others who do not subscribe to its worldview.

But xenophobia is as much of an oddity in a democracy as Left extremism. Even if ultra-nationalism does not lead to political turbulence while hounding a painter like M.F. Husain out of the county for depicting Hindu deities in ways of which the saffronities do not approve, its advocacy can be counter-productive in an open society which values free speech.This is all the more so when students are involved, for the rounding up of youngsters and the entry of policemen into campuses do not reflect well on the establishment, whatever the provocation. Even if dubious slogans were raised, it would have been better to leave the matter to the university authorities to deal with it instead of the Union ministers wearing badges of patriotism on their sleeves intervening directly as they did in both Hyderabad and JNU.

Evidently, the ministers are keen to score political points on the BJP’s behalf at a time when the party has lost much of its sheen, as recent election results show. This intention is displayed all the more starkly when the charges of sedition are clamped on the accused.

Considering that the same allegation was used against Hardik Patel in Gujarat for leading an agitation of the Patel community against the BJP government in the State, it is obvious that the Modi dispensation finds this law recalling the colonial days handy when dealing with either a new entrant into politics or callow youngsters in universities.

There is justification for targeting Maoists for “waging war” against India because of their ideology of a violent overthrow of the existing social system. Moreover, they are an organised armed force that has managed to establish itself in certain parts of the country.

It is also the same with the north-eastern rebels and the Kashmiri separatists. In the 1980s, the Khalistani insurgents fell into this category. These are the secessionists who pose a danger to the country. The excitable adolescents of JNU are not in the same league. What they need is psychological counselling from teachers whom they respect and not a spell in jail which can deepen their flawed beliefs.

The BJP’s preference for such harsh legal measures can also erase the present slender difference between the party’s and the Sangh parivar’s fringe elements and the mainstream politicians. There is little doubt that the party has been trying to control those who favour ghar wapsi for Muslims and advise beef-eaters to go to Pakistan.

But these efforts will be in vain if the impression of the party’s innate intolerance comes to the fore again as when it led to writers, historians, scientists, filmmakers and others to return their awards. Historically, the labelling of opponents as anti-nationals has been associated with fascists. Since the BJP has been known to have fascistic inclinations, its latest tactics, including trying to establish a link between the Lashkar-e-Taiba and the JNU students, will confirm this propensity.

Also Read by The Author: