Progression To State Of Intolerance

The brutal attack on veteran CPI leader and social activist Govind Pansare has shocked Maharashtra, as it is considered as an attempt to create trouble in the state, which has been violence-free for the last few years. The state administration has failed so far in unearthing the root cause behind such brutal attacks on leaders who propagate secular, progressive thoughts and attack retrograde forces which encourage customs and blind faith.

The state, which has had a long tradition of social reforms and has seen a number of social reformers in the past 100 years, as well as a long line of saints who have promoted social and religious harmony, is shocked by the increasing number of attacks on social reformers who have been taking up contemporary issues affecting harmony in society. At the time of writing, Pansare’s condition was critical, but stable.

His wife, who was accompanying him on a morning walk, was also hurt in the attack by unidentified elements. The killers of the rationalist, reformist, anti-superstition activist, Dr Narendra Dabholkar, are still at large, despite efforts to nab them. He was attacked before elections whereas Pansare’s attack has occurred even when there is no such political event on the cards. So now, the state has the dubious distinction of notching up two major attacks on social reformers of note and scores others that go unreported, when it involves local workers attached to NGOs. The brutal attack on Pansare has provoked large-scale protests in the state by various organisations, parties and NGOs that broadly veer to the left of the political spectrum. The activists staged protests in several parts of the state, mostly urban centres including Mumbai, Nasik, Pune, Sholapur and Aurangabad.

After a long time, the state saw black flags, blocked roads and slogans against right wing political organisations. Following the death of Dabholkar, Pansare had taken the lead

to keep the heat on the authorities for the passage of the Anti-Superstition Bill.

Pansare is a well-known personality from the communist movement in the state for the last five decades and is an ardent critic of right wing politics. However, he has never known to be unreasonable or one who would launch personal attacks on his political rivals. He is greatly respected by his friends, as well as political foes, making the attack on him even more mysterious.

His book, ‘Who was Shivaji?’, written in 1984, had created a lot of excitement in political circles as he  had depicted Shivaji as the king of commoners and not as a ‘Hindu’ King. Those who used Shivaji for their political mileage obviously did not like his interpretation, but no one went to the extent of attacking him.

The book has been now translated into many languages and distributed in neighbouring states. Pansare was close to Dabholkar.  His non-traditional ways of thinking and radical ideas have resulted in threats to his life for quite some time now, but neither he nor his friends ever imagined that he would be attacked so brutally.

In the recent past, he had been leading

an anti-toll campaign in Kolhapur. This agitation was one of the most successful agitations and was replicated in other centres. A section of people from Kolhapur are eager to know whether this attack on him had anything to do with this issue.

What has surprised many is the similarity of the attacks on Dr Dabholkar and Pansare. Both were observed closely before the attack was carried out, both were on a morning stroll, when there are not many people around and in both cases, the attackers came on motorbikes and vanished within seconds after carrying out their attack. Protesters against these attacks believe that there is an effort to stifle dissent and discussion. Pansare’s close aides are wondering who opposed him when he wanted to discuss a book titled, ‘Who Killed Hemant Karkare?’

Who killed Dabholkar is a question that still remains unanswered. Who attacked Pansare is the next question and the case poses a big challenge for the state police. Chief Minister Devendra Fadnavis, who also holds charge as home minister, has assured people that no stone will be left unturned in nabbing Pansare’s attackers. The police have set up ten special cells to investigate.

CPM leader Ajit Abhyankar feels that social reformists being increasingly targeted only goes to show the increase in the level of intolerance. He is convinced that these attacks have increased after the BJP came to power in Delhi and Mumbai. He says never before was a CPM office vandalised in the state, an incident which happened recently in Pune.  The Shiv Sena has also criticised these attacks and those involved in plotting such dastardly attacks.

Saamana editor Sanjay Raut said has described the attack as cowardly, and one which has sullied Maharashtra’s progressive image. There is a need to find out whether there is a link between the murder of Dabholkar and the attack on Pansare. Social activist Medha Patkar has also made a similar suggestion to the government. It is almost obvious that both the attacks were pre-planned. There is a possibility that these are contract killings and the killers were not even aware of their quarry.. There is a strong likelihood of the attack being politically motivated.

There is a crying need for creating a conducive atmosphere in the state, which is witnessing extreme views on some sensitive issues. This can be achieved only by cultivating greater tolerance of opposing views, as well as fostering better understanding between senior leaders of different political parties and ideologies. 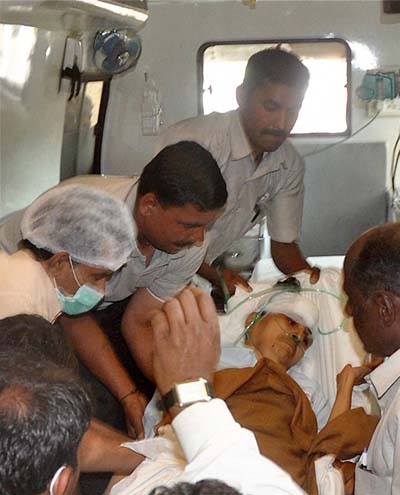