Indian stock markets are euphoric. Punters are predicting that the Sensex will cross 50,000 before Budget time. And they provide all sorts of reasons to justify such excitement. Just look at the chart alongside. The markets have shrugged off the economic downturn of the past two years and more. They have discounted the body blows from the pandemic. And they’ve ignored the weakening of the US dollar and what it could mean for the global economy. They continue to believe that nothing can stop Indian markets from rising.

Yet there are danger signals ahead. At least two market stalwarts, Charlie Munger and Jeremy Grantham have advised caution. Munger is quite sharp in his critique and sees trouble in the stock market in 2021 itself.

Grantham in his Jan 5, 2021 newsletter titled ‘Waiting for the last dance’ talks about “The Hazards of Asset Allocation in a Late-stage Major Bubble”. He is quite blunt: “Featuring extreme overvaluation, explosive price increases, frenzied issuance, and hysterically speculative investor behaviour, I believe this event will be recorded as one of the great bubbles of financial history, right along with the South Sea bubble, 1929, and 2000.”

What does this mean for India where the same hysteria is much in evidence? Well, part of the reason for the rising market indices could be the government itself. It has tried to stoke the fires. It possibly hopes, among other reasons, that a booming stock market will increase the attractiveness of India as an investment destination. It wants investments into manufacturing the soar. And initial public offerings (IPOs) have already begun taking advantage of this buoyant market mood to launch themselves to rake in the moolah. But, instead of equity investors, more speculators have moved in. Foreign funds have poured fuel over the fire. They too are flush with funds given the quantitative easing there. Yet, remember, they will be the first to take their money away at the first whiff of trouble. India is precariously perched. The government is technically right when it stated on January 1, 2021, that “GST Revenue collection for December 2020 recorded all time high since implementation of GST”. Markets, including economists, interpreted this as India having crossed the hump and that the economic downturn was behind us.

But wait a minute. Are GST collections really something to crow about? Haven’t people forgotten something. There is the Rs 20 lakh crore that needs to be accounted for that the finance minister earmarked for making India Atma Nirbhar. True the announcement was made in May 2020, but some of the financial schemes were being doled out from January itself.

What people forget is that any amount that is spent automatically results in GST collection. So, if you give Rs.100, you get back Rs.12 on an average as GST. Some rates are low, and some are high. Therefore, assuming an average of 12% would be fair. Therefore, this amount spent towards Atma Nirbharta should also be accounted for. And it is then that the penny drops. You realise that there is a Rs.3 lakh crore deficit in GST collections (see chart).

Thus, GST collections for 9 months on the Rs.20 lakh crore funding announced by the government should result in additional GST collection of Rs.1.8 lakh crore. Obviously, therefore, there is no need to crow about GST collections. Even if one reduces the GST on Atma Nirbhar by half, it still comes to Rs.90 lakh crore. That will still mean a deficit of 2.1 lakh crore.

But why did GST collections fall short of the required expectations? Talk to experts and they will tell you that this happens under three conditions – in India.

First, the money was not spent at all. Thus, if no money is spent, there will be no GST collection.

Second, the money was siphoned out of India. This is quite a possibility in India because -- as these columns have pointed out in the recent past -- the government itself has created a brilliant money laundering avenue by insisting that Aadhaar and PAN cards be linked. Much of the money could have gone out through the hawala route since the government itself, in March 2018, allowed political parties to get foreign funds without any questions being asked. The possibility of such funds being taken out of India and returning as FPIs cannot be ruled out.

A third cause could be that the recipient of such money locked it away in their bank accounts or vaults, thus not spending it. Hence no GST became payable.

There is a fourth possibility as well -- which we have refused to consider – that the tax collection department was inefficient at its work.

Look at it any way, all the three possibilities are counter-productive to the economic environment. So why the hype about the GST receipts?

There are other indicators which should make India a bit worried. 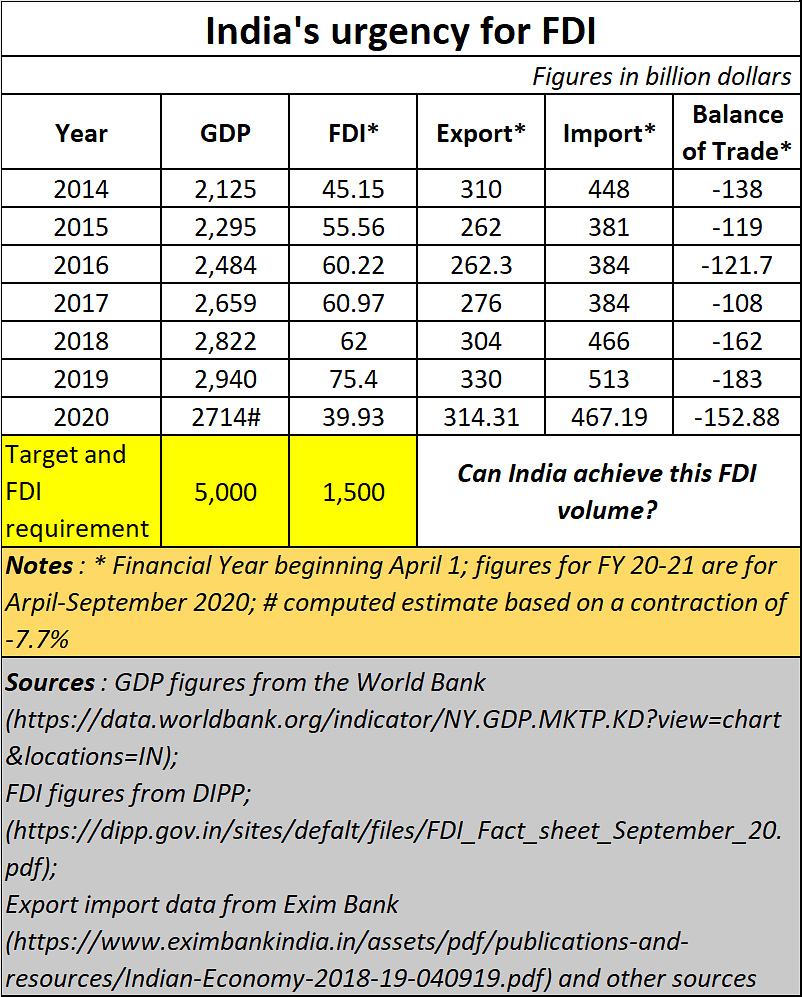 Just look at the poor FDI (foreign direct investment) inflow. The markets are on fire because the government has encouraged foreign portfolio investment. But its record on the FDI front is terrible.

The trouble with FPI flows is that when too much money chases few investment opportunities, a flare-up in prices is inevitable. But such money is skittish. There is no telling when it will run away.

Yet, watch how FDI has not beyond $80 billion a year. To become a $ 5 trillion GDP economy, India will need FDI inflows of around 1.5 trillion year-on-year. This is because around 30% of the GDP is estimated to come in through investments. Even if some of this is met through domestic investments, foreign investments will be sorely required.

But India appears to be shooting itself in the foot because it has opted to dampen the investment climate by challenging arbitration awards in Singapore or elsewhere. India desperately needs predictability of laws and business rules. It needs quick dispute resolution and the ability to hire merit without reservations. This is in addition to investments in human capital, where India has been found wanting.

Then there are the trade indicators which should dampen market enthusiasm. Look at the way India’s imports have generally been larger than exports. Last month, India registered the highest trade balance in 25 months. 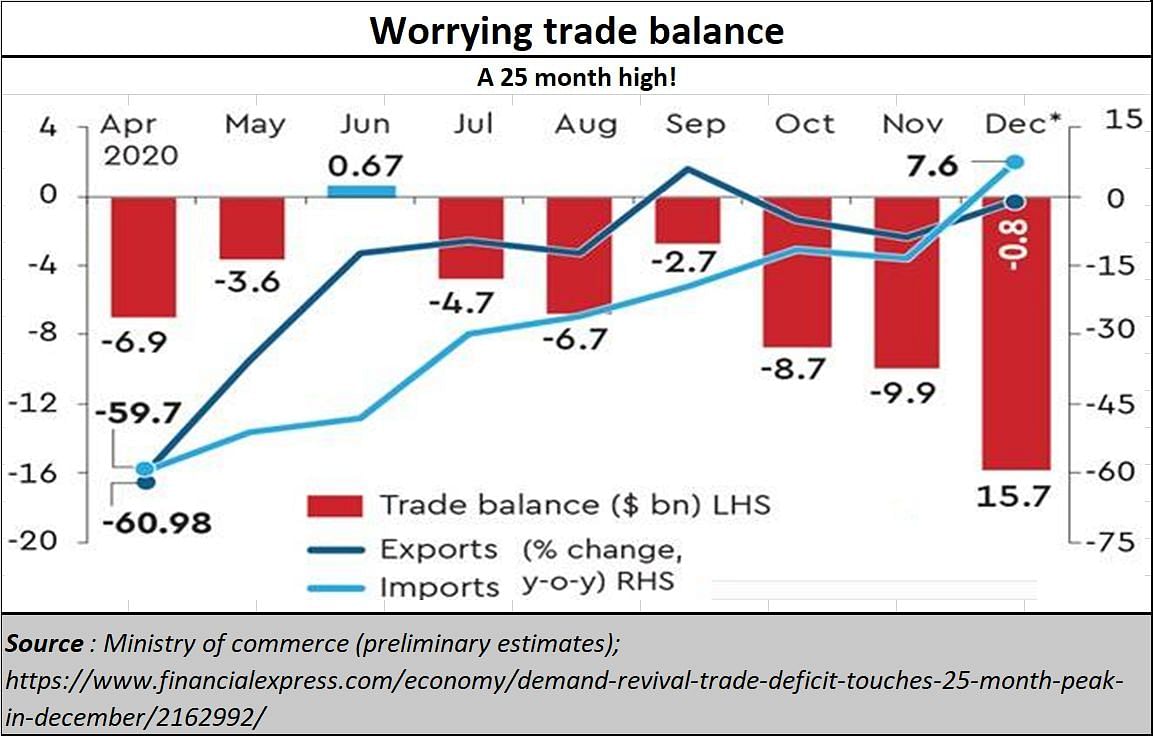 Much of the money that came in through the Atma Nirbhar schemes was meant to indirectly act as an export subsidy and thus boost exports. Clearly, that strategy has just not worked.

Given the poor FDI inflow into India, and a negative trade balance, there are more reasons to worry about India than be euphoric about it.

Finally, look closely at the banking sector. Except for a few stray moves that appear to strengthen banking, there are indications that this sector could be in bigger trouble than has been the case till now. There are many reasons for fearing the worst. The first, as discussed above, is the government’s extreme keenness to link PAN and Aadhaar to bank accounts. 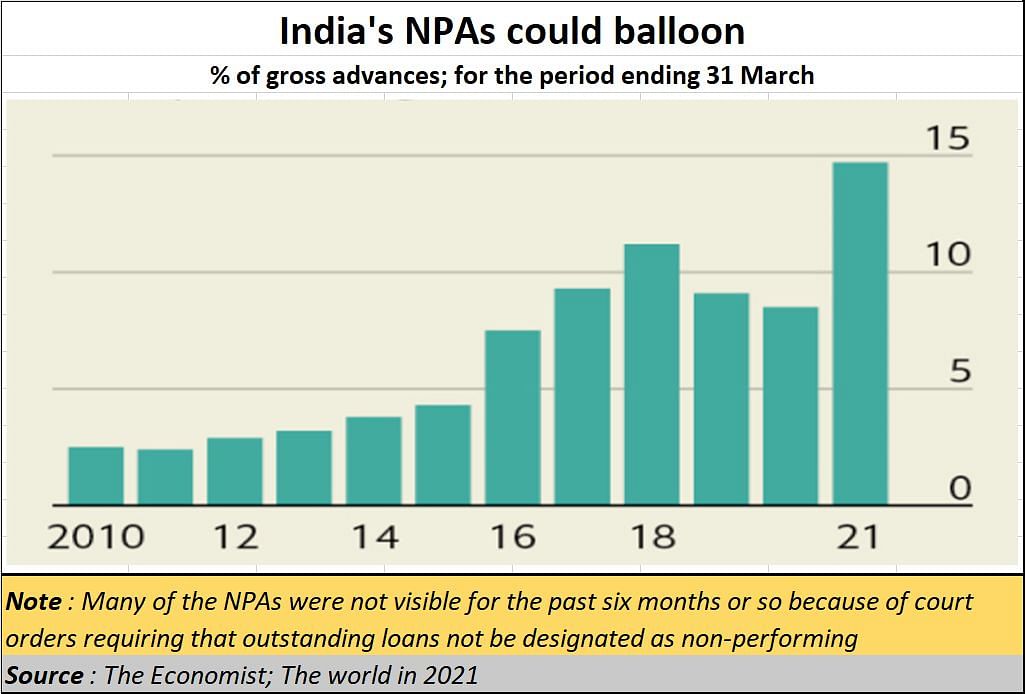 In fact, as early as in October 2017, the Reserve Bank of India (RBI) had indirectly absolved itself of the responsibility for linking Aadhar to bank accounts. In a carefully worded press statement it said, “The Reserve Bank clarifies that, in applicable cases, linkage of Aadhaar number to bank account is mandatory under the Prevention of Money-laundering (Maintenance of Records) Second Amendment Rules, 2017 published in the Official Gazette on June 1, 2017. These Rules have statutory force and, as such, banks have to implement them without awaiting further instructions”. Clearly, the government had used other laws and statures to link Aadhaar to bank accounts and now wants the link Aadhaar to PAN Cards. That, as mentioned earlier, could create one of the biggest money laundering machines in India’s history.

Together, they have put pressure on exchange rates. They have also adversely affected India’s chances of becoming an effective solution to the China + 1 strategy that the Western world has been pursuing. It is quite likely that other nations will become outsourcing hubs instead of India. This country may still become a manufacturing hub for some products, but not on a scale that could have been possible.

Moreover, there are other areas which make the global financial and economic climate very volatile. The first is the likelihood of inflation becoming a big headache. Says Louis-Vincent Gave, CEO and co-founder of Gavekal Research, Inflation will come back with a vengeance. He also expects the dollar to plummet by around 20%. That could make Indian exports all the more expensive. As things stand, India’s unwillingness to let the rupee become stronger has already compelled the US to list India as a currency manipulator.

Finally, there is the problem of Indian legislators spending more and more legislative time on non-economic issues. If it is “love-jihad” in some states, it is a ban of beef consumption in another. All these fritter away the energies a country must conserve to tackle the economic crisis. That is a lesson Indian politicians and bureaucrats haven’t learnt as yet.

Somehow, India must get its act together. Till it does so, surplus liquidity or not, the markets will remain on edge. There are reasons to be a little less bullish, and a lot more bearish.

But speculators often have perspectives that do not always adhere to principles of economics or common sense. And with more foreign money continuing to flood Dalal Street, expect the flareup in the stock markets to continue.