One could call it bittersweet. There are plenty of reasons for feeling happy, even euphoric. By Friday last week, the stockmarkets had revived – after initially slumping. The BSE Sensex had crossed the 60,000 mark to rest at 60059.06. Marketmen believe that the equity indices could soar further. This author has his fingers crossed for reasons that will be explored later.

As this column showed last week, the job scene in India has begun to show signs of life. But as we also pointed out, the total fresh employment from 2013-14 to 2020-21 stood at just 7 million. India needs at least 12 million new jobs to be created each year. The backlog is daunting. Then there was good news for most Covid afflicted people. The Supreme Court ordered the government to pay a compensation of Rs.50,000 to families for every life lost to Covid. More importantly, it ordered the amount to be paid irrespective of whether Covid was mentioned in the death certificate or not. That will actually bring cash in the hands of people who were savagely afflicted by Covid deaths. Many had already spent a fortune in trying to treat their relatives.

It remains to be seen if people who cast the bodies of dead relatives into the Ganges (or other rivers) will get this money – they may not even have received death certificates from the authorities. This issue may come up before the courts once again.

Nut money in the hands of rural folk could trigger a huge consumer wave. That would be good both politically as well as economically. It will also be because small folk do not want to keep their money in the banks any longer. The rate of inflation is higher than the interest on savings, thus translating into a negative income. So, they will buy goods. Some may get into stocks. But that will take some more time.

Loans to individuals began soaring. This was despite credit offtake by the corporate sector did not take off as expected. Most of the loans were for building homes, or for personal items of consumption. That could bring some cheer to the forthcoming Diwali and Dussehra. For two years, the most popular festival in India has been subdued. Maybe, things will turn for the better this year. That could trigger demand for many household items. After all, new homes need a variety of things to make them liveable – right from pots and pans to furniture. 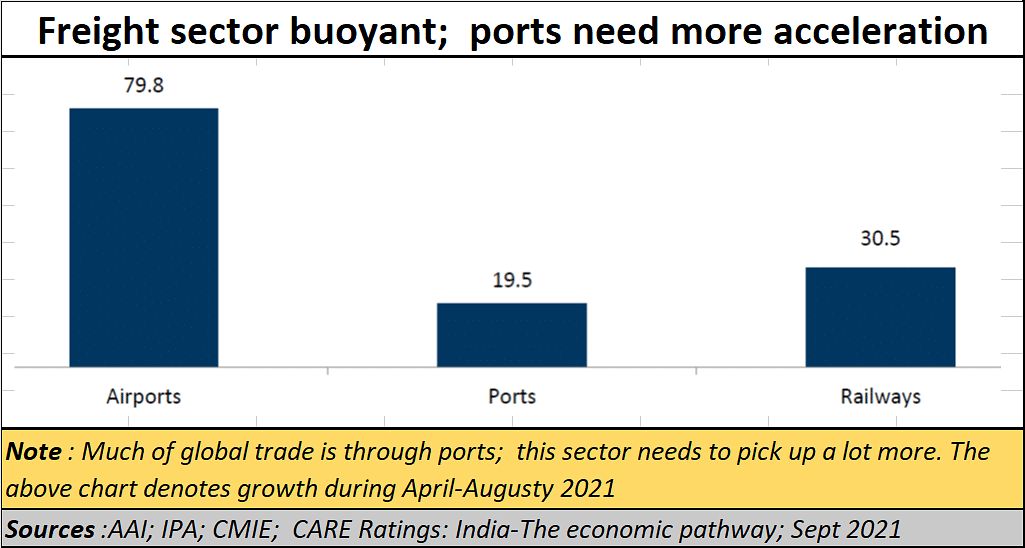 But loans can be messy – especially the buy-now-pay-later (BNPL) seductions. This is an excellent market strategy when the economy is on the upswing. Yet, that cannot be taken for granted right now. True, Moody’s Investors Service changed its outlook on India's sovereign ratings to stable from negative. But it has retained its rating at 'Baa3' -- which is the lowest investment grade, just a notch above junk status.

This is also evident in the freight indicators. Once again, all forms of freight appear to be on the upswing. That is good news. However, there is an urgent need for port traffic indicators to grow a lot faster. More than three-fourths of global freight is by ships. Hence, port freight remains a crucial indicator to an upwardly mobile economy. That has yet to happen. Maybe, it will take time. But, caution is needed right now.

There are two indicators that appear quite worrying.

The first is the revelation by UNESCO’s ‘2021 State of the Education Report for India’. It pointed out that almost 19% or 11.16 lakh teaching positions in school remain vacant. Almost 69% of them are in rural areas. 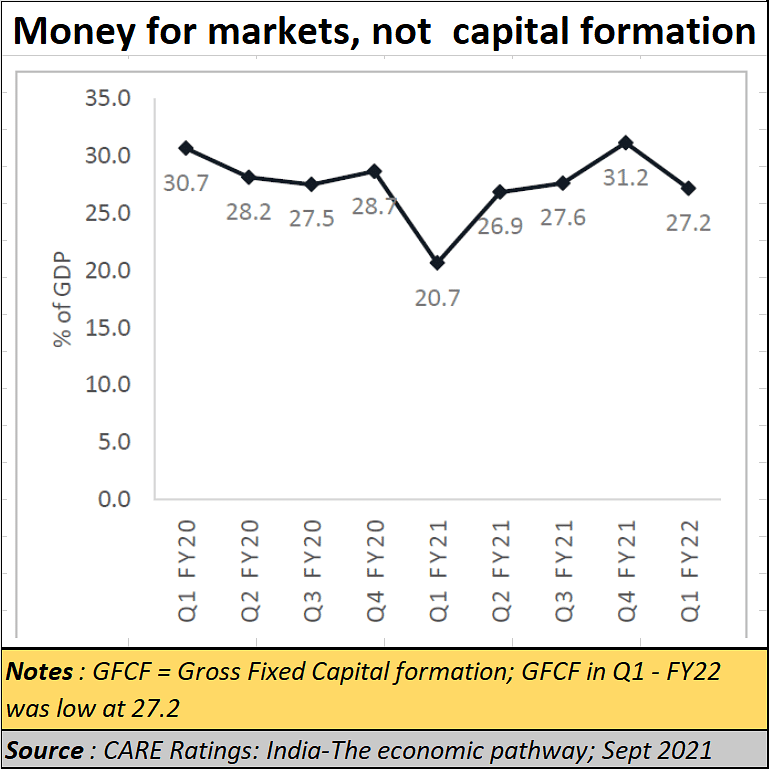 The government itself was forced to admit before the Parliament (Lok Sabha) that there are 92,275 government schools with just single teachers -- teaching in them at both the primary and secondary levels combined. That could puncture the balloon of a resurgent economy. Without education (and health) India’s biggest resource –its demographics – could end up becoming a huge liability.

The second indicator which should make market bulls a bit wary are indicators suggest a hyped-up market. Even though there is a continued inflow of funds into the stockmarkets, thus propping up the indices, little of that money is finding its way into capital formation. Without capital formation, new jobs ill not get created, and new productive capabilities do not materialise. At present all the gains that high networth individuals (HNIs) make in the stockmarkets appears to be going into real estate. That could explain the surge in the sale of premium flats in major cities. As mentioned above, bank deposits are a no-no because of the negative real interest factor. Ideally, this money should be going into capital formation. But it isn’t. That is worrying.

Now marry the lack of focus on quality education (along with poor spending on both education and healthcare) on the one hand, and poor capital formation on the other, and you have a perfect recipe of an inflated market with little substantive depth to back up this euphoria. Then take the poor job formation numbers, and you realise that there is a need for all these factors to be addressed simultaneously.

Market punters constantly talk about the huge potential Indian markets have. Yes, they do. But the reason they give is often the wrong one. They point to the poor penetration of investors in Indian stockmarkets. This figure can be highly misleading. The ability of people to invest in the markets is often determined by the amount of money he earns. That is where per capita income becomes important.

Unless a person is a compulsive gambler, he does not invest in speculative opportunities till he has some disposable income. Else he looks to lotteries, where the spend is very small and -- even though the chances are impossibly remote -- the dream of hitting the jackpot is irresistible. That is one reason why most lottery ticket buyers are from poorer segments. Stockmarkets require larger investible funds.

By not investing in education (and healthcare) the government has not increased the chances of poor people getting higher incomes.

And this is where we need to study the last chart in this column a bit more carefully. The chart is a bit old, and the market capitalisation has soared higher since August 21. But the trendline points to a more precarious market. The market-capitalisation-to-GDP number could soon dwarf earlier peaks.

When this number goes out of sync with ground realities (which is what the GDP number indicates), the fall can be precipitous. This could put a spanner in the government’s ambitious disinvestment programme on the one hand and could leave small investors with a rotten feeling of being let down. The markets have begun seeing new investors being lured to invest in the capital markets. If they get hurt, it will jeopardise the personal loan market, make the banks more precarious, and spoil the investment climate for a long time.

The government needs to quickly rein in the capriciousness of SEBI, RBI and the NCLT and make the markets more attractive for promoters and investors. Driving away startups like Freshworks to the Nasdaq is not a vote of confidence, though some Indians may see this a good cause for chest-thu8mping. The government also needs to ease the tensions that it has itself created – both in the North-East (where one chief minister even said that the courts need not be heeded), and on the farm front.

It needs to create more medical seats, and work on ways to improve the quality of education at schools.

That is a lot of work to do. And it is hard. But it can be done. It needs the government to stop fragmenting society, and get all hearts and minds to work towards rebuilding India.

If the GDP begins climbing, the stockmarket peaks (as a percentage of GDP) will cease to matter, as the peaks will get muted. GDP and per capita incomes are the key indicators that matter. If they are not boosted, there will be immense pain. Why are humans becoming increasingly violent?

Industry in the era of social justice