HomeAnalysisPolicy Watch: Signs of life on the employment front

Policy Watch: Signs of life on the employment front

There are stirrings of life on the employment front. That could explain why the government nis willing to now become more proactive in sharing information about employment trends. After maintaining total silence on employment numbers, the government has finally decided to come out with a quarterly employment survey (QES) which is focussed on nine sectors.

The report that the survey has come up with has some interesting numbers – though one wishes that there were more detailed numbers, and not just percentages for many of the tables. The report can be downloaded from https://static.pib.gov.in/WriteReadData/specificdocs/documents/2021/sep/doc202192701.pdf.

According to this survey, the employment market is actually alive and kicking. Some of the numbers are quite interesting: That there are over 187million vacancies in these nine sectors that the survey has covered.

Of these, 33% of the vacancies were on account of resignations (possibly migration to other jobs, or incompetence); 28% on account of retirement. But around 39% appear to be new jobs, which indicates a growing market.

If these numbers are true, India could soon witness a surge in employment numbers. But there is one problem. There is a huge backlog of unemployment since 2014 – where job growth has not kept pace with population growth. Consider the table alongside, which has been culled from the same QES report. For instance, the survey suggests a growth in employment from 2.37 crore in these nine sectors between 2013-14 to 3.08 core in 2020-21. That might look impressive, but it means that only 0.71 crore jobs were created during these seven years. That is a very small number. India needs to create at least 1.2 crore jobs each year, given its population size and a population growth of 2% each year. Hopefully, the new jobs that the report talks about should ease some of the problems.

Then there are other findings that appear to be interesting, and worth noting. The first, is something that almost all people were aware of, but which has now been ratified by a government report. It is that while most industries do not depend overly on contractual labour, three sectors critically depend on such arrangements.

The three sectors are construction, manufacturing, and transport. It is possible that the share of contractual labour in the transport sector may have been understated. While all state transport, trains and corporate personal transport engage people on a regular salary basis, there is a huge contingent of workers plying trucks, heavy machinery and smaller transport vehicles that are essentially contractual labour. Another sector where the percentages appear to be understated is the restaurants and accommodation sector. Ditto with trade. 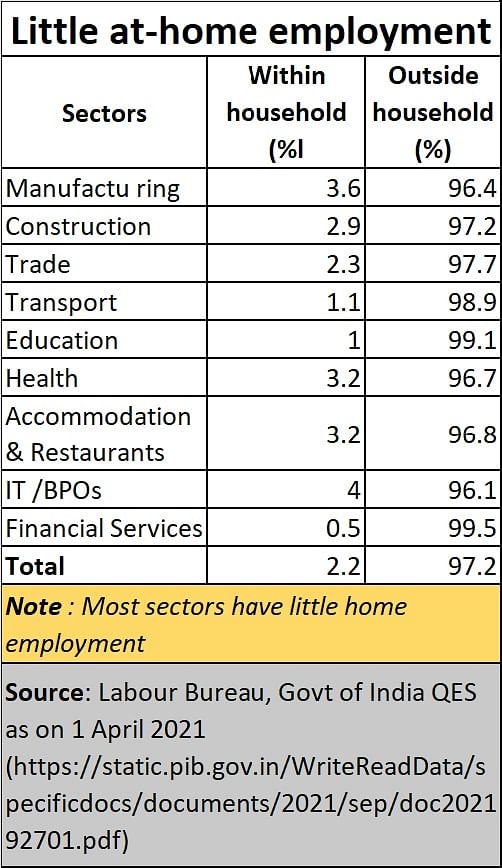 But that is the nature of these sectors. Their employment requirement goes up or down depending on market conditions. If the economy is on the upswing, and sectoral demand is high, the number for contractual labour increases. It diminishes when demand for such activities slumps.

It underscores the need for all labour laws to take this factor into account – because a one-size-fits-all policy will just not work.

Another interesting fact is that most employment is away-from-home. Much of employment, even for proprietorial businesses, is away-rom-home. The only exceptions to this rule are personal drivers, and house helps. But collectively, their share is bound to be significantly less than the share of people employed in establishments which are strictly for business.

All said, the government’s effort in making this a quarterly survey must be welcomed. The country needs to know, on a regular basis, the current position of employment. And it is possible that in due course of time, some of the data may get modified and even sharpened -- both in their analysis and scope.

But there are signs that the QES may not be entirely accurate about the number of employment vacancies. This is because, another employment report, brought out by CARE Ratings, points to a weakness in labour markets. Of course, it must be mentioned here that this analysis is based on the data provided by 969 companies across 30 sectors. For the financial year ended March 2021. Yet there is no denying that the sample companies include some very large employers. This analysis, as CARE Ratings points out, throws up some very interesting findings:

Only ten industries had witnessed growth in employment in FY21 over FY20.

The staff cost increased by a more modest 4.1% for the sample companies compared with 9.2% in FY20. It is quite possible that the combined effect of Covid and economic slowdown compelled employers to go easy on worker increments.

The average pay increased by 6.2% in FY21 from Rs 9.30 lakhs to Rs 9.87 lakhs. Of the sample of 969 companies 516 had increased their average pay while 427 had lowered the same. Twenty-six had virtually no change in the average compensation.

An anomaly was in sectors where average pay increased sharply but employment numbers declined. These include crude oil, iron and steel, non-ferrous metals, trading, insurance. Media too – where the increase in average pay was above 10%.

CARE Ratings believes that that 2022-23 will witness more generalized increase in employment in the corporate sector as growth in FY22 will be localized to industries that are already on the high growth path like BFSI, pharma, FMCG, metals, chemicals, among others. Services, in particular, would trail as even after 6 months of the budget year have passed; they are still to reach an optimal utilization level with several restrictions in place.

That green shoots are now emerging is also borne out by CMIE data which also shows an uptick in employment. Whether it is as rosy as the QES tries to make things out to be remains to be seen. Mumbai – city of despair and repairs

The great lifts of privilege