Policy watch: Hydrogen could be the next big energy source

As the EIA puts it, “Each atom of hydrogen has only one proton. Hydrogen is also the most abundant element in the universe."

On 3 February 2022, Japan’s energy agency NEDO, decided to hold a webinar on Hydrogen and the Fuel Cell perspective in Japan. It was one of the first attempts by any country to publicly discuss the future significance of Hydrogen in the world. This topic could play a significant role even at the Expo 2025 in Osaka. The theme of the Expo is “Designing Future Society for Our Lives”. It is scheduled to be held from 13 April to 13 October 2025.

While discussions are generally calm and ideas exchanged rather dispassionately, a fierce hydrogen rivalry is raising its head in the world, more particularly in India. But more on that later.

Hydrogen is the simplest element. As the EIA puts it, “Each atom of hydrogen has only one proton. Hydrogen is also the most abundant element in the universe. Stars such as the sun consist mostly of hydrogen. The sun is essentially a giant ball of hydrogen and helium gases.”

It is respected for offering the highest energy content of any common fuel by weight. It packs three times more energy than gasoline, explains IEA but it has the lowest energy content by volume (about four times less than gasoline). But when it is compressed and liquefied, it becomes heavier, and can release immense amounts of energy. That also explains why almost all rocket fuels use compressed hydrogen. It was first artificially produced in the early 16th century by the reaction of acids on metals. During the latter part of the 18th century, Henry Cavendish discovered that it produces water when burned. That in turn gave it the name based on the Greek word which means "water-former”. The symbol of Hydrogen is H, for water is it H2O, and for ammonia it is NH3. It is used by refineries, steel, and fertiliser plants and even power plants.

It was important enough for it to be taken up as a subject at COP23 in Bonn – in November 2017 -- where 18 key leaders in their industry verticals, united in the Hydrogen Council coalition. They launched the first ever globally quantified vision of the role of hydrogen, developed with support from McKinsey. The deliberations showed that in addition to being a key solution to global warming, it had the potential to develop US $2.5tn of business, and create more than 30 million jobs by 2050.

But five years later, in 2022, the timelines appear to have been shortened. Immediately after the COP23 meetings, Japan was one of the first nations to draw up a timeline for itself. In December 2017, former Prime Minister of Japan, Shinzo Abe pushed for a “Basic Hydrogen Strategy”. At that time the 2050 vision was to position Hydrogen as a new energy option along with other renewables. It also set a goal for itself to make this gas affordable at $3/kg by 2030 and then to 2/kg by 2050.

But the planners had not reckoned on the way solar costs would continue to plunge, as would battery costs as well. Conventionally, hydrogen is created either through reforming methane or hydrocarbons or through electrolysis. The former allows carbon to get generated, so is not the best solution for reducing emissions. The latter has been too expensive. But with solar costs dropping even now, making it cheaper than thermal power, using solar energy for electrolysis could become the most probable route. Another route could be wind or wave power. The latter has the potential of becoming immensely popular. Hydrogen is used mostly in refineries, explosives, fertilisers and for rockets.

Adani, Ambani and others

But now large facilities are being created for production of hydrogen on a massive scale In November 2021, Gautam Adani, speaking at the Bloomberg India Economic Forum, said that his group would invest USD 70 billion over the next decade to become “the world's largest renewable energy company, and produce the cheapest hydrogen on the Earth.”

Not to be outdone, in mid-January, 2022, Reliance Industries, led by Mukesh Ambani, let it be known that it will invest INR 5 lakh crore (US$67.6 billion) over 10 to 15 years to set up a 100 GW renewable energy power plant and green hydrogen eco-system. It would also invest additional sums in related projects causing investments in renewables to cross $75 billion. Reliance also said that it would bring down the price of hydrogen to under $1 per kg. That would be less than the projected $2 a kg by 2050 envisaged by Japan.

At around the same time, POSCO – the South Korean steel giant – announced that it had signed a Tripartite MOU on Jan. 18 to enhance green hydrogen project collaboration at the Saudi Arabia-Korea Investment Forum for Smart Innovation & Growth. The event was held at the Ritz-Carlton hotel in Riyadh, Saudi Arabia, with President Moon Jae-in in attendance. It said that an economically ideal business site will be selected, and a project feasibility review will be completed within this year

“Saudi Arabia, which can produce new and renewable energy at the lowest prices in the world, is an important region to POSCO, which is planning to produce large amounts of hydrogen,” said Byeong-og Yoo, Head of Industrial Gases & Hydrogen Business Unit at POSCO. “We will successfully establish a hydrogen production model in Saudi Arabia and take an early lead in the hydrogen business,” he added, expressing his hopes for the project.

Meanwhile, POSCO is promoting hydrogen projects with the vision of jumping into the ranks of the global top 10 players in hydrogen production by producing a total of 7 million tons of hydrogen in 2050. In the mid-term, POSCO will invest KRW 10 trillion (US$ 8.3 billion) to establish a 500,000-ton hydrogen production system by 2030. To this end, it is spurring the internalization of the core technologies required to establish a global hydrogen supply chain and secure a competitive edge over the top 7 strategic countries.

Suddenly you have large groups talking about producing the cheapest hydrogen in the world, and setting up capacities that nobody had envisaged in 2017. Expect the share of hydrogen to soar in power generation. No estimates are available currently. Even the IEA website has nothing to say about these developments at the time of writing this article. 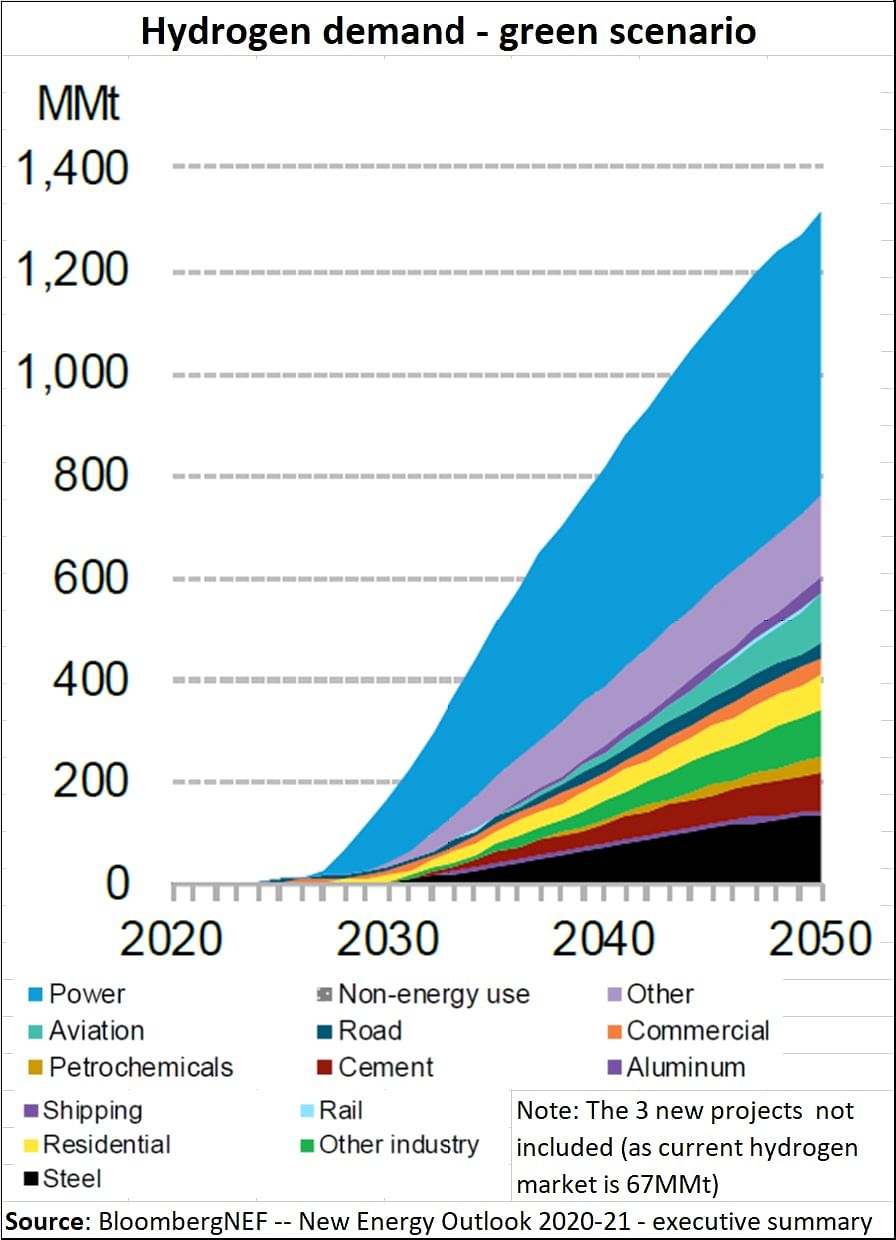 BloombergNEF too states that hydrogen demand could soar immensely. It stated this in its report of July 2021 (see chart) but (obviously) had not considered the capacities that we have spoken about above.

However, in its report of January 2022, it stated that the number of countries with a hydrogen strategy doubled last year to 26, and expected plans from the U.S., Brazil, India and China could reshape the global market.

Little is known of China’s plans. However, according to sources in Japan’s NEDO, China has agreed to share its hydrogen plans soon. That should be interesting because China is the largest player in the solar energy space, and is a large consumer of hydrogen itself (especially for its steel and fertiliser units). Moreover, it would like to reduce its dependence on hydrocarbons for strategic and environmental concerns.

Evidently, hydrogen could thus be expected to play a bigger role than the 18% earlier estimated.

Obviously, reaching a $1 price point will require a dramatic drop in the cost of electrolysers, the equipment needed to make green hydrogen, according to Debasish Mishra, a Mumbai-based partner at Deloitte Touche Tohmatsu. But if one looks back and thinks about how solar panel costs dropped when China stepped in, and the way battery and electricity storage costs are tumbling, such price drops are not impossible. Adds Eiji Ohira, spokesperson for Japan’s New Energy and Technology Development Organisation, or NEDO, “I recognize that large-scale hydrogen projects are about to start around the world. Japan is also considering various international cooperation projects. I suppose you will be able to see it soon.”

That is why there will be a great deal of interest in Japan’s Expo 2025. After all its theme calls on each and every individual “to think about his or her own aspirational life, empower them to realize their full potential, and push forward the worldwide effort to creating a shared vision of a sustainable society.”

As for India, the race to be the biggest hydrogen producer will be keenly watched. But as of now, Gautam Adani appears to have the edge.

According to Mercom India, when it comes to solar power installations (not paper plans), “Reliance currently has 146 MW of solar projects in operation and Adani has 5,250 MW.” Solar is critical if costs for producing hydrogen have to be brought down to $1. Another factor will be access to waterfronts. Adani has ports and coast-based power stations. That allows hydrogen to be created by breaking up sea water into hydrogen and oxygen and capturing the former. However, both groups have immense access to technology and can be innovative.

And it is worth remembering that of all the countries in the world, Japan has an edge in fuel-cell technologies, considering that Toyota has been running the hydrogen powered Mirai cars for almost a decade. The Mirai was unveiled in November 2014 at the Los Angeles Auto Show. As of December 2019, global sales totalled 10,250 Mirais. This author has driven around in a Mirai in Tokyo and has seen the hydrogen fuel stations at work.

Moreover, with tumbling costs for hydrogen and fuel cells, expect this technology to compete with EVs.

Expect a great deal of churn in the market very soon. 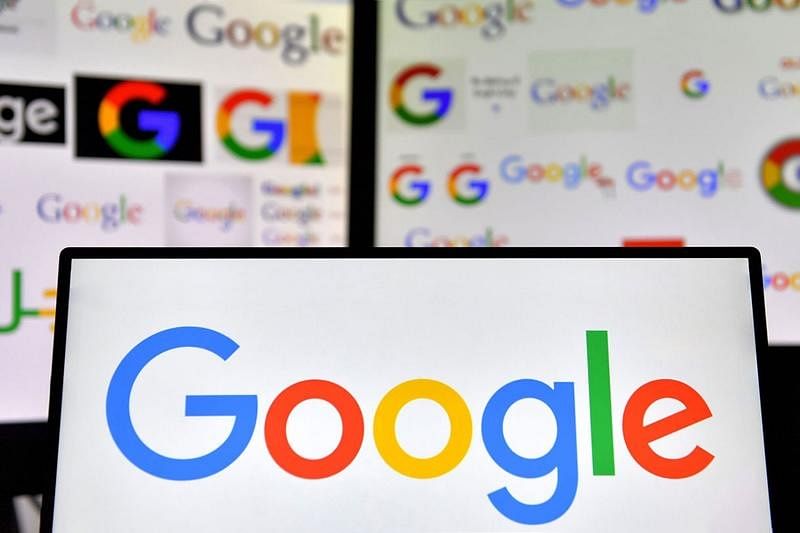 HomeAnalysisPolicy watch: Hydrogen could be the next big energy source