HomeAnalysisPolicy Watch: Is Google using its power and popularity responsibly?

Policy Watch: Is Google using its power and popularity responsibly?

When Google first sought listing almost 30 years ago, financial analysts were stunned when they reading the listing document. In that Google had said that it sought to raise around $100 a share and hoped to sell around 25 million shares ($2.5 billion) at the turn of the century.

Google is expected to do the unusual all the time. It has many firsts to its credit. It changed the search engine ecosystem. The music video environment. The way mobile phones should operate. And the list goes on. But now, given its sheer market dominance, it is under scrutiny by regulators in the EU and the US (among other places). This time, it is being queried by the Competition Commission of India (CCI) for its unfair practices in the media space. And the questions that are being raised (and not raised) could actually raise some very disturbing issues, with huge ramifications for both Google and the media industry.

When Google first sought listing almost 30 years ago, financial analysts were stunned when they reading the listing document. In that Google had said that it sought to raise around $100 a share and hoped to sell around 25 million shares ($2.5 billion) at the turn of the century. What shocked them was that it also stated that it did not really know how it would use the funds, because its promoters were working on some rather unusual concepts. 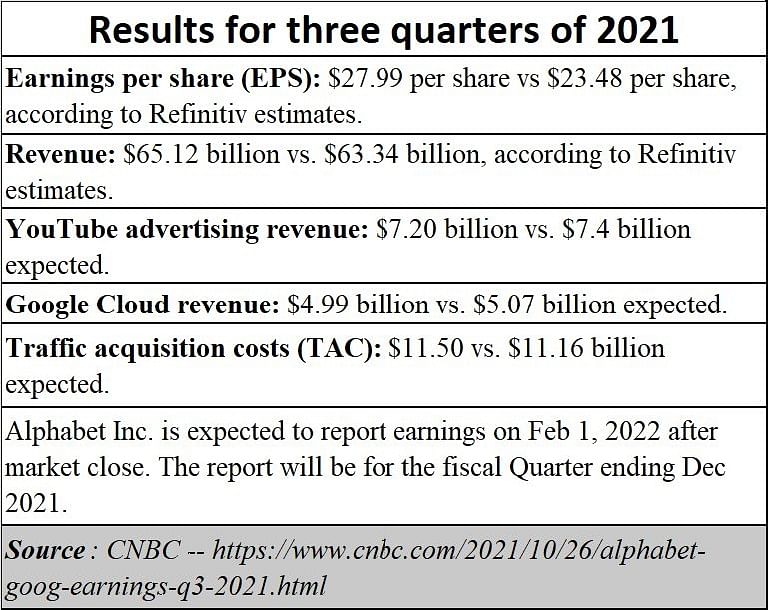 Google hasn’t looked back since. Its three quarters of 2021 results show how successful it has been (see chart) . And people have begun waiting for the end of January to hear the full year’s results.

Ever since the days when it got listed, its search engine business has grown and expanded to cover a vast variety of products and services.

It offers a range of services (see box) that it had not even envisaged in its infancy. As its services expanded, so did its revenues. And clout as well. With great success, comes enormous power. With power one expects immense responsibility. But Google, like all giants, appears to have forgotten how to be responsible in its quest for more even more profit and clout.

Today it straddles over the market with services that touche almost every part of human – and even corporate -- life.

That in turn has brought in the regulators – in the EU, in the US, in Australia, and now in India. On 9 November, 2020, the CCI finally sent out a report announcing its decision to investigate Google’s activities. 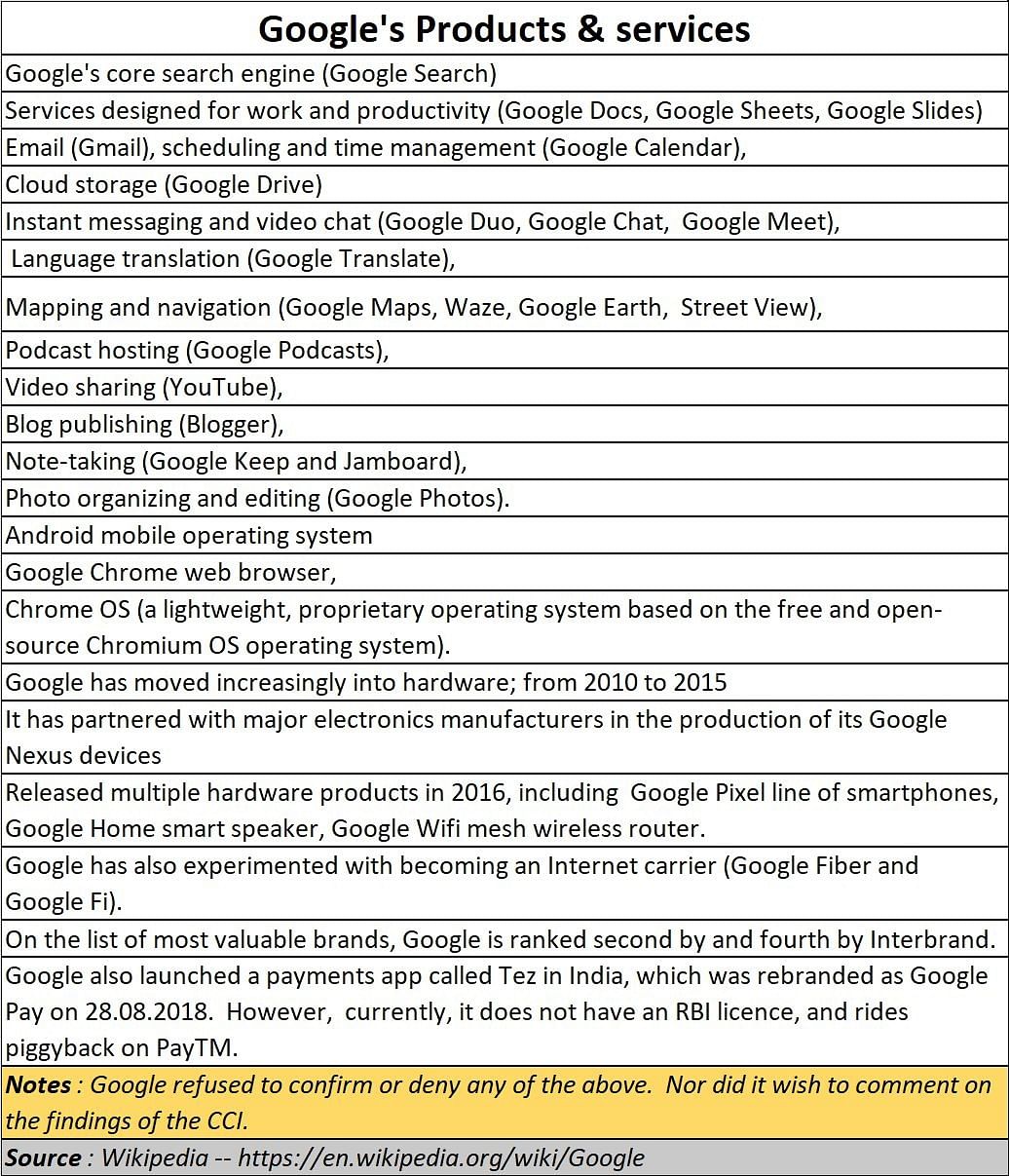 When contacted, Google’s spokesperson initially sought to allay fears by stating that the CCI move is not unusual. “They are doing their job. And we are doing ours,” he said. He said that the CCI has to be educated about the way the internet and e-services work. When queried further, he asked for a questionnaire to be sent to him. We did that. And then there was a wall of silence.

The questions we asked were quite direct:

The manner in which Google’s services and products interlock, and thus exclude other players. Is this true?

That Google has a Unified Payment Interface (UPI) based payment app called Tez in India, which was rebranded as Google Pay on 28 August, 2018. This was, according to the CCI document an attempt “to unify Google’s payment offerings globally under the ‘Google Pay’ brand”. Curiously, Google does not have a licence from the RBI to offer epayment services in India. While Amazon, PayTM and many others find mention in the RBI list both Google and Tez are missing. Everyone knows it rides piggyback on PayTM. Is this legal? RBI refuses to clarify. Nor does NPCI (National Payments Corporation of India. What is Google’s explanation?

The CCI document says that, according to the information it has received, Alphabet Inc (the newly formed parent of Google and other services) has a revenue of USD 116 billion in 2019. Of this almost 84% is believed to have come from advertising, demonstrating Google’s importance in leading the vision of Alphabet Group. Google refused to confirm or deny this. However, it must be mentioned that the figures we come across appear to be out of sync.

Google, through its control over Play Store and the Android Operating System (OS), is alleged to be favouring Google Pay over other competing apps, to the disadvantage of both i.e. apps facilitating payment through UPI, as well as users. Google refused to comment.

Google imposes unfair terms on users by requiring them to use Google Pay which is not in compliance with the data localisation directive issued by Reserve Bank of India and the guidelines issued by NPCI. Google is silent on this score as well.

Google says that its 30% (and in certain circumstances, 15%) service fee is not arbitrary. It is market based, legitimate, and pro-competitive as the service fee allows Google to cover third party fees and support its significant and continued investments in Play, including the vast resources it develops for developers. But this is an issue that is being battled in US courts as well. Even the EU is now panning to launch a much larger investigation into Google’s activities.

The probe by the investigative arm of the CCI has concluded that Google had “restricted” the ability of manufacturers to develop and reportedly sell alternative versions of its Android operating system.

According to news report, the Digital News Publishers Association (DNPA) has alleged that Google misuses its dominance in the news aggregation services market by not sharing data on the revenue it earns from advertising on news websites and only shares a small chunk of its advertising revenue in an arbitrary manner. That it “unilaterally decides the amount to be paid to news publishers” and also the terms of the same.

The DNPA is sore about the way Google has begun entering into selective deals with Indian media groups on the manner in which it will use their content. In return it pays them amounts that do not appear to be either transparent or even fair. Over the last few months, Google has signed three-year deals worth millions of dollars with Indian media houses like Hindustan Times, NDTV and Indian Express. 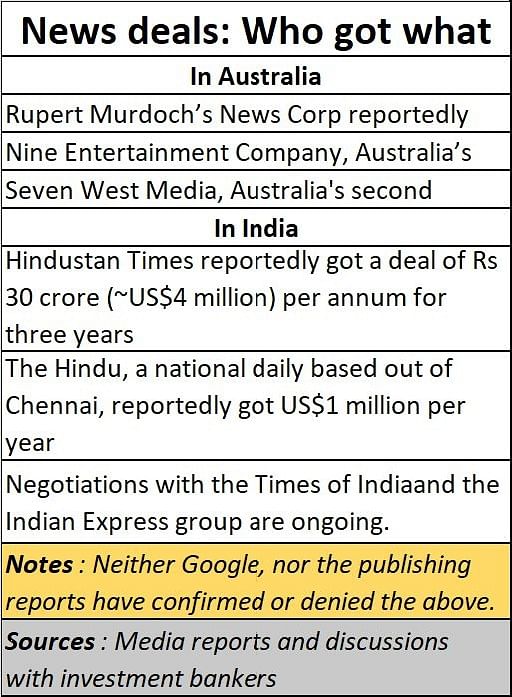 It may be recalled that this is the issue that almost got Google expelled from Australia – after which it settled with some newspaper groups.

Most of the terms have not been confirmed either by Google or India based media groups. The figures given here are just estimates that one gets from media reports and by talking to people in financial circles. Surely, Google needs to be both transparent ad fair. Moreover, unlike as in Australia, Google, in India, is not bound by any legal codes for such relationships.

Meanwhile, there is news that Google has filed a writ in Karnataka High Court seeking more time to reply to Competition Commission's queries pertaining to a probe into Play Store rules. According to some media reports Google has also extended the timeline for developers in India to integrate with Play's billing system to October 31, 2022.

DNPA’s complaint may finally get the CCI to seek to muzzle Google in much the same way that the EU and the US regulators are trying to do. This could include all revenues Google gets from traditional media companies and pure-play digital news players. Quoting a 2020 report by Dentsu, DNPA has stated that search advertising accounts for 25% share of digital advertising, and here Google exercises monopolistic control. Thanks to YouTube, Google also dominates the in-stream video advertising market, which accounts for 22% of digital ad revenues.

Maybe, depending largely on the way Goggle argues its own case, the CII will be compelled to look at other monopolistic and unfair trade practices adopted by other media players. The case against paid news has been festering for over two decades now. The question of whether telecom carriers should also become service providers is another subject few have cared to analyse. Just look at British Telecom, or AT&T, or Verizon. They do not offer Amazon like services or offer distance learning. Should Indian media players be permitted to combine a carrier business with retail commerce?

The CCI’s investigations have just begun, and it is obvious that the case will bring up many other complex issues that have been buried under the carpet for long.