Watch the presentations of some of the leading personalities in India, and you are persuaded to believe that India’s moment has arrived, that it is now unstoppable. Great words, yes. Laudatory vision, true. But please look through the effervescence, or let the bubbles pop, and the residue tells you that reality is a lot grimmer.

Let’s begin with one of the promising charts. It is by TV Mohandas Pai, in a presentation made in 2001 on India as a startup nation. The chart points to the fact that India has more internet users, and spends more hours on digital media, than most countries in the world. It suggests, therefore, that the country is a powerhouse for digital innovation. Maybe, that is true, especially if one looks at the number of unicorns that this country has witnessed in just 2022. You can download the chart. 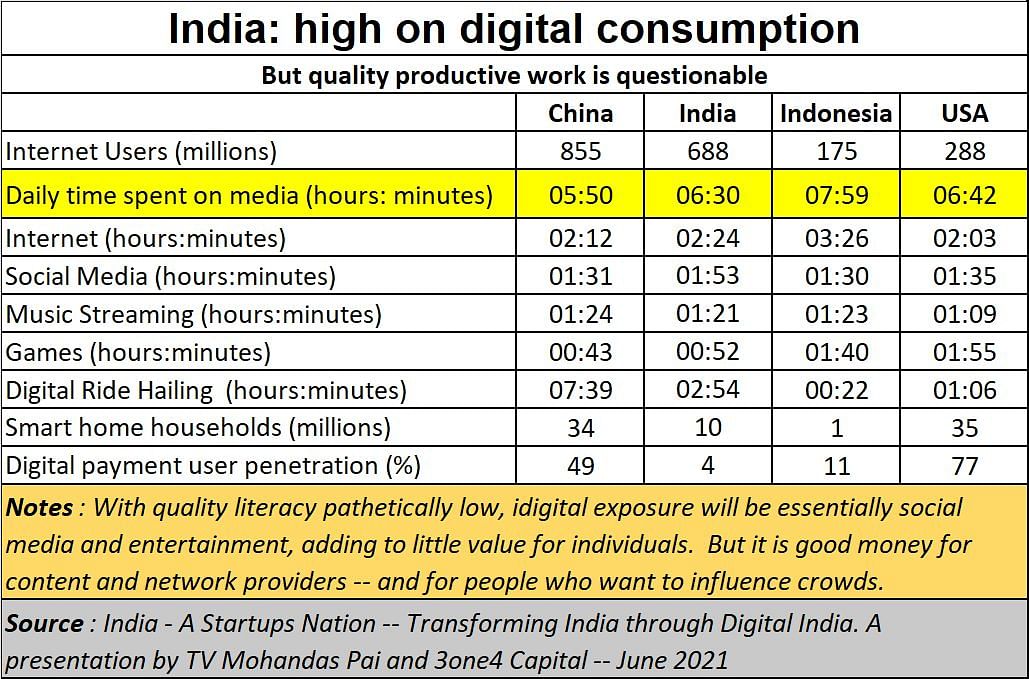 But anecdotal compilations suggest that much of the internet was on account of access to WhatsApp, Facebook, YouTube, and other social media. Little was by way of serious referencing. That may also be true the world over. But literacy levels are higher in many parts of the world. Literacy levels are plummeting in India. Government expenditure is shrinking, especially in the state which is supposed to be home to digital technology – Karnataka, or more specifically Bengaluru. 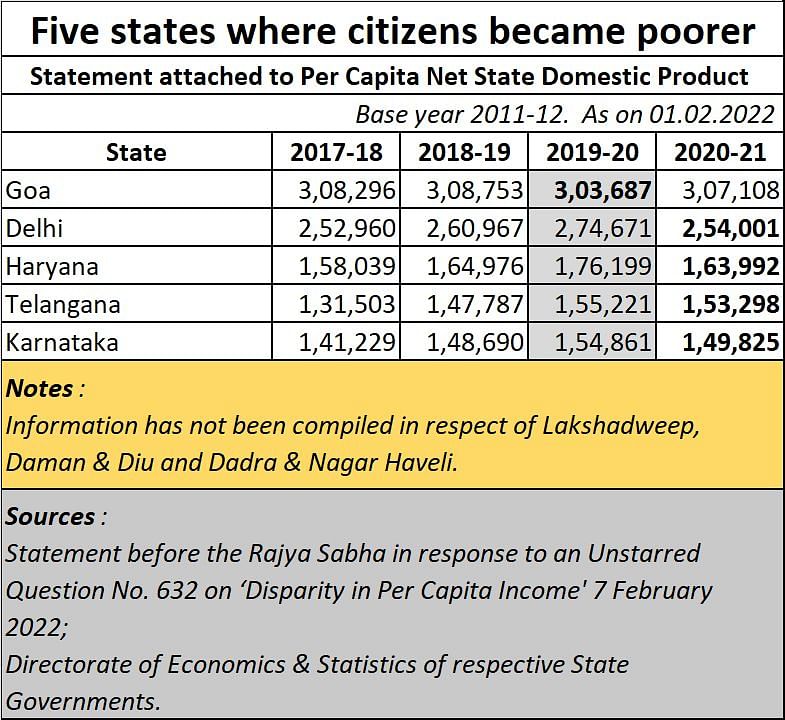 Lawmakers appear to be more obsessed with issues that actually divide people. Their focus on education, if at all, is only to use schools and colleges to incite people to think along communal lines or agitate over the content in textbooks -- though ostensibly it is often disguised as attempt to promote civil laws or quality education.

Just look at the numbers of the top five states where per capital GDP levels have actually fallen. It is not surprising to find Karnataka among them. This could have been ignored had it not been for the fact that this state was at the forefront in the anti-hijab movement, which assumed rather shrill overtones. And the fact that it focussed on educational institutions is all the more worrisome because it also underlines the scant regard lawmakers have for educational institutions.

What is worse is that surveys of education outcomes by bodies like UNICEF, UNESCO and the World Bank show how outcomes have begun falling in schools. One of the methods to look at educational outcomes was to see if students from higher grades could read and comprehend books meant for Grade 2 students. 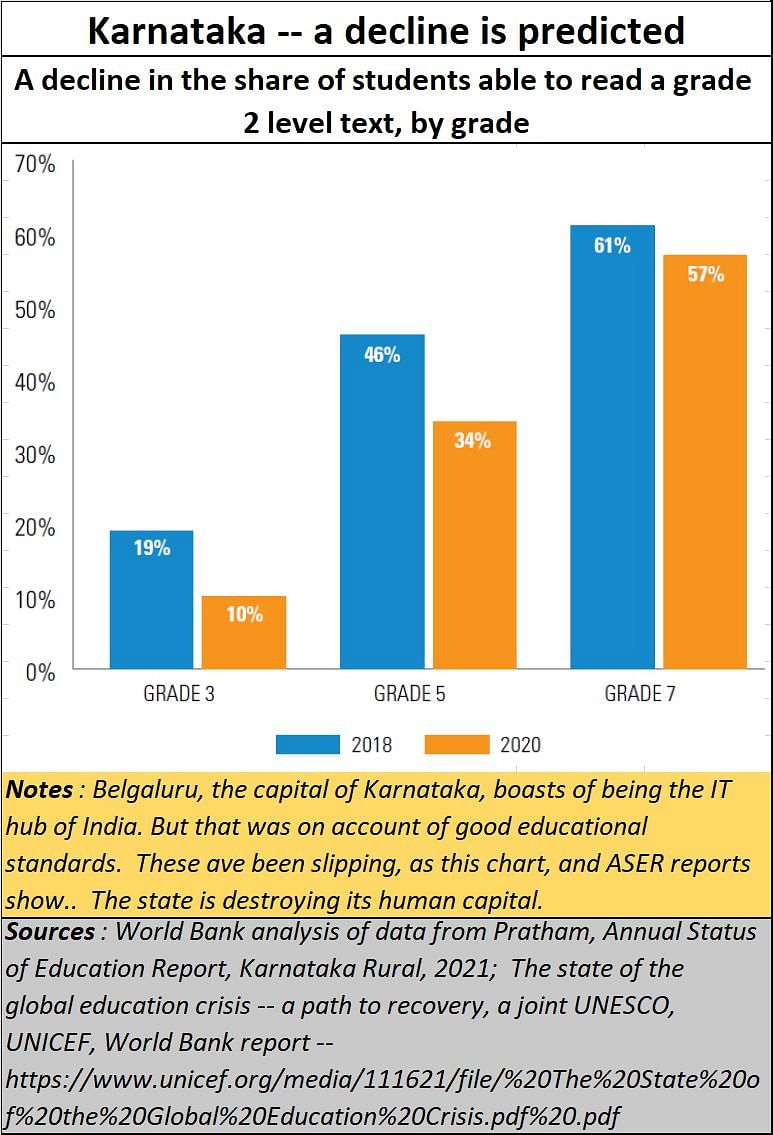 When it came to Grade 3 students, while 19% could read the books meant for Grade 2 students in 2018, this outcome fell to just 10% in 2020. When this same yardstick was applied to Grade 5 students, the outcome stood at 46% in 2018, but fell to 34% in 2020. When the same norms were applied to Grade 7 students, the outcomes fell, once again from 61% to 57%. There can be various ways one could interpret this data. But one thing is clear: Focus on education at school levels is slipping, alarmingly.

In fact, similar studies across the entire country have been carried out by Pratham’s ASER surveys. As a Pratham ASER report pointed out in 2018, only 44.2% of the children in Std V could read the books meant for Std II. The score had declined from 53.1% in 2008.

The declining state of education has been exacerbated by increasing levels of poverty. As these columns pointed out, India has done precious little during the pandemic to protect the poor. It succeeded in protecting the affluent, however. As a result, India’s middle class shrank, and the number of poor people swelled by 75 million.

This in turn has led many parents to pull out their children from private-schools where educational standards and basic infrastructure are relatively better managed, and instead admit them to government-owned schools, because the latter were more affordable. Thus, even though private education has remained an aspiration with many poor parents, shrinking incomes (loss of jobs plus inflation) left them with no other choice. The biggest losers were children, who had to suffer worse learning environments.

These have been well-documented by ed-tech bodies like Byju’s which has highlighted the findings from the ASER reports. These pages point out how there has been a significant shift in enrolment from private schools to government schools:

You can find much more information from the ASER reports. 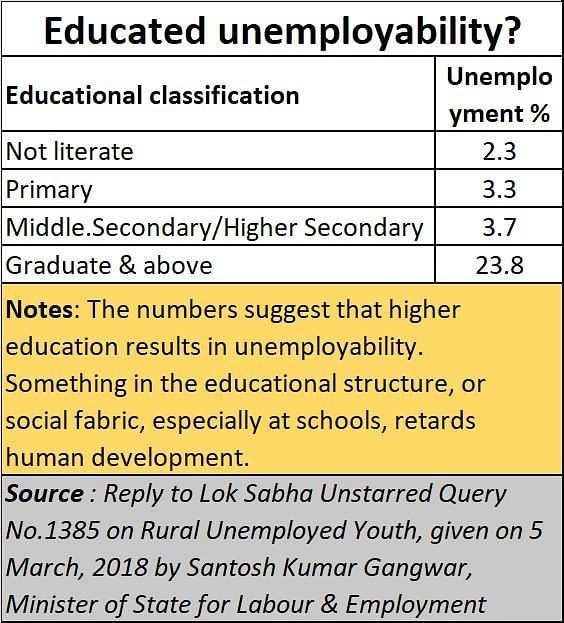 The malaise in school education has become a national problem. Even the central government’s allocations for education have kept on falling. This was highlighted in these columns in February this year but for obvious reasons, the warnings have gone unheeded.

Poor educational standards inevitably lead to unemployability, which is worse than unemployment. Rotten education makes people unemployable, even if there are jobs which need to be filled up by candidates who meet the requirements. Nothing shows this up better than the government’s own submissions before the Lok Sabha in March 2018. At higher education levels, it is more difficult for a person to find employment. But when a child is uneducated, that person has not been contaminated by rotten education. The candidate is more flexible and is willing to work harder. When a student becomes a graduate, he (or she) wants jobs appropriate for a graduate. But nobody wants them because they lack the required language and conceptual skills.

That is why this column is opposed to the army’s plans to introduce short-term three-year programmes for the unemployed. Three years is too short to instil the discipline a good soldier must have. Moreover, after three years, there will be no jobs waiting for such persons. Instead, the army will have weaponsised such unemployable persons with the ability to beat up other people and to participate in riots. These plans are highly toxic and must be nipped in the bud. India does not require more vigilantes who seek to use fists and sticks instead of reason. 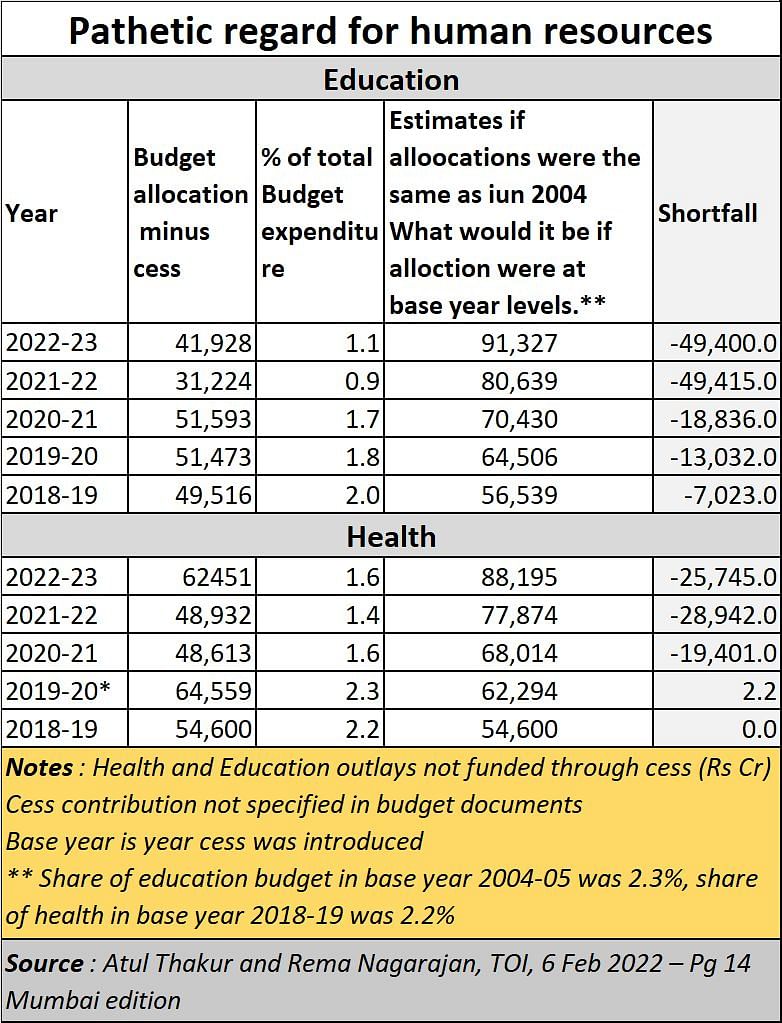 The situation is worsened when one discovers that the government has actually reduced expenditure on education as brought out by researchers Atul Thakur and Rema Nagarajan. When the state ignores education – especially school education which is a Constitutional obligation – you cannot expect the nation to be a leader in any business activity.

It is also true that the numbers may appear to favour India. But percentages tell a different story. So, a thousand unicorns may look impressive, but as a percentage of enterprises in India, they would be pathetically low.

That is why, when the World Health Organisation points to the vast number of people who have died in the recent pandemic – ten times larger than government estimates – the poor investments in healthcare would tend to support such findings. The government may rail and rant against such findings. But you cannot expect satisfactory results with poor investments, can you?

India has the potential. The current geopolitical alignments favour India. But unless the government gets all people to work together, you cannot have progress. Hate campaigns must stop. One reason why Bangladesh has been growing faster than India is that government publicly disapproves any communal strife or hate campaigns. which divide people. Penalties are harsh and meted out swiftly. That is why there are fewer riots in Bangladesh. More focus is paid on education and employability .

Can India do this? Yes, if there is political will, and sagacious planning. India needs to grow. The current inflationary pressures, and the surging numbers of the poor demand a better future for India’s children.

Think jobs, employability, and education (along with health). You could actually witness a resurgent India in a few years’ time. 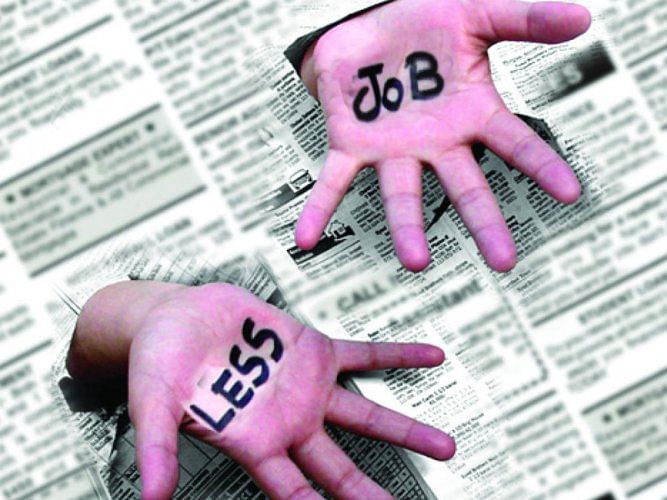