Policy watch: A sightless government isn’t even aware where gold is and in what forms

Indians love gold. And India ends up importing around 700-800 tonnes of gold on an average. Each tonne means a domestic market value of Rs.500 crore, and the imported gold would therefore mean an annual outgo of foreign exchange of at least Rs.350,000 crore. On an average around 100 tonnes of gold gets smuggled in. That could mean clandestine erosion of the value of the Indian rupee by Rs.50,000 crore. 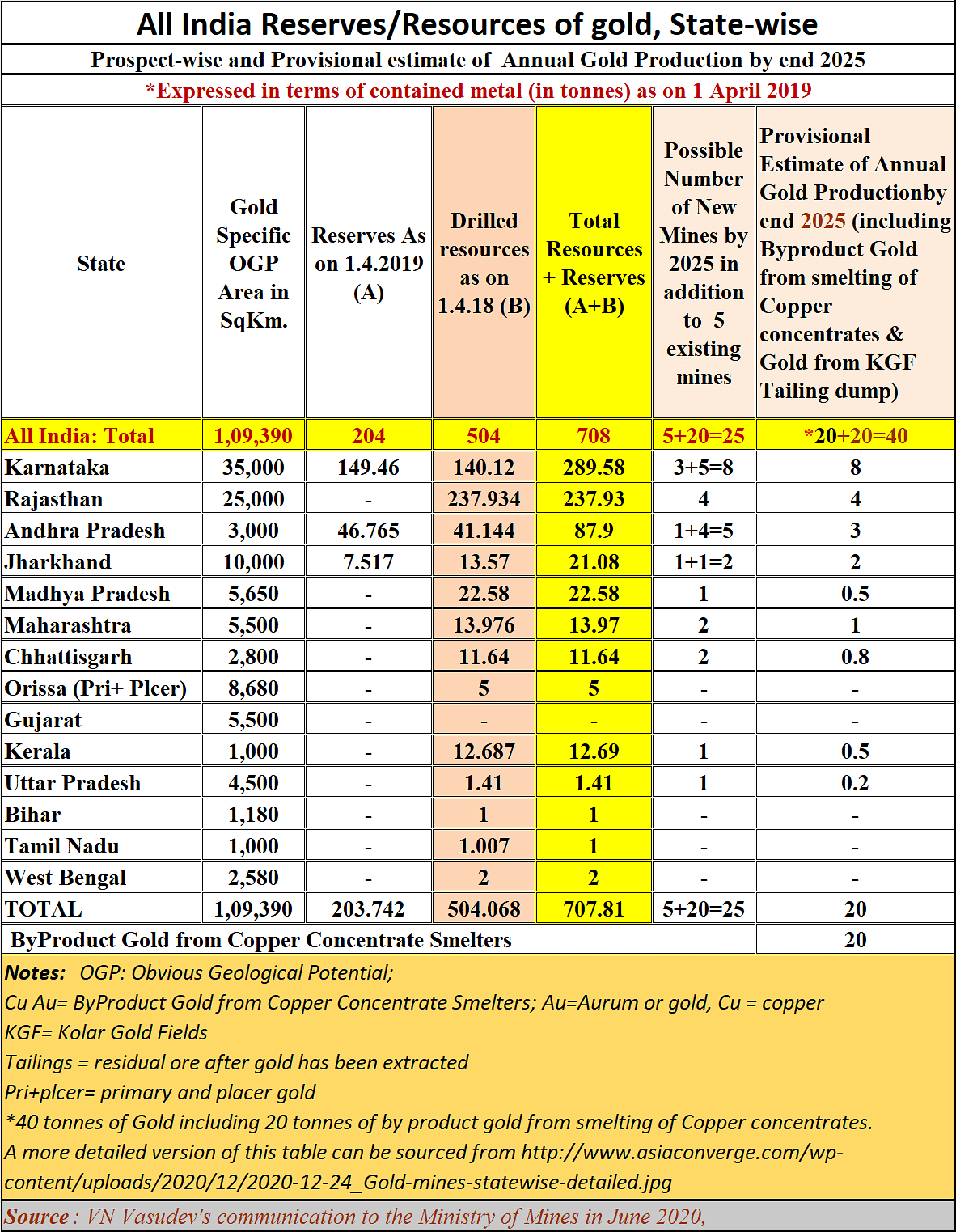 One way to mitigate both is by having more sensible gold import and export policies, thereby reducing smuggling and all related ills.

The second way would be to focus on gold mining.

Traditionally, most people believe that India has no more gold to mine. This is because, Indian gold mines (Kolar Gold Mines or KGF and Hutti gold mines, both government owned) seldom produced over 3.5 tonnes a year. KGF has officially closed (that will be another story in this series). But Hutti survives with an output of less than two tonnes annually.

But ask geologists, and they will tell you that India could produce ten times more gold year after year, if not more. Go to the website of the ministry of mines in India, and typical of all government mines especially during the pas six year, it offers scant information. But ask knowledgeable people, and they will tell you another story.

One such person is VN Vasudev, a geologist, who has specialized in Mineral Exploration and Mineral Policy matters.

He is a PhD in Economic Geology from the Indian Institute of Science, Bangalore, and a director with Australian-Indian Resources Pvt. Ltd. Geomysore Service (India) Pvt. Ltd and the publicly listed Deccan Gold Mines Ltd as well. 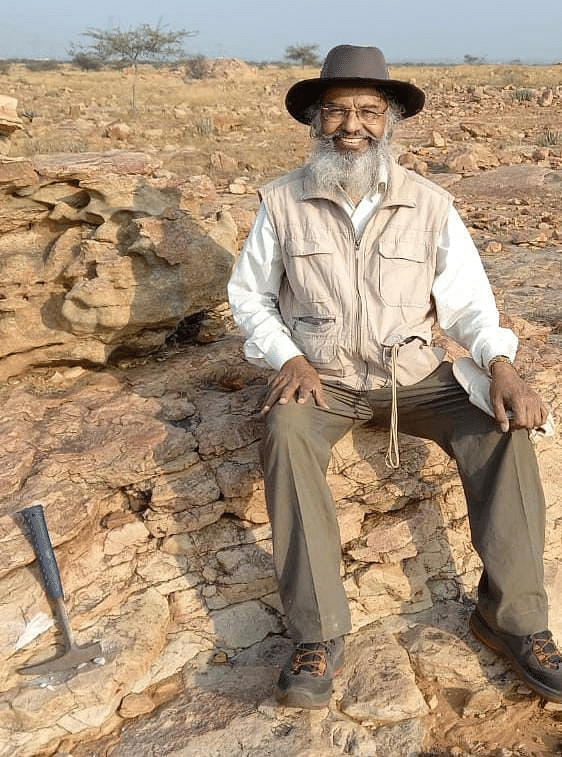 He was responsible for the discovery of the Ganajur gold deposits, the Mangalgatti and Bhavihal gold deposits, all in Karnataka, and the Jonnagiri Gold fields in Andhra Pradesh. Together, these deposits contain 900,000 troy ounces (27,993.129 kg) of gold.

His association with government bodies is equally significant. He was at various times,

The reason why his accomplishments are of significance is because of his willingness to talk about the actual state of gold deposits and mines in India. This is something that the government ought to have done on its website. But there is little of such information. On the contrary, ever since 2017, there has been an increased tendency on the part of all government websites to give out as little information as is possible.

The first ray of hope is visible when one goes through the letter Vasudev wrote to the Prime Minister of India in January this year. In that letter he pointed out the various places where gold was available (see chart). 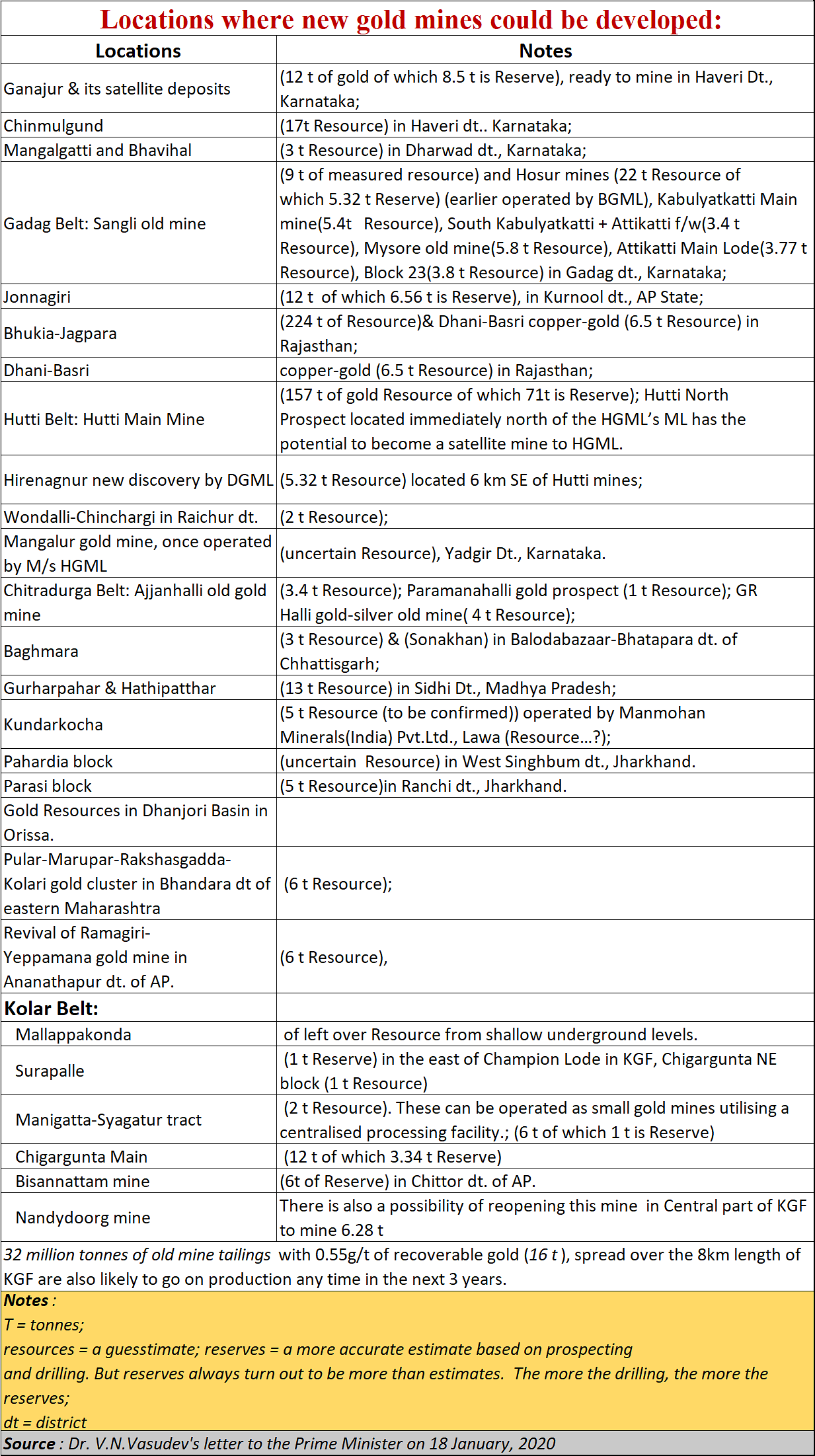 According to his prospect-wise compilation up to 1st April 2019, the Resource-base is 708 tonnes of gold. Even if 100 tonnes of this gold get mined each year, it would put this country on the global map of gold producers. Today, it just doesn’t matter to the world if it is a gold producer (see chart). 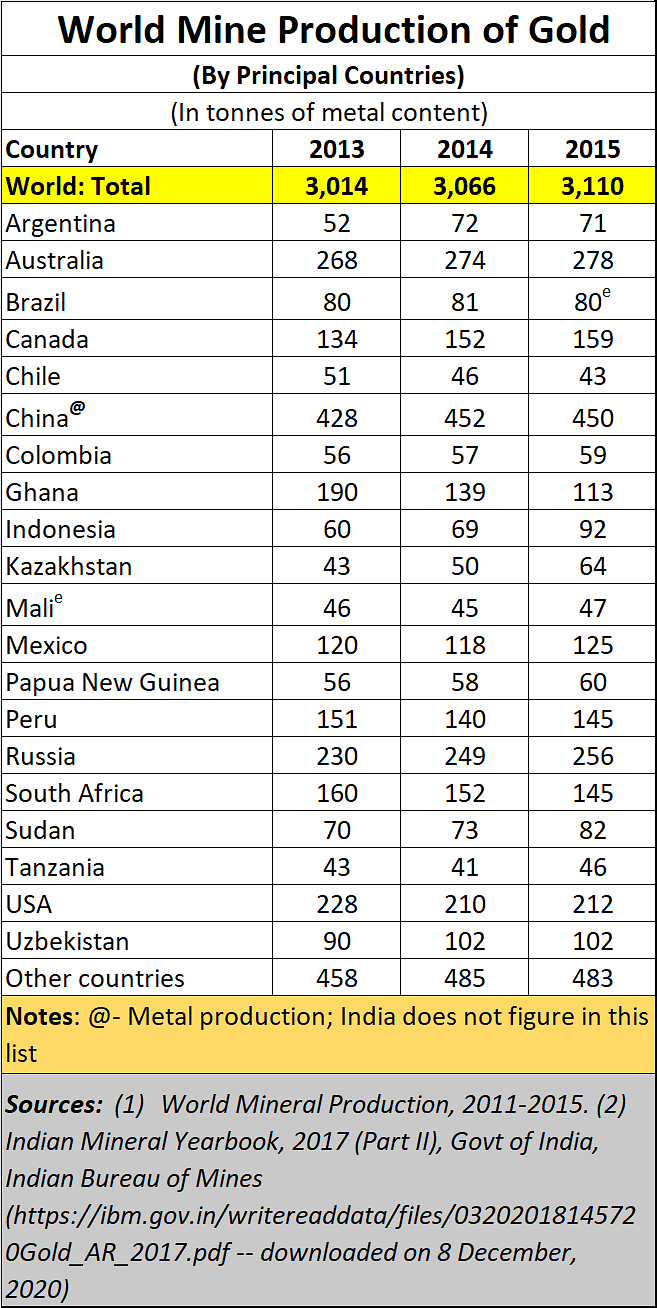 Second, as geologists point out, reserves are based on resources, which, in turn, are based on primary drilling and examination of the soil composition of the earth. And the second thing they point out is that as you drill more, the resources begin to swell up as more layers or pipes of gold begin to become visible. This is in addition to the gold that can be got from copper deposits. This is because gold and copper usually coexist.

This is where another note by Vasudev to the ministry of mines this June becomes even more relevant. It talks about the states in which gold can be found.

This chart is interesting because of several reasons.

First, it tells you that gold is not always found in large deposits, which in turn, require the building of large mines.

As Emperor Ashoka found out, and as many farmers working on farms near gold sites have also discovered, much of the gold is near the surface in exceedingly small quantities. But collectively, these sites can generate enough gold for India to make it a big mining country. The 708 tonnes already identified could easily swell into a lot more.

But India faces a big hurdle on two fronts.

First, it is confronted by a government which is unwilling to listen. It believes that only those who belong to a small coterie surrounding the prime minister enjoys all the information to feed to the prime minister. Nor is the prime minister willing to sit with groups of people as often as he used to when he was the chief minister of Gujarat. This observation comes not just from India journalists but also from Lionel Barber, the editor-in-chief of Financial Times.

Second, its mining policies are made by a bunch of bureaucrats who appear to live in colonial times, rooting for policies only an imperialist government imposed on a subjugated territory (but more on this later). Suffice it is to say that one common mining policy cannot work for gold. You cannot have a policy for locations that yield less than 0.5 tonnes of gold, and those that could yield more than 2 tonnes. Moreover, you cannot have a policy that appears to favour mines that destroy the terrain and the ecology and ignore methods that take both into account.

This is India’s tragedy. Caught between a government that does not listen and a bureaucracy that is wondrously adept at misleading politicians, it is damned to remain an importer of gold. It is destined to remain a country which promotes gold smuggling on the one hand, and gold theft on the other (but more on this later).

Can India be redeemed? 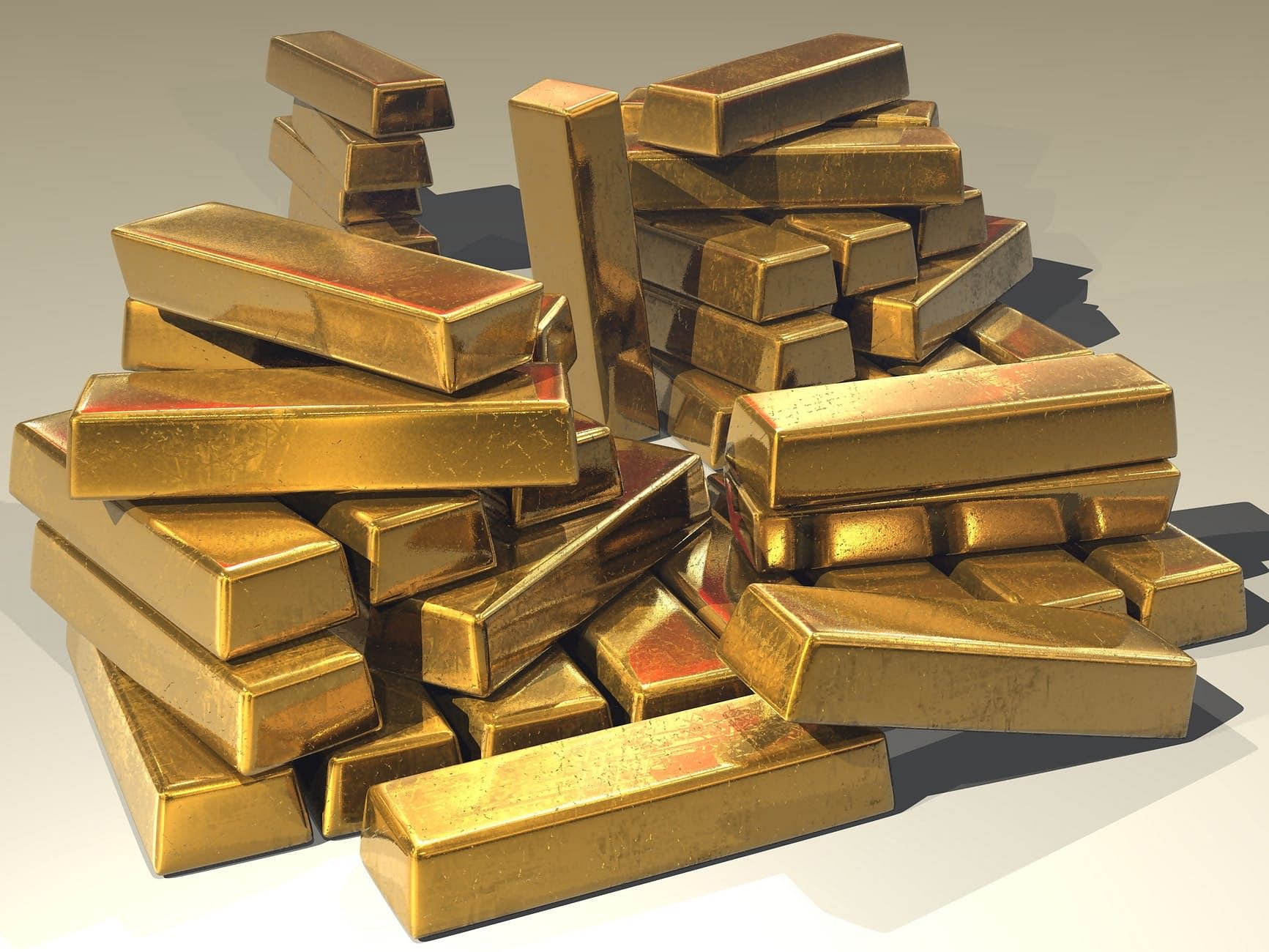 HomeAnalysisPolicy watch: A sightless government isn’t even aware where gold is and in what forms