No country for women: The veil comes down again in Afghanistan, as the Taliban take over, writes Deepa Gahlot

The first image that came out of the country was one of men painting over the faces of women on ad displays—as disturbing a symbol as any, of the obliteration of women’s rights under a repressive Taliban regime after twenty years of relative peace and progress
Deepa Gahlot 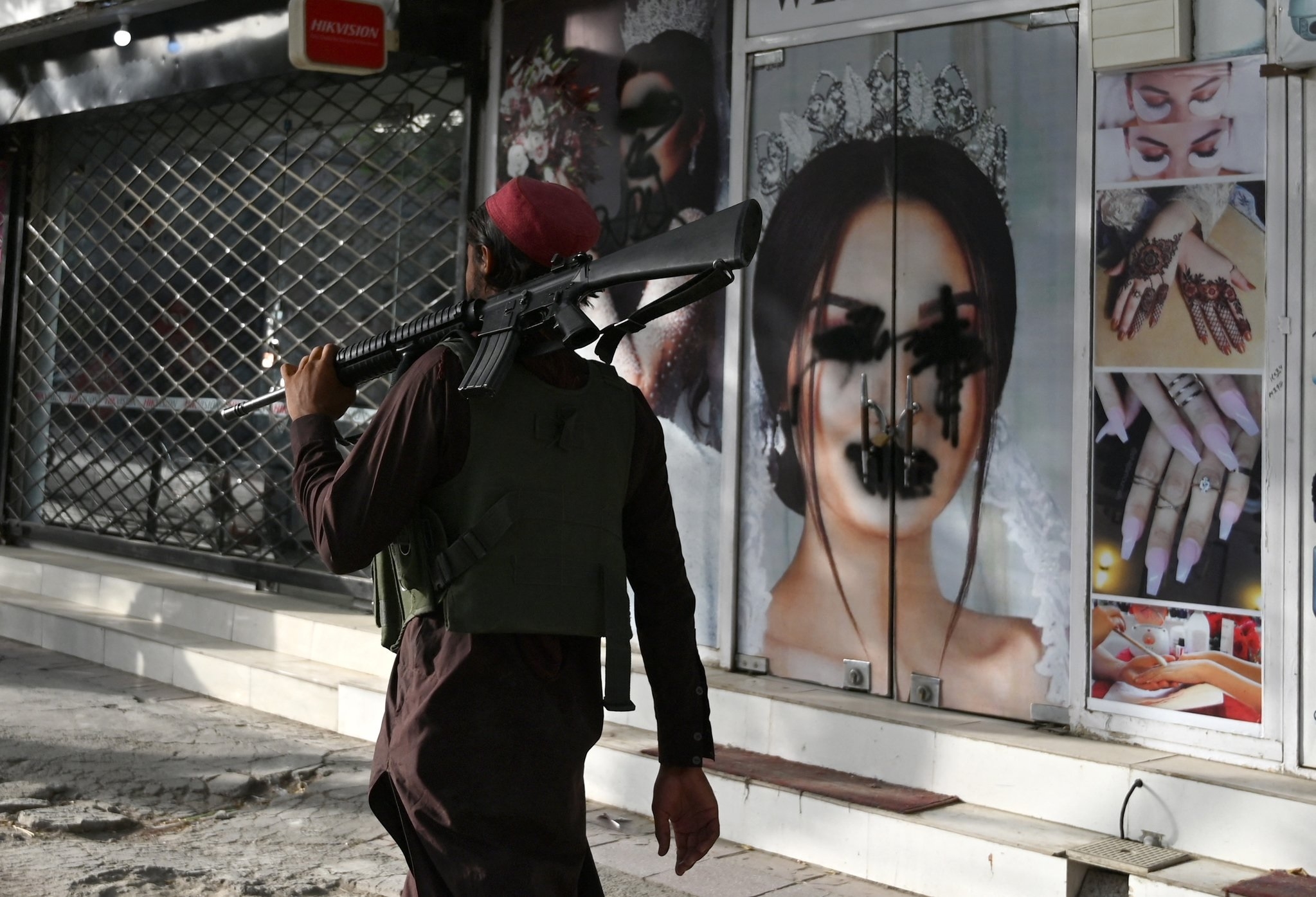 The world is watching in horror as the Taliban take over Afghanistan once again -- the deaths, the exodus and worst of all, the tragic fact that women will be pushed back into the dark ages. Under the ultra-conservative rule of the Taliban, women cannot get an education, cannot work or even leave their homes without being accompanied by a male relative. Punishments for flouting arbitrary and draconian laws are barbaric, the worst is being half buried in mud and stoned to death.

The first image that came out of the country was one of men painting over the faces of women on ad displays—as disturbing a symbol as any, of the obliteration of women’s rights under a repressive Taliban regime after twenty years of relative peace and progress.

Over the last few years, there has been a steady stream of books coming out about the ordeal women went through under the Taliban, even if they are written by women (and some men) who have been able to escape the country. (Afghanistan was reported to be the worst country in the world for women by the Thomson Reuters Foundation). Women from progressive societies cannot even imagine the condition of women left vulnerable to exploitation by brothers, uncles, cousins and in many cases, even fathers.

No women in ‘peace deal’

Nadia Hashimi, whose debut novel The Pearl That Broke Its Shell (2015) makes for a disturbing read, wrote in electricliterature.com, “Earlier in 2020, a U.S. envoy signed a “peace” deal with the Taliban to formalize the withdrawal of all American troops from Afghanistan. Although the liberation of Afghan women from their brutal and misogynistic regime had become a cause celebre and helped justify American military involvement, the four-page treaty did not once mention women."

Hashimi is an American of Afghan origin—her parents emigrated to the US before she was born. Still, she wrote a book about her country’s unfortunate women, in a simple, direct style.

There are two stories set a century apart, but linked by their spirit of misery as well as hope. Rahima is one of five daughters, which is a curse in her country, since women have no rights. Rahima’s father is a useless junkie, who works for a powerful warlord.

When things get unbearable, Rahima’s mother resorts to the Afghan custom of bacha posh—or dressing a pre-adolescent girl as a boy. This enables Rahima to go to school, run errands for her family and also work for a living, something her mother and sisters cannot do. The strange thing about bacha posh is that everyone knows about it, but pretends that the girl is a boy. But what happens when it’s time for her to revert to being a female?

Rahima and her sisters’ link to the outside world is their hunch-backed aunt, Shaima, whose birth defect has made her unmarriageable, but has also given her a limited freedom to move around. She tells Rahima and her sisters the story of their great grandmother Shekiba, who tried to make a life for herself as a boy, when she lost her entire family in an epidemic. She was burnt as a child and has a horribly disfigured face that condemned her to a single life.

Shekiba is, however, caught by her greedy relatives, who enslave her and then pass her on to others as a slave, till, by a quirk of fate, she is sent to the emperor’s palace in Kabul. There, she joins a posse of women dressed as men, hired to guard King Habibullah’s harem, because the king doesn’t trust men to do the job.

Both try to hold on to their freedom, but are forced into terrible marriages. Their limited liberty in disguise as men, gives them an insight into the lives of women in their country. Trapped at home with men who can marry multiple times, existence inside the cloistered women’s quarters is fraught with dangers of a different kind, as women fight for extra scraps of attention from their men. What gives them a modicum of respect is the bearing of sons.

The trait of women treating women as their enemy arises from a situation like this, where men hold complete power over women. The atrocities a woman endures as a young wife do not teach her to sympathise with others like her, but makes a mother-in-law mistreat her daughters-in-law; a sister-in-law or ‘co-wife’ to try to make life miserable for a newcomer into the zenana.

Hashimi continues to write about her native country in her books after this. Khaled Hosseini, perhaps the best-known writer of Afghan origin after the bestselling The Kite Runner, wrote of the travails of women in A Thousand Splendid Suns.

Around the same time as Hashimi’s first novel, Ukmina Mansoori’s memoir, I Am a Bacha Posh: My Life as a Woman Living as a Man in Afghanistan, was published. Like other girls forced to return to their female selves, Ukmina pushed back against family and social pressure, and decided to stay in men’s garb, which allowed her to choose her destiny as a man.

Investigative journalist Jenny Nordberg wrote a non-fiction book, The Underground Girls of Kabul: In Search of a Hidden Resistance in Afghanistan, after doing an expose of the bacha posh practice in the New York Times. She described desperate mothers forced to turn their daughters into boys, the trauma of girls given a glimpse of freedom, which is cruelly snatched away when they reach puberty. Some of them resist the forced return to the oppressive reality of womanhood.

Even earlier, Deborah Ellis’s book titled, The Breadwinner (2001) came out, about Parvana, an 11-year-old girl, who has to disguise herself as a boy to provide for her family of six, when her disabled father is imprisoned by the Taliban. (In 2017 the story was turned into an animated film, by Nora Twomey, and was nominated for an Academy Award in the category of Best Animated Feature Film.)

There is resistance, of course, in small ways—women running secret schools, libraries and sewing groups that help women stay in touch with and support one another. Celebrated author Jeanette Winterson wrote Nasreen’s Secret School, about an orphaned girl enrolled in an underground school at great risk by her grandmother.

Deborah Rodriguez wrote two books, The Little Coffee Shop of Kabul and The Kabul Beauty School, about how women find ways to connect. Gayle Tzemach Lemmon’s The Dressmaker of Khair Khana is an inspiring account of Kamila Sidiqi, a young woman with no means of earning a living after the Taliban captured Kabul in 1995, started a dressmaking business that provided work for her sisters and neighbourhood women, and kept it going in spite of threats and attacks.

Dear Zari: Hidden Stories from Women of Afghanistan, by Zarguna Kargar, tells the stories of 13 Afghan women in their own words. And it is heartrending to read about the atrocities women have to suffer, forced marriages (often to old men), being treated as ‘payment’ to settle a feud, hardships faced by widows. Rosemarie Skaine’s The Women of Afghanistan Under the Taliban paints an equally grim picture.

More such books about oppression and resilience have been published not just about Afghanistan but also Iran, Iraq and Syria.

The real tragedy of a society sliding back into religious orthodoxy, is that children believe this is what life is supposed to be like; most girls grow up to be docile, and boys grow up to be entitled and invariably cruel. It is difficult and dangerous for girls to escape, unless they have unusually enlightened fathers and brothers.

In developed societies, women take their independence for granted. But wherever there is a rise of conservatives, the lives of women can be destroyed in the blink of an eye.