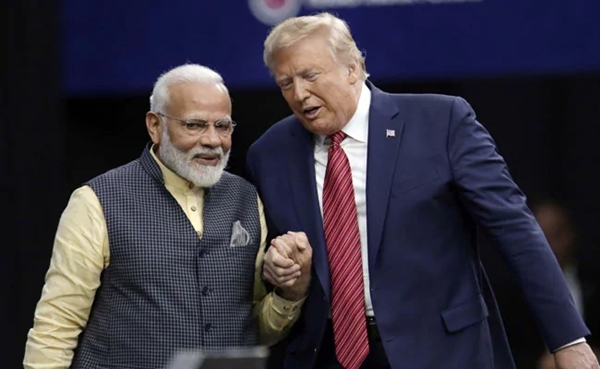 They are the two largest democracies in the world, separated by ten thousand miles. America’s war of independence two and half centuries ago, began with a tax revolt, and dumping of tea in the Boston harbour. That tea was from India, another colonised nation then. One of India’s most influential philosopher-saint burst upon the world stage because of a thunderous speech in Chicago in 1893. That was Swami Vivekananda. America’s foremost leader of the civil rights movement in the last century, Martin Luther King was influenced by Mahatma Gandhi. More recently it was the United States, which broke ranks with world powers, and unilaterally pulled India out of a three-decade old nuclear apartheid, by signing the historic civil nuclear deal in 2005. Together these two countries are among the top three economies of the world measured by purchasing power parity. A western nation which comes closest to the incredible social, cultural and racial diversity of India, is the United States. Thus, whatever the pundits and politicians may say, the two countries have linked destinies, even if improbable.

In more mundane terms, the U.S. is important to India because it is one of the very few nations with which India enjoys a significant trade surplus (around 25 billion dollars). The two-way trade in goods and services is close to 150 billion dollars, and can easily double in the coming years. The inbound foreign domestic investment from America is about 50 billion dollars, but the reverse FDI by India into the U.S. is also 10 billion and increasing. Indian Americans are a prominent, relatively affluent community who are playing an increasingly important role in government and local politics.

This background is worth recounting in the light of the impending visit of President Donald Trump in the next ten days. He is expected to visit Ahmedabad to inaugurate the Motera stadium, possibly one of the biggest in the world. He will also spend two days in Delhi interacting with policy makers, business delegations and politicians. His visit comes just a few months after Prime Minister Narendra Modi’s mega rally joined by President Trump, in a stadium in Texas. This clearly shows the bonhomie among the two leaders. In the post-world war era, seven out of the 13 presidents of the U.S. have come to India, and President Obama came twice, once as a Chief Guest at the official Republic Day function.

For Trump to come to India, just months before his presidential election in November is a big deal.  He currently enjoys the highest approval rating in his country, in the last three years. Just this past week he emerged victorious having been acquitted in a very fractious impeachment trial. He successfully seems to have browbeaten the Chinese to agree to a trade deal, which seeks to reduce the bilateral trade deficit. In fact, the signing of the phase-one trade deal with China, is a sort of truce in their spat. It has reduced the anxiety among global markets (although the Coronavirus is a new disruptive threat). President Trump has also concluded an ambitious and favourable three-way trade deal with Canada and Mexico. To top it all, the economy of the United States looks in very good shape, with the unemployment rate at the lowest level in possibly fifty years. There are so many jobs to be filled, that they are even recruiting convicted felons in some States! Of course, the quality of the new jobs is a separate and debatable topic. And the stock market continues to scale new heights. All this is not to ignore the large fact, that President Trump has many fierce critics both domestically and abroad, and the current political climate in the US is very polarised.

So, while President Trump comes in a triumphant mood, India is laying out the red carpet. It has indicated that it is ready to sign a mini free trade deal with the U.S, with whom India enjoys a precious trade surplus. India has already announced special concessions for the import of dairy products and other agricultural products, like almonds, walnuts, cotton and apples. It is ironic that India is willing to be liberal about dairy imports when that was one of the issues for withdrawing from RCEP. India is also willing to give more access for imports of poultry, especially chicken legs. In exchange India hopes for a restoration of the Generalised System of Preferences (GSP) benefits for tariff free access to American markets. The removal of GSP benefits for India has meant that it is now at a competitive disadvantage vis-à-vis exports from Bangladesh and Vietnam, in sectors like textiles and garments. Of course, India is also offering to import greater quantities of crude oil from the shale oil producers in the U.S. The bilateral trade surplus can easily be offset with large defence purchases, some of which are definitely going to be announced in the upcoming visit.

In the past two decades India has shown a tilt away from its erstwhile strict adherence to non-alignment, although it always had a special closeness to Russia. The signing of the Indo-US nuclear deal was historic, and expected to bring benefits to the nuclear industry in America, which so far it hasn’t. There are other contentious issues to sort out, most importantly the ties with Iran, Afghanistan and Russia. How can India maintain proximity and amicability with these three without earning the ire of the American administration? India is also an important player in the newly formed four-way alignment called the “quad”, between the two and Japan and Australia. This dialogue began more than a decade ago, and is a significant formation, which recognises India’s strategic role in the Indo-Pacific region.

Thus, despite India’s continuing and legitimate desire to maintain a non-aligned stance, and friendly relations with major powers in the world, including countries like China, i.e. a sort of “jagan-mitra” status, this objective does not get jeopardised by closer trade, commerce, investment and market ties with America. The U.S. is a rare “western” nation whose demography is young, whose politics is vibrant and solidly democratic, and which still remains welcoming to immigrants, despite all the current rhetoric, and stands firmly for economic and political freedom.