Hug Americans by all means, but don’t play into their hands 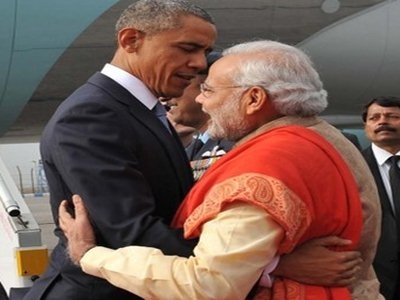 Mumbai : The American ‘strategic’ embrace has supplanted the Russian bear hug with both Narendra Modi and Barack Obama agreeing to jointly undertake military hardware production. Not just that, the frequency of the military games will go up; both countries will move in tandem in South China Sea; share a common goal of reconstruction in Afghanistan; and the contours of future defence ties will take shape within an institutionalised military template.

As one delves deeper into the synergy, it is obvious that a military-industry infrastructure will take at least a decade to fructify; also with the fine print of the agreement not yet out, there is no clarity as to whether it will indeed result in transfer of sensitive technology? Or would it be a mere facade for minimalist Indian involvement in design and development, as was the case when we were sleeping with the Russians?

Whatever the underpinnings, PM Modi needs to keep in mind that a security hug can often become a stifling arm lock. So, hug Barack Obama by all means, and hug him at the drop of the hat, if you fancy, but don’t cling onto him, especially in matters of defence supplies, because one kind of excessive dependence is as bad as the other.

The important thing then is to reduce our overwhelming dependence on both Russian and American defence imports and indigenise production to the extent possible. Wherever imports are inevitable, the mantra should be to fan out,  diversify and buy hardware from other nations in the arms bazaar.

It has been reported that most of the defence hardware on display during the R-Day pageantry was of Russian make. Obama, as he sat merrily chewing gum at Modi’s side, must have been amused at the thought that a couple of R-Days down the line, most of the exhibits on display would be of American make. In this context, a defence expert was rightly heard reasoning on national TV that India has the green bucks to manufacture locally the Martian spacecraft, Mangalyaan, but is not able to make within the country the butt of a sophisticated military rifle.

There are lessons that one can draw from a security hug: one embrace is as good or bad as the other if we can’t disengage at the time of our choosing. Also, hugs are contagious: one apparent fallout of our increasing proximity to the U.S., especially in the last decade, is that Russia is now selling its military hardware to Pakistan. So, hobnobbing with the U.S. on such a grand scale will change the dynamics of our relationship with others in the region and the agenda for the future.

Making wars and weapons is a kind of US hobby: nearly half of the top 100 armament companies in the world are American, which sell arms worth billions every year. These companies, in turn, have a vested interest in perpetuating a regime of war and strife in global flash points.  So, hug the Americans by all means but don’t play into their hands.