From opposing Chhath Puja to embracing it, the Shiv Sena and Mumbai have come a long way, writes Smruti Koppikar

For reasons of political expediency or otherwise, Chhath Puja and Durga Pujo have become intrinsic to Mumbai’s socio-cultural calendar – just as Ganeshotsav, Navratri, Pongal and Eid did through its history
Smruti Koppikar 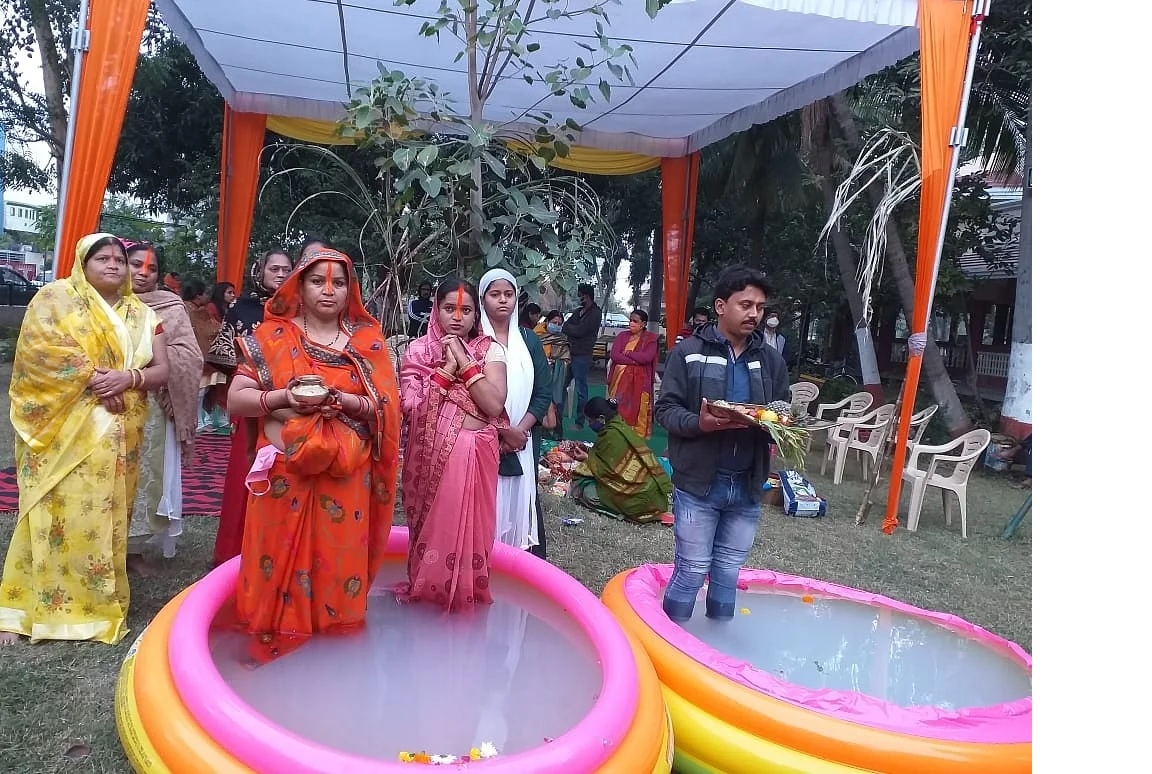 This year, as last year, beaches and waterfronts of Mumbai were closed to devotees who perform the annual Chhath Puja which falls a few days after Diwali. The emphasis was on discouraging large crowds during the celebration to limit the spread of Covid-19. Instead, the Brihanmumbai Municipal Corporation constructed, or encouraged local construction of, artificial ponds across the city’s wards at its cost and on its responsibility for smaller congregations of devotees.

The BMC’s circular, closing beaches and suggesting that private organisers construct and pay for artificial ponds, was opposed by both the Congress and BJP’s local leaders. They demanded that Shiv Sena working president and Maharashtra chief minister Uddhav Thackeray intervene in a way that the BMC would enable devotees to perform rituals associated with Chhath Puja just as it facilitates immersion of Ganesha idols during the Ganeshotsav which has long been identified as Mumbai’s festival. The Shiv Sena-led BMC fell in line.

Story of a decade ago

This would have been improbable about a decade ago. Then, the Shiv Sena and its cousin, the Maharashtra Navnirman Sena, were belligerently opposed to public festivity of Chhath Puja, forget enabling it. Their politics was stoked by their hostility to ‘Uttar Bharatiyas’ or migrants from Bihar, Jharkhand and eastern Uttar Pradesh who primarily celebrate the festival. MNS leader Raj Thackeray softened his stance about three years ago. The Shiv Sena stopped making an issue of the ‘migrant outsider’ when its new leadership accepted that communities other than Maharashtrians have an equally deep bond with and claim over the city.

It’s all political gimmickry, some would say. The changing stance is part gimmickry but it is also a reflection of changing realpolitik and cultural transformation. There’s little room for any political party that speaks the native-outsider language in Mumbai to be accepted and find voters. Mumbai was historically built by migrants of all communities and classes which many later embraced as their home.

There are millions of second and third-generation Mumbaikars whose families hail from Tamil Nadu, Karnataka, Andhra Pradesh, Kerala, Uttar Pradesh, Bihar, Jharkhand, Uttarakhand, not to speak of Gujarat, Rajasthan and Punjab. Many speak fluent Marathi and have embraced the Ganeshotsav as their own, many support the IPL franchise Mumbai Indians over, say Chennai Super Kings or Royal Challengers Bangalore. They are of Mumbai as much as Mumbai is in them.

Uttar Bharatiyas comprise 25 per cent to 28 per cent of Mumbai’s population, data shows. One in every four or five voters has Uttar Bharatiya roots. A political party, even one with parochialism in its ideology, cannot hope to win elections by alienating such large sections of the electorate. The Shiv Sena, in its early years, was against migrants from south India; as Hindutva became electoral currency, its ideological opposition shifted to Muslims, then it trained guns on migrants from north India.

However, the party’s second generation saw the writing on the wall. Back in 2003, Uddhav Thackeray launched the ‘Mee Mumbaikar’ campaign as an inclusive gesture towards north Indians. He drew vociferous criticism from within his party. It took years before the leadership realised that the party must at least accept, if not embrace, migrants from north India if it had to carry political heft in Mumbai. The MNS, unfortunately, did not learn the lesson and preferred to repeat the trajectory from opposing to grudgingly accepting Uttar Bharatiyas.

For years, the Congress spoke for north Indian migrants and their second-third generations, its leaders supporting festivals such as the Chhath Puja. Former MP Sanjay Nirupam, who migrated from the Shiv Sena to the Congress, upped the profile of Chhath Puja by organising mega celebrations at Juhu beach and inviting A-listers such as Amitabh Bachchan to grace the occasion. The Hindu Uttar Bharatiya communities in Mumbai moved on from the Congress to the BJP in recent years as Hindutva ideology swept aside all else and the Hindu identity was politically massaged in Uttar Pradesh.

With election to the BMC on the anvil, political parties are out to woo voters with whatever goodies work. For many Uttar Bharatiyas, public celebration of Chhath Puja is an important affirmation of their identity in Mumbai. Parties which support them and enable the celebration are likely to earn brownie points. After all, their vote can be the deciding factor in as many as 15-16 of the city’s 36 assembly constituencies.

For anthropologists or cultural studies explorers, the transformation from no-Chhath-Puja to welcome-to-Chhath-Puja in Mumbai’s dominant political discourse, or the similar increasing presence of Durga Pujo pandals during Navratri, presents an interesting case study of how a large cohort of people with economic clout or social power can influence a mega city’s socio-cultural fabric despite facing initial opposition. With the BMC itself constructing artificial ponds for Chhath Puja, the migrants and their cultural references are now firmly rooted in the city’s soil.

Mumbai’s western suburbs and parts of eastern suburbs have concentrations of Uttar Bharatiya communities in pockets that can be playfully called mini-Bihar or mini-UP, there are sections of slums that go by names such as Bihari Basti.

From vegetable and fruits vending to milk distribution and taxi-rickshaws, and multiple informal sector services that keep the city running, Uttar Bharatiya communities have dominant footprints across the city’s informal economy. Restaurants that serve only south Indian fare, including upscale ones, now have first-generation migrants from northern states or north-eastern states for whom Bambaiya Hindi is as much a new language as any other and idli-dosa is foreign as vada-pav.

This is the urban society or city culture where urban centres which expand organically develop their unique and identifiable systems of social norms, practices and relationships. These, in turn, represent and facilitate innovation and economic growth, creating opportunities for employment and newer forms of commerce. It’s not an accident that cities are sites of cultural and creative industries, from small-scale to mega corporations. When a substantial number of residents in a city consider a way of life or a celebration as valuable, and others embrace or even accept it, a new layer of cultural practice encrusts its existing cultural mix.

For reasons of political expediency or otherwise, Chhath Puja and Durga Pujo have become intrinsic to Mumbai’s socio-cultural calendar – just as Ganeshotsav, Navratri, Pongal and Eid did through its history. The more, the merrier for its cultural fabric. Do celebrations have to be noisy? That's another story.

Smruti Koppikar is a senior journalist, urban chronicler and media educator. She writes on politics, cities, gender and development, and tweets @smrutibombay