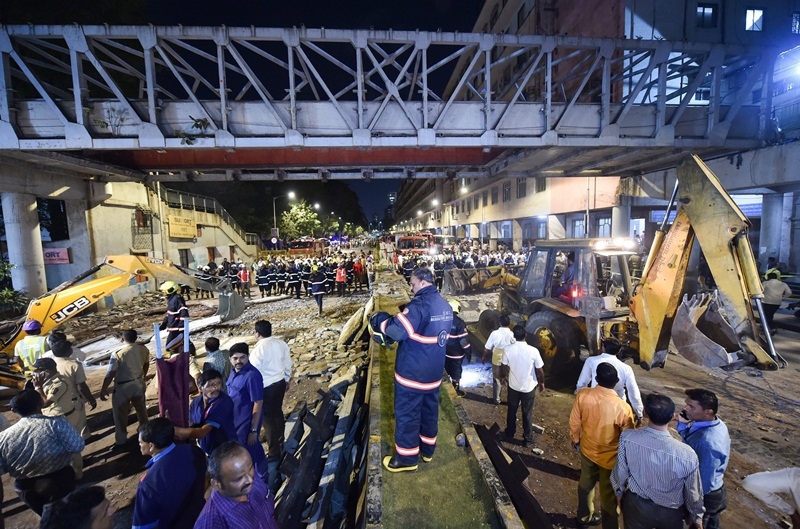 Mumbai a city of dreams. People all across the country flock here to fulfil their ambitions. It is a city that never sleeps. Due to its vastness, people measure the length and breadth of the western, central and harbour lines day in and day out. Local trains are almost always overcrowded, with no difference between first class and general coaches during peak hours.

Since the city never stops, with the amount of work pressure one cannot afford an accident. When everyone is doing their job, they expect some amount of security and support from the authorities and the government to function smoothly.

Walking down just a 39-year-old foot-over-bridge at CSMT, the pedestrians had put their faith in the good governance that shook their lives forever. Six people died in the bridge collapse with several left injured. Who is the culprit? Could that accident have been avoided? What went wrong? There is no one with any answers to these questions.

But there are many theories. The blame game has begun. The first finger is pointed out at the government. What was the Fadnavis government doing since almost a year when the last foot-over-bridge collapsed? All the FOBs across the city should have been repaired in time, but they needed several permissions. Human lives can be lost, but the paperwork cannot be sped up. The officers who sit in those lucrative chairs do not have any answer themselves.

Milind Deora from the Congress commented that he wants answers from the current government. When the bridge was made in 1980, the Centre had the government of Indira Gandhi. In Maharashtra, for first half of 1980 was the President’s rule and for the later half A R Antulay from Indira Gandhi’s party was the chief minister.

They can also be held responsible for an accident 39 years later as the raw material used and the engineering of the bridge might have had loopholes. They may have let weak bridge be built. The construction during British era is still strong and watch-worthy.

A team needs a bunch of people. They can be of varied mindsets. Which political party they vote for doesn’t matter. The work that they are supposed to do, their honesty, integrity and values matter. If everyone involved in building that bridge valued their work, the accident may have been avoided. Devendra Fadnavis rightly questioned the audit report sighting that the report expected “minor repairs”, which was not the case.

BMC, railways and Maharashtra government — they are being held as culprits of the collapse. If we have to point out, a single person or a name cannot be found guilty. It is the negligence of the authorities that led to the accident. The attitude that takes human lives for granted, that doesn’t allow people to work for others, to put others’ welfare first, is responsible.

Their mindset is more rusty than the iron rods from the bridge. There are tons of files in these offices waiting for their turn as today’s work is put on tomorrow, the tomorrow that rarely comes.  A common man is supposed to pay the tax, that’s it. He works hard and holds back his ambitions just in order to serve the country. All he expects is some form of safety when he buys a ticket for the local train.

The wind in this country blows in a direction where human lives are nullified. We are treated as subjects by the authorities. We make the government, why not the government make our lives in turn? This question has made us a dissatisfied lot of citizens. Collapsing buildings, rapes, agrarian anger, attacks on the border — our reaction to it makes us what we are. We as well as the government should ask ourselves, how much we value human lives.

If we want to be a developed nation, we have to develop our mentality. We are a breed of people who are taught to work for money, for the sake of working. We need to learn that job satisfaction comes with working for others happiness, by walking an extra mile and not just the money.

This incident exemplifies how a mistake can turn into a blunder. Anyone who is held responsible must not have intended this to happen. Then what did he intend of? He wanted to satisfy his greed. The anger towards the system, the pride for power, the authority to manipulate ways and the avarice to gain immediate benefits — these four formidable flaws could have played their part in making the deadly incident happen.

The only way out is to weed out the greed from oneself. All the comments flowing in by the authorities stink of the same old submission to the mortal sins. If the bridge was built keeping this in mind, the accident could have been avoided. The government can only turn the tables here by setting an example and making things right.

Pragya Jain is an educationist. Views are personal.