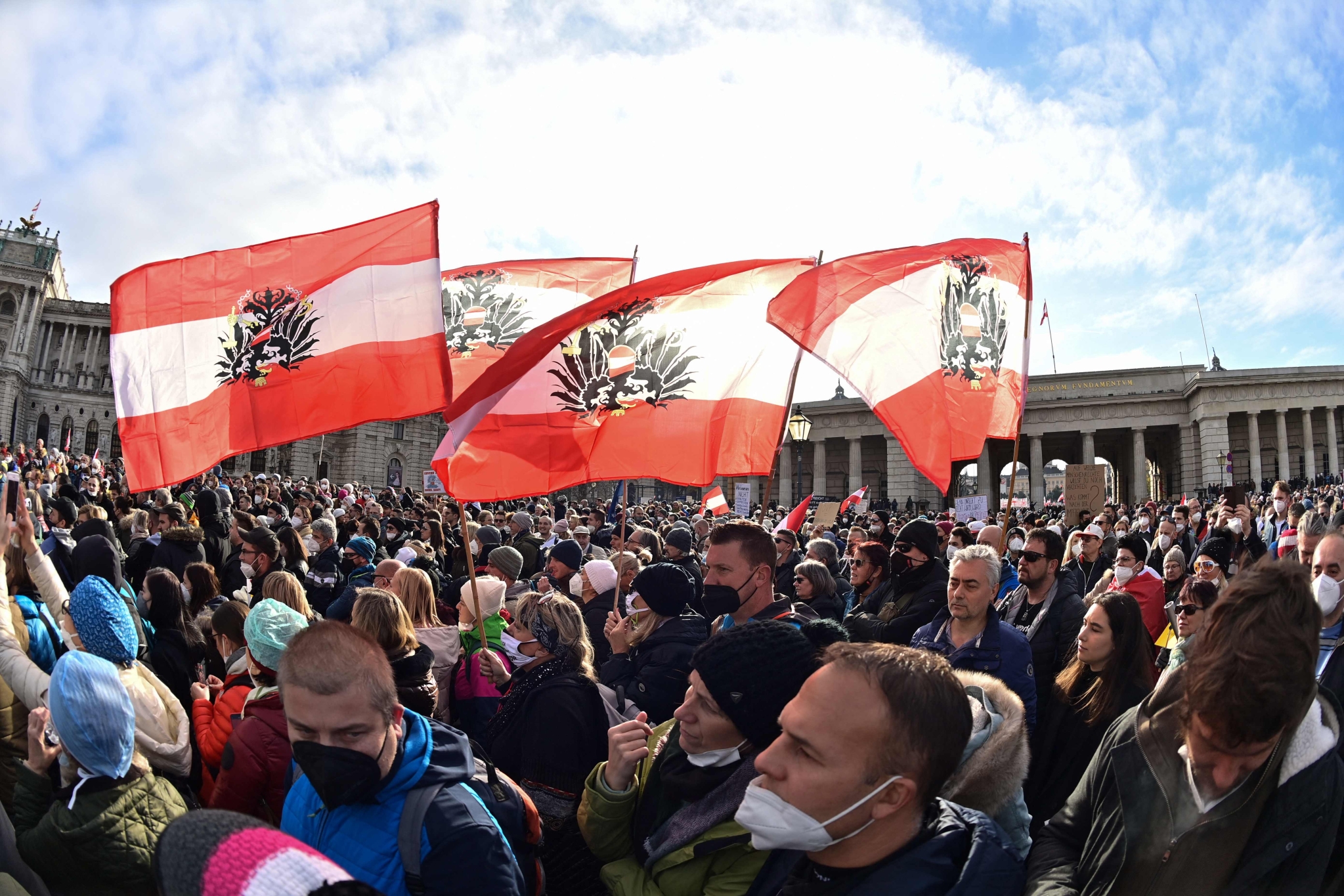 Demonstrators wave Austrian flags during a rally held by Austrias far-right Freedom Party FPOe against the measures taken to curb the coronavirus (Covid-19) pandemic, at Heldenplatz square in front of the Hofburg Palace in Vienna, Austria on November 20, 2021 |

MUNICH: Europe descended into a third day of violent chaos on Sunday as tens of thousands of people in Belgium took to the streets to protest against the return of strict lockdown rules aimed at curbing a rise in Covid infections. Nearly 40,000 people descended on the capital Brussels to protest against the new measures banning the un-vaccinated from entering restaurants and bars.

The protests descended into chaos, with some of the protesters seen setting fires on the streets while others threw rocks through the windows of local businesses. Two police cars were also damaged. The protest march had lined up behind a huge banner saying “Together for Freedom."

Over the past several days, there have been marches in many European nations as one government after another has tightened measures, barring England.

The violence erupted even as Germany took a cue from Austria and decided to make vaccinations compulsory for all, with ministers saying that the move is 'unavoidable' amid a fourth wave of the pandemic which is crippling the country's hospitals.

The number of Covid cases are spurting daily, with the country reporting 48,201 infections on Saturday - the highest number since the beginning of the pandemic.

The fourth wave has swamped hospitals, with health chiefs warning that the situation is 'extremely critical.'

With that, Europe has become the nerve centre of the pandemic once again; the World Health Organisation has every reason to be worried as the Continent is the only region in the world where Covid-related fatalities spiked by five per cent just this week.

In France, fifth-wave coronavirus infections are rising at an alarming rate, the government reported on Sunday, with new daily cases close to doubling over the past week.

Two soccer matches in the country's top professional league were briefly halted when fans — banned from matches under a partial lockdown in force in the Netherlands for a week — broke into stadiums in the towns of Alkmaar and Almelo.

All this is impacting the Christmas revelry. In Bavaria, the 'dramatic' coronavirus resurgence prompted the Bavarian state capital of Munich to become the first major German city to cancel its Christmas market, which usually draws some three million visitors. – Input AP and other agencies.