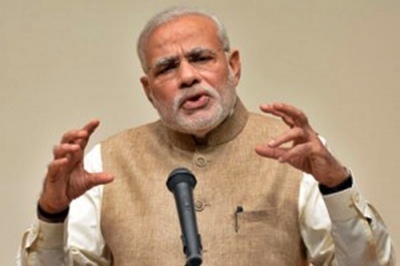 San Jose : Prime Minister Narendra Modi today pointed out that the United Nations took fifteen years to define the term ‘terrorism’, adding that it must clarify as to who is with terrorists and who is with humanity to make the picture clear.

Addressing the Indian diaspora here at the SAP Center in California, the Indian Prime Minister said that terrorism is one of the pressing issues that the world is facing, pointing out that it will take time to fight terrorism as the United Nations is taking fifteen years to define it. Terrorism and global warming are two pressing issues the world faces. We need to mitigate these two menaces. If there is faith in humanity, we can defeat both of them,” said Prime Minister Modi.

“United Nation still hasn’t been able to define terrorism, if it will take so much time to define the same, how will we tackle it. It has taken 15 years to define terrorism, how long will it take to fight terrorism,” said Modi. “It is the responsibility of the United Nations, who is celebrating its 70th anniversary, to differentiate between terrorists and humanitarians and only then, we can make this world a peaceful planet. United Nations must clarify as to who is with terrorist and who stands with humanity. The picture must be made clear before the world,” he added. He asserted that there is nothing such as good terrorism or bad terrorism. “Terrorism is terrorism. We cannot save humanity with this concept of good terrorism,” said Prime Minister Modi.