Pakistan's Supreme Court will resume the hearing on Tuesday on the dismissal of a no-confidence vote against Prime Minister Imran Khan and the dissolution of Parliament by the President on the advice of the embattled premier, a day after adjourning the proceedings after promising to give a "reasonable order" in the high-profile case.

The apex court had taken a suo motu cognizance of the current political situation in the country.

President Arif Alvi had dissolved the National Assembly (NA) on the advice of Prime Minister Khan, minutes after Deputy Speaker Qasim Suri rejected a no-confidence motion against the premier, who had effectively lost the majority in the 342-member lower house of Parliament on Sunday.

Chief Justice Umar Ata Bandial said that all orders and actions initiated by the prime minister and the president regarding the dissolution of the National Assembly will be subject to the court's order.

President Alvi, the Supreme Court Bar Association and all political parties have been made respondents in the case.

Chief Justice of Pakistan (CJP) Umar Ata Bandial on Monday asked the petitioners to explain how, and convince the Supreme Court that the April 3 ruling by National Assembly Deputy Speaker Qasim Suri on the no-confidence resolution against the prime minister was illegal.

Justice Munib Akhtar observed that, under House rules, the deputy speaker went beyond his jurisdiction by issuing the ruling on the no-trust motion.

Concluding Monday’s proceedings, the CJP wondered why opposition members failed to attend the meeting of the parliamentary committee on national security, during which contents of the ‘threat letter’ were shared with parliamentarians.

Khan was widely regarded as having come to power with the help of Pakistan's army, but they have since fallen out, according to observers.

His political opponents then seized this opportunity to demand a no-confidence vote after persuading a number of his coalition partners to defect to them.

On Sunday, MPs meeting to hold the vote - which Mr Khan was expected to lose - were told of an "an operation for a regime change by a foreign government".

The deputy speaker chairing the session - a close ally of the prime minister - then proceeded to declare the vote unconstitutional.

The move has sparked anger among the opposition, with some politicians accusing Mr Khan of "treason" for not allowing the vote to go ahead.

But in a television address and a series of late night tweets Mr Khan defended the decision.

Mr Khan has said his criticism of US policy and other foreign policy decisions has led to an attempt by the US to remove him from power.

Opposition politicians have ridiculed the accusation, and the US has denied it.

"There is no truth to these allegations... we respect and support Pakistan's constitutional process and the rule of law," a State Department spokesperson told news outlet Reuters. 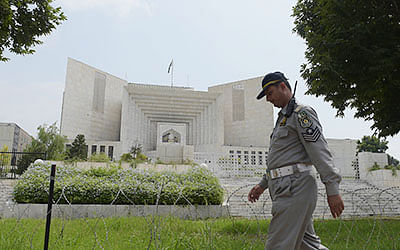