HomeWorldOn Camera: One-third of Pakistan is underwater due to floods, minister says

On Camera: One-third of Pakistan is underwater due to floods, minister says

Nearly a half million people crowded into camps after losing their homes in widespread flooding and the climate minister warned Monday that Pakistan is on the “front line” of the world’s climate crisis after unprecedented monsoon rains wracked the country since mid-June, killing more than 1,130 people.

One-third of Pakistan has been completely submerged by historic flooding, its climate minister says. Devastating flash floods have washed away roads, homes and crops - leaving a trail of deadly havoc across Pakistan.

"It's all one big ocean, there's no dry land to pump the water out," Sherry Rehman said, calling it a "crisis of unimaginable proportions."

The climate crisis is the prime suspect for the devastating scale of flooding in Pakistan, which has killed more than 1,000 people and affected 30 million.

But the catastrophe, still unfolding, is most likely the result of a lethal combination of factors including the vulnerability of poor citizens, steep mountainous slopes in some regions, the unexpected destruction of embankments and dams, and some natural climate variation.

The obvious cause is the record-breaking rainfall.

“Pakistan has never seen an unbroken cycle of monsoon [rains] like this,” said Sherry Rehman. “Eight weeks of non-stop torrents have left huge swathes of the country underwater. This is a deluge from all sides.”

She said the “monster monsoon was wreaking non-stop havoc throughout the country”.

Pakistan is accustomed to monsoon rains and flooding, Rehman said, but not like this.

“What we saw recently in the last eight weeks is unrelenting cascades of torrential rain that no monsoon has ever brought with it ever before,” she said.

The heavy rains are the latest in a series of catastrophes that Rehman said are exacerbated by climate change, including heatwaves, forest fires and glacial lake outbursts. The damage reflects how poorer countries often pay the price for climate change largely caused by more industrialized nations.

“Climate knows no borders and its effects can be disproportionately felt,” Rehman said. “When you see low pressure systems coming from the Bay of Bengal, they hit us before anyone is. So we’re on the front line of a global crisis.”

Cargo planes from Turkey and the United Arab Emirates began the flow of international aid, landing in Islamabad on Sunday with tents, food and other daily necessities. The United Nations will launch an international appeal for Pakistani flood victims on Tuesday in Islamabad.

The flood wreckage has hit Pakistan at a time when the country faces one of its worst economic crises, narrowly avoiding a default.

Later on Monday, the International Monetary Fund’s executive board approved the release of a much-awaited $1.17 billion for Pakistan, Pakistan’s Information Minister Maryam Aurangez told the AP. The announcement was a big relief for the country.

Pakistan and the IMF originally signed the bailout accord in 2019. But the release of a $1.17 billion tranche had been on hold since earlier this year, when the IMF expressed concern about Pakistan’s compliance with the deal’s terms under former Prime Minister Imran Khan’s government.

Last week, the United Nations in a statement said that it has allocated $3 million for U.N. aid agencies and their partners in Pakistan to respond to the floods and this money will be used for health, nutrition, food security, and water and sanitation services in flood-affected areas, focusing on the most vulnerable. 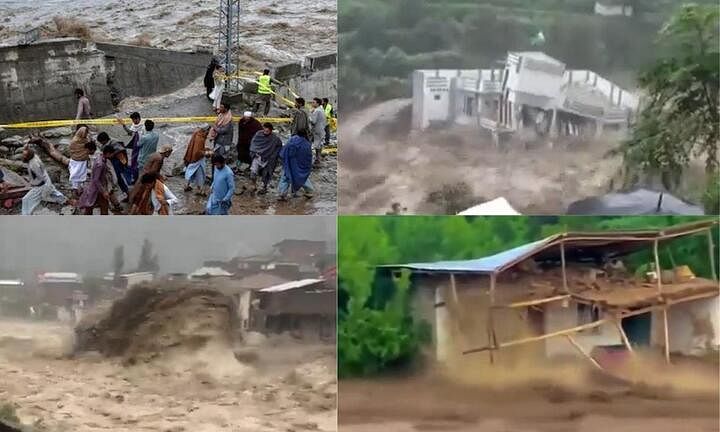