'Kamikaze' drones or 'loitering munitions', so-named because they self destruct and detonate their 35-40 kilogram warheads upon contact with their targets, have become an increasingly common sight above the battlefields of Ukraine

Wreckage of a Shahed-136 loitering munition in Odessa, in southern Ukraine | Twitter/@RALee85
Follow us on

Multiple drone strikes hit a building in the center of the southern Ukrainian port city of Odessa on Sunday, the second day in a row that unmanned aerial vehicles have struck there, according to the Ukrainian military. Ukraine claims that these drones have been supplied to Russia by Iran.

'Kamikaze' drones or 'loitering munitions', so-named because they self destruct and detonate their 35-40 kilogram warheads upon contact with their targets, have become an increasingly common sight above the battlefields of Ukraine.

In Odesa, an attack by an Iranian-made drone on Saturday killed one person, officials said, while throughout the weekend drones buzzed above the city, antiaircraft guns boomed and videos of frightened residents staring up at the sky circulating on social media.

Read Also
Russia on the back foot in Ukraine 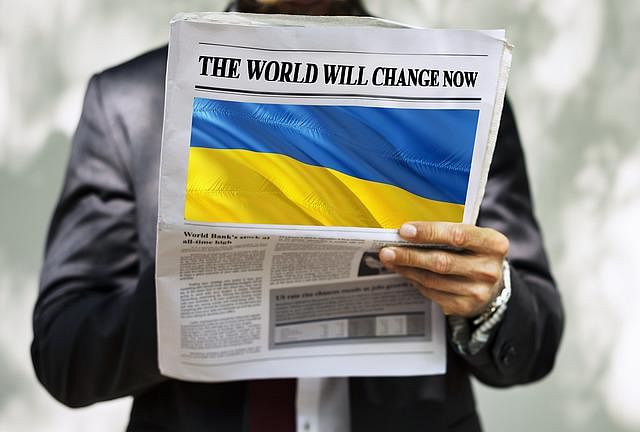 Two drones launched by Russian forces into the Odessa region in Ukraine hit military objects causing a fire and the detonation of ammunition, the South command of Ukraine's forces said on Monday.

"As a result of a large-scale fire and the detonation of ammunition, the evacuation of the civilian population was organised," the command said in statement on the Telegram.

What is this new Iranian weapon?

The Shahed 136 is an Iranian loitering munition swarm drone developed by Iran Aircraft Manufacturing Industries (HESA). At its core, it is designed to neutralize ground targets from a distance.

In September 2022, use of the drone was evidenced by photos of the remains of an Iranian HESA Shahed-136 operated by Russian forces during the Russo-Ukrainian War.

In response to these attacks, Ukrainian President Zelensky has denounced it as "a collaboration with evil". Diplomatic ties between Iran and Ukraine were reduced in Ukraine as another consequence of the attacks.

In a late-night address on Friday, Ukrainian President Volodymyr Zelenskyy has said the accreditation of the Iranian ambassador will be revoked and Iranian diplomatic staff in Kyiv reduced as a result of Russian forces using Iranian drones to attack Ukraine.

Ukrainian forces had shot down a total of eight Iranian-made drones in the conflict so far, Zelenskyy added.

For its part, Iran said that it would “respond appropriately” to Ukraine’s revoking of its ambassador’s accreditation over alleged drone sales to Russia while not directly denying it sold the aircraft.

In a short statement on Saturday, Iran’s foreign ministry spokesman Nasser Kanani said Ukraine’s decision to downgrade diplomatic relations with Iran was “regrettable” and based on “unconfirmed reports” by foreign media.