NASA is preparing to launch twin satellites this month that focus on how radio signals that pass through the Earth's upper atmosphere can be distorted by structured bubbles in this region called the ionosphere.
Agencies 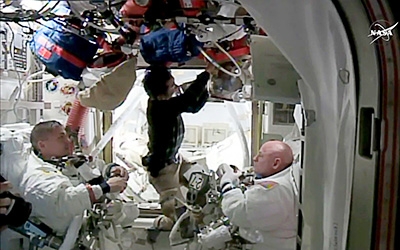 This October 28, 2015 NASA TV image shows US astronauts Kjell Lindgren(L) and Scott Kelly after entering the International Space Station following a spacewalk that lasted more than seven hours. Lindgren and Kelly got quite a workout Wednesday during a spacewalk to do upgrades and maintenance at the orbiting International Space Station, NASA said. The spacewalk was the first ever for veteran Scott Kelly, who is in the midst of a year-long stint at the ISS, and for his colleague, flight engineer Kjell Lindgren. AFP PHOTO/NASA TV/HANDOUT = RESTRICTED TO EDITORIAL USE - MANDATORY CREDIT "AFP PHOTO / NASA TV/HANDOUT" - NO MARKETING NO ADVERTISING CAMPAIGNS - DISTRIBUTED AS A SERVICE TO CLIENTS = |

Washington: NASA is preparing to launch twin satellites this month that focus on how radio signals that pass through the Earth's upper atmosphere can be distorted by structured bubbles in this region called the ionosphere. The twin E-TBEx CubeSats -- short for Enhanced Tandem Beacon Experiment - will launch aboard a SpaceX Falcon Heavy rocket from NASAs Kennedy Space Center in Florida, the US space agency said on Monday.

Especially problematic over the equator, the radio signal distortions can interfere with military and airline communications as well as GPS signals. Right now, scientists cannot predict when these bubbles will form or how they will change over time.

“These bubbles are difficult to study from the ground,” said Rick Doe, payload programme manager for the E-TBEx mission at SRI International, a non-profit research institute in Menlo Park, California. "If you see the bubbles start to form, they then move. We're studying the evolution of these features before they begin to distort the radio waves going through the ionosphere to better understand the underlying physics," Doe said.