The Japanese government submitted a goal of a 46 per cent cut by fiscal 2030 to the UN in October.
IANS 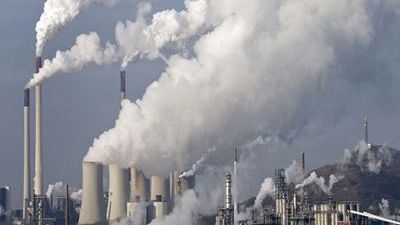 According to the preliminary data released by the Environment Ministry, the equivalent of 1.149 billion tonnes of carbon dioxide was emitted in the year through March 2021, marking a record low after the government started compiling data in fiscal 1990, reports Xinhua news agency.

However, the use of hydrofluorocarbons, which are super greenhouse gasses commonly used in refrigeration and air conditioning, increased 4.4 per cent from a year earlier.

The Japanese government submitted a goal of a 46 per cent cut by fiscal 2030 to the UN in October.

"We would like to expand renewable energy and accelerate the introduction of thermal insulation measures for homes," a Ministry official said.

By components, the industry sector reduced energy-related CO2 emissions by 8.3 per cent year-on-year in fiscal 2020, while such emissions in the transport sector and service providers dropped 10.2 per cent and 4.1 per cent, respectively.

However, the household sector reported a 4.9 per cent increase in emissions amid an expansion in teleworking and online classes amid the pandemic.

In Japan's power supply mix, power generated by renewables rose to account for 19.8 per cent with the expansion of photovoltaics, nuclear power stood at 3.9 per cent since many nuclear plants remained offline after the 2011 Fukushima nuclear disaster, and the ratio of coal fire fell 1 per cent from a year earlier to 31 per cent, according to the data.