The strikes took place as demonstrations continued to engulf the Islamic Republic after the death of Mahsa Amini, a 22-year-old Iranian Kurdish woman who was detained by the Iranian morality police

Members of exiled Komala Party inspect aftermath of bombing in the village of Zrgoiz, near Sulaimaniyah, Iraq, where the bases of several Iranian opposition groups are located, on Wednesday, September 28 | AP
Follow us on

At least thirteen people, including a pregnant woman, were killed and more than 32 wounded in Iraqi Kurdistan on Wednesday, after Iran launched drone strikes targeting the bases of an Iranian-Kurdish opposition group, the Kurdish Regional Government’s Health Ministry said.

Iran’s attacks targeted Koya, some 65 kilometers east of Irbil, said Soran Nuri, a member of the Democratic Party of Iranian Kurdistan. The group, known by the acronym KDPI, is a leftist armed opposition force banned in Iran. 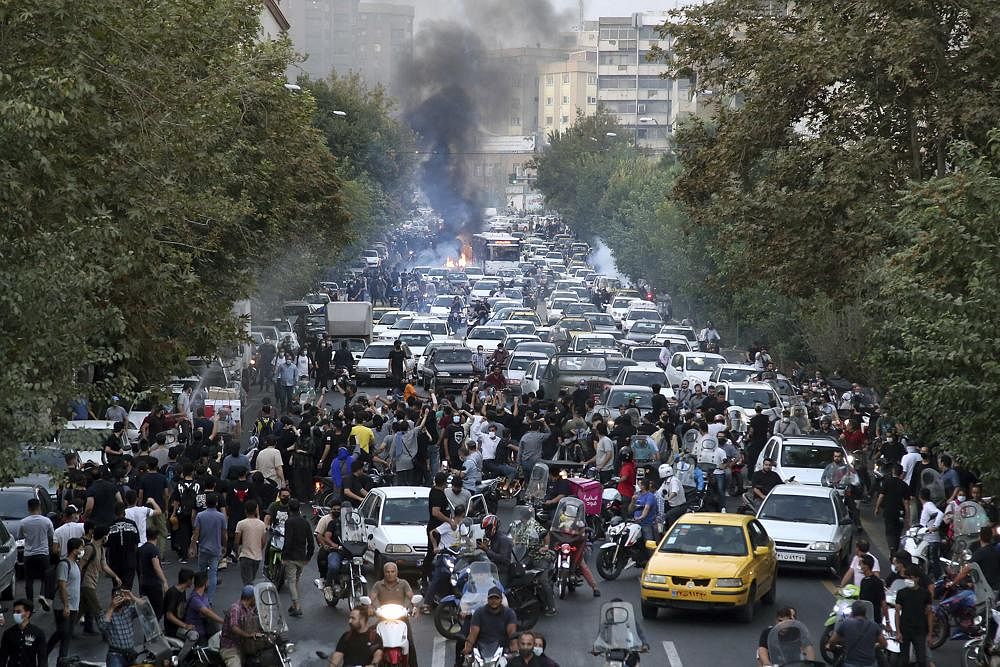 The United Nations High Commissioner for Refugees in a statement said the attacks “impacted the Iranian refugee settlements” in Koya, and that refugees and other civilians were among the casualties.

Iraq’s Foreign Ministry and the Kurdistan Regional Government have condemned the strikes.

Iran's Revolutionary Guard Corps, which owes its loyalty to Supreme Leader Ayatollah Ali Khameini, said that it had hit "separatist terrorists" who had supported recent "riots".

Iran’s state-run IRNA news agency and broadcaster said the country’s Revolutionary Guard targeted bases of a separatist group in the north of Iraq with “precision missiles” and “suicide drones.”

The strikes took place as demonstrations continued to engulf the Islamic Republic after the death of Mahsa Amini, a 22-year-old Iranian Kurdish woman who was detained by the Iranian morality police, for allegedly violating Iran' strict hijab requirements.

The police said Amini collapsed at a detention centre after suffering sudden heart failure. But her family have dismissed the police's version of events as a fabrication, and alleged that she was beaten by officers. She died in a hospital in the city after spending three three days in a coma.

Meanwhile, in Iran itself, protests continued unabated. Hengaw, a Kurdish Human Rights Group, said that at least 18 protesters were killed, at least 898 injured and well over a thousand detained by security forces as authorities sought to quell protests.

On Wednesday, Iran's President Ebrahim Raisi condemned Wednesday the "chaos" sparked by a wave of women-led protests over the death of Mahsa Amini while in the custody of the Islamic republic's morality police.

"Those who took part in the riots must be dealt with decisively, this is the demand of the people," said Raisi in a televised interview.

"People's safety is the red line of the Islamic republic of Iran and no one is allowed to break the law and cause chaos," he said.

"The enemy has targeted national unity and wants to pit people against each other," added the ultraconservative president, accusing Iran's archfoe the United States of stoking the unrest.