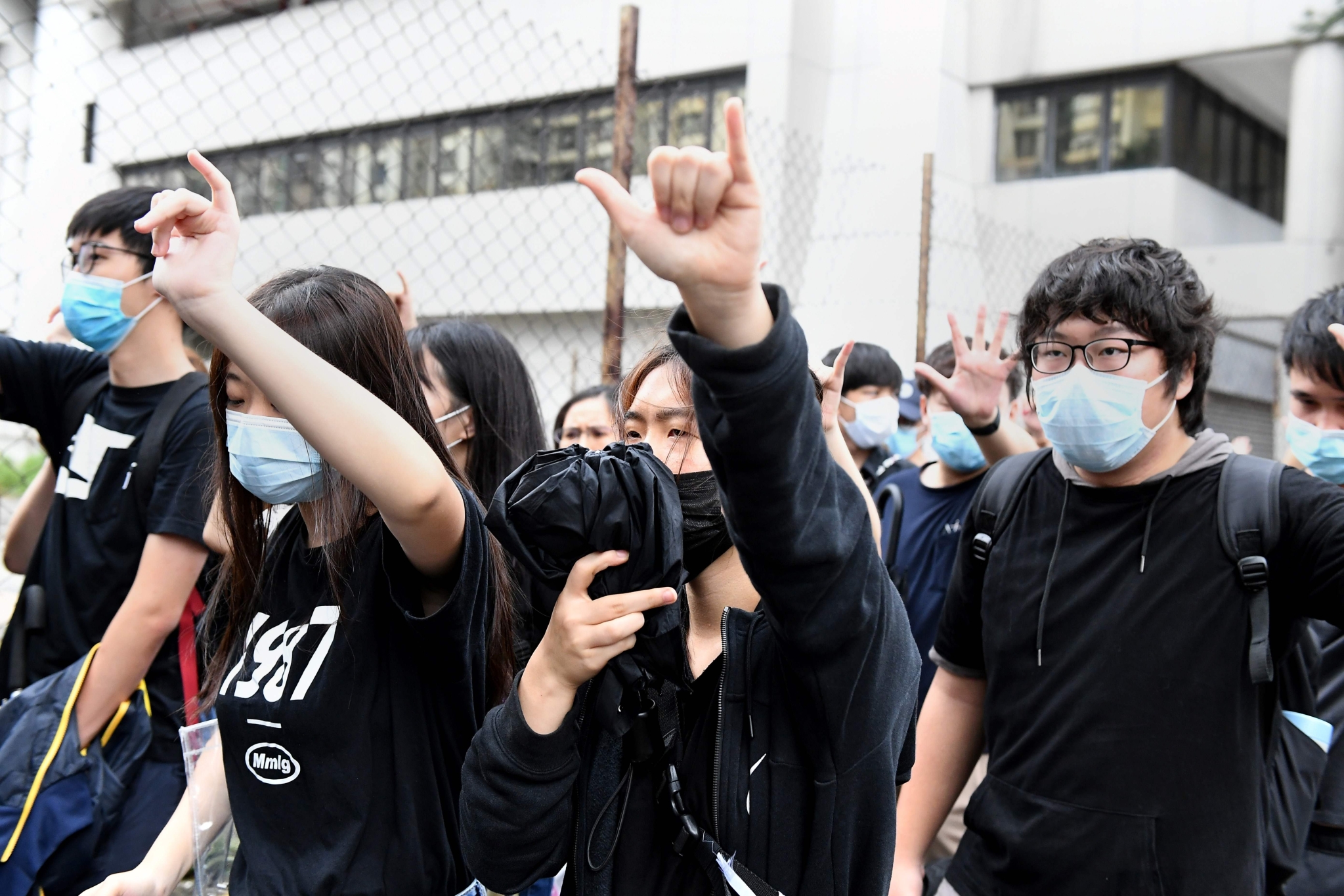 Protesters shout slogans as they gather outside the Eastern District Courts in HK. | pic: afp

Hong Kong: Hong Kong's government may censor the internet in a bid to contain months of increasingly violent pro-democracy protests, a cabinet member said Monday, after an emergency-law ban on demonstrators wearing face masks failed to quell the unrest.

The warning came as the international financial hub remained partly paralysed from three days of protests in which the city's rail network and business outlets seen as pro-China were badly vandalised.

The surge in protests was in response to the Hong Kong government's announcement on Friday it would invoke colonial-era emergency laws not used for more than 50 years to ban demonstrators from wearing face masks.

Chief Executive Carrie Lam said the ban was needed to contain the unrest, which began nearly four months ago and seen millions of people take to the streets demanding China stop strangling their freedoms.

In a radio interview Monday, Ip Kwok-him, a veteran pro-Beijing politician and member of Hong Kong's executive council, fuelled those concerns when he said controls on the internet could be introduced.

"At this stage, the government will consider all legal means to stop the riots," Ip told Commercial Radio. "We would not rule out a ban on the internet." The internet has been crucial to protesters, who have no public leaders and use online forums and encrypted messaging apps to mobilise.

The executive council is Hong Kong's cabinet, an advisory body to Lam. She announced the ban on face masks immediately after meeting with the council on Friday.

On Monday morning, a male university student and a 38-year-old woman were the first people to be charged with illegally wearing masks as supporters packed the courtroom, many wearing face coverings.

They were both charged with unlawful assembly, which carries up to three years jail time, and with defying the mask ban, which has a maximum one-year sentence. Both were released on bail.

Outside the court, demonstrators queued to get in, some chanting slogans like "Wearing a face mask isn't a crime" and "The law is unjust". Many said they feared the mask ban was just the first of more emergency orders to come.

"It's an excuse to just introduce other totalitarian laws, next is martial law," one protester outside the court, who gave his surname Lo, told AFP. The rallies were ignited by a now-scrapped plan to allow extraditions of criminal suspects to the mainland.

This fuelled fears of an erosion of liberties promised under the 50-year "one country, two systems" model China agreed to ahead of the 1997 handover by Britain.

After Beijing and local leaders took a hard stance to the initial protests, the demonstrations snowballed into a wider movement calling for more democratic freedoms and police accountability.

Lam has refused major concessions, but struggled to come up with any political solution. The past week has seen a particularly intense stretch of protests.

The worst clashes to date erupted on Tuesday as China celebrated 70 years of Communist Party rule, with a teenager shot and wounded by police as he attacked an officer.

Large parts of the railway network closed over the weekend because of the vandalism, while many shops and malls closed. Some subways stations and shops remained closed on Monday, a public holiday in Hong Kong.

Sunday witnessed the largest protests, with police firing tear gas to disperse tens of thousands of people marching on the main island. Clashes broke out at multiple other locations throughout the day, with dozens injured.

A warning flag was even raised on the roof of a People's Liberation Army barracks after protesters shone laser pens at the building, the first time Chinese troops in the city have made such a move.

On the mainland, Beijing flexed its muscles by pulling a top US basketball team's games from state broadcaster CCTV after its manager posted a tweet featuring the message "Fight for Freedom. Stand with Hong Kong". The Houston Rockets tried to calm waters, issuing apologies from players and the manager.