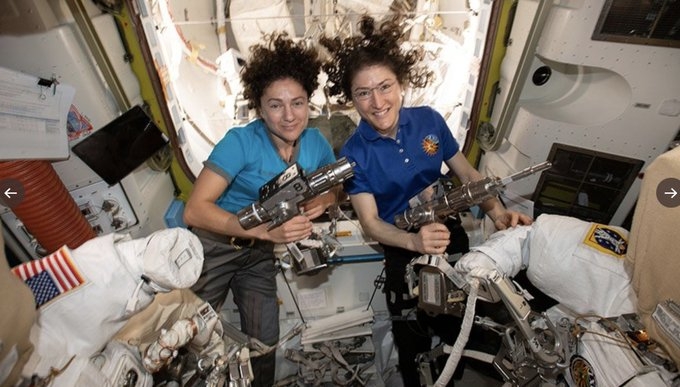 Women have once again inscribed their names in history, the postponed all-female spacewalk finally happened this week. NASA astronauts, Christina Koch and Jessica Meir, created history on Friday by stepping outside the International Space Station to replace a faulty battery charger.

The historic walk started at 7:38 a.m. Eastern time with the two female astronauts set their suits on battery power mode. Koch was the first to step out with a red tether attached to her suit, followed by Meir with her toolbag.

Originally, the spacewalk was scheduled for 5-and-a-half hours. However, it was extended to more than seven hours so the astronauts to complete a few additional tasks after they were able to finish-off all primary tasks in time.

The spacewalk was executed months after its initial plan was kept on hold because NASA did not have enough spacesuits in the right size.

Viewers who tuned into NASA's live-stream of the spacewalk saw the white-suited astronauts in stark relief against the black of deep space. Koch and Meir paused in their labors for a few minutes to take a call from US President Donald Trump.

"Station - this is President Donald Trump do you hear me?" he began. When the astronauts answered - after a long pause - he responded: "I was starting to get worried about you. You're in an interesting place."

Describing Meir and Koch as "brave, brilliant women," Trump hailed their "historic" mission. "You're doing an incredible job," he told the astronauts. "This is a first step, because we're going to the moon, and then we're going to Mars."

Trump was joined for the call by Vice President Mike Pence, NASA Administrator Jim Bridenstine and Ivanka Trump, the president's daughter and adviser. "For us, it's just coming out here and doing our job today," Meir said. "At the same time, we recognize that it is a historic achievement and we do of course want to give credit to all those that came before us.

"There have been a long line of female scientists, explorers, engineers and astronauts, and we have followed in their footsteps to get us where we are today," the 42-year-old biologist said.

The first woman to walk in space was Russia's Svetlana Savitskaya, who accompanied fellow cosmonaut Vladimir Dzhanibekov on an excursion outside their spacecraft in 1984.

Later that same year, Kathryn D. Sullivan became the first American woman to perform a spacewalk. "The first all-woman spacewalk is a milestone worth noting and celebrating as the agency looks forward to putting the first woman and next man on the Moon by 2024 with NASA's Artemis lunar exploration program," the US space agency said in a statement.

NASA acknowledged that the Koch-Meir mission was attracting a lot more interest than is usually the case with spacewalks. Koch, an engineer, arrived at the ISS on March 14 and is on her way to setting a new record for the longest period spent in space by a woman, as her mission is scheduled to last 328 days.

The current record, 288 days, was set by American astronaut Peggy Whitson. "In the end, I do think it's important, and I think it's important because of the historical nature of what we're doing. In the past women haven't always been at the table," Koch, 40, said in an interview shared by NASA.

At a media briefing before the spacewalk, NASA Administrator Jim Bridenstine said the agency would build on the astronauts' efforts and send the "next man and the first woman" to the moon by 2024, an effort the agency has dubbed "Artemis" after the twin sister of Apollo. Friday's spacewalk is another milestone toward making space more available to everyone, he said.