Wuzhou (China): China says one of two black boxes from the China Eastern plane crash was found in severely damaged condition. The recorder is so damaged that they are not able to tell whether it is the flight data recorder or the cockpit voice recorder.

Mao Yanfeng, the director of the accident investigation division of the Civil Aviation Authority of China, told a news conference Wednesday that an all-out effort is being made to find the other black box.

Recovering the so-called black boxes is considered key to figuring out what caused the crash. The search for clues into why a Chinese commercial jetliner dove suddenly and crashed into a mountain in southern China had been suspended Wednesday as rain slickened the debris field and filled the red-dirt gash formed by the plane’s fiery impact.

Earlier, searchers had used hand tools, drones and sniffer dogs under rainy conditions to comb the heavily forested slopes for the flight data and cockpit voice recorders, as well as any human remains. Crews also worked to pump water from the pit created when the plane hit the ground, but their efforts were suspended around midmorning because small landslides were possible on the steep, slick slopes.

Video clips posted by China’s state media showed small pieces of the Boeing 737-800 plane scattered over the area. Mud-stained wallets, bank and identity cards have also been recovered. Each piece of debris has a number next to it, the larger ones marked off by police tape.

Relatives of passengers began arriving Wednesday at the gate to Lu village just outside the crash zone, where they, along with reporters on the scene, were stopped by police and officials who used opened umbrellas to block the view beyond.

One woman was overheard saying her husband, the father of their two children, had been on board the flight.

“I’m just going in there to take a look. Am I breaking the law?” she said. The woman and a companion were then escorted away and reporters told to stop filming.

Another man, who gave just his surname, Ding, said his sister-in-law had been on the plane. He said he hoped to visit the site but had been told little by the authorities.

“We’re just coming here to have a look,” said Ding, adding, “My heart sank all of a sudden,” upon hearing about the crash. He too was escorted away.

China Eastern Flight 5735 was carrying 123 passengers and nine crew from Kunming in Yunnan province to Guangzhou, an industrial center on China’s southeastern coast, when it crashed Monday afternoon outside the city of Wuzhou in the Guangxi region. All 132 people on board are presumed killed.

Investigators say it is too early to speculate on the cause. The plane went into an unexplained dive an hour after departure and stopped transmitting data 96 seconds into the fall.

An air-traffic controller tried to contact the pilots several times after seeing the plane’s altitude drop sharply, but got no reply, a grim-faced Zhu Tao, director of the Office of Aviation Safety at the Civil Aviation Authority of China, said at a Tuesday evening news conference.

“As of now, the rescue has yet to find survivors,” Zhu said. “The public security department has taken control of the site.”

China Eastern is headquartered in Shanghai and is one of China’s three largest carriers with more than 600 planes, including 109 Boeing 737-800s. China’s Transport Ministry said China Eastern has grounded all of its 737-800s, a move that could further disrupt domestic air travel already curtailed because of the largest COVID-19 outbreak in China since the initial peak in early 2020.

The Boeing 737-800 has been flying since 1998 and has a well-established safety record. It is an earlier model than the 737 Max, which was grounded worldwide for nearly two years after deadly crashes in 2018 and 2019.

Monday’s crash was China’s worst in more than a decade. In August 2010, an Embraer ERJ 190-100 operated by Henan Airlines hit the ground short of the runway in the northeastern city of Yichun and caught fire. It carried 96 people and 44 of them died. Investigators blamed pilot error. 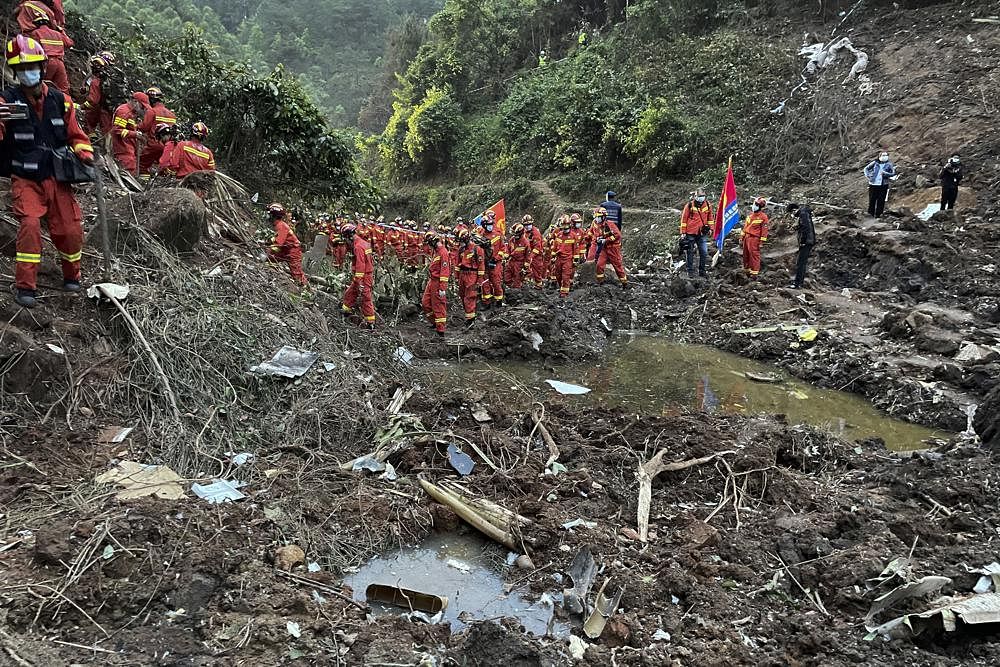