The recent explosions at the air base in Russia-annexed Crimea have been explained by Vladimir Putin-led country as an accident, however, experts have said that satellite imagery points to a likely attack by Ukrainian forces.

Amid escalating war between Moscow and Kyiv, new satellite pictures of explosions at a Russian air base in Crimea are released, comparing the condition of the facility as it was on May 16, and how it looks now.

The recent explosions at the air base in Russia-annexed Crimea have been explained by Vladimir Putin-led country as an accident, however, experts have said that satellite imagery points to a likely attack by Ukrainian forces.

Moscow has said that the air base was not targeted by an attack, however, the new satellite images contradict the claim. The images show the base was "hit with something" and at least nine airplanes were destroyed, as per analyst Oliver Alexander of AFP.

#Satelliteimagery from August 10, 2022 of #Saki airbase in Novofedorivka, #Crimea, #Ukraine showing the aftermath of the reported attack on the Russian airbase where you can see the extent of the damage caused by explosions and fires. pic.twitter.com/B67lfdO1jd

Alexander said, "If it was an accident, it would have required 4-5 people through cigarettes on the same spot or hitting bombs with a hammer, incredibly unlikely."

The exact cause of the explosions, whether it is special forces sabotage or missile strike, is still unknown. Eliot Higgins, founder of the investigate journalism group named Bellingcat, has stated that the images show three craters and evidence of "a massive fire across the base." 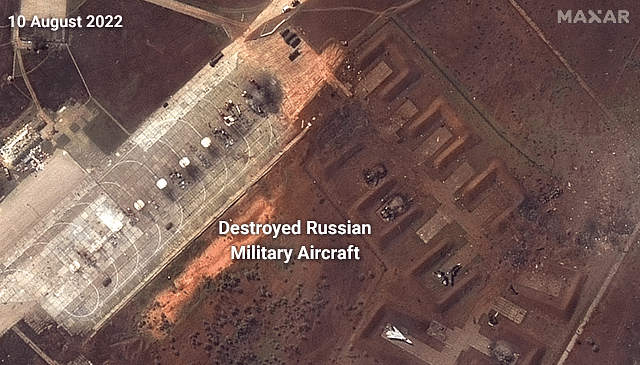 Russian jets at Saki airbase after the attack | Maxar Taking to Twitter, he also wrote, "One way to interpret those craters is precise strikes from a long-range munition."

Meanwhile, Moscow annexed Crimea in the year 2014 in the wake of nationwide street demonstrations that led to the ouster of a Kremlin-friendly President. Such protests precipitated fighting between the army and separatists in eastern Ukraine. Russia, later, launched a full-scale military operation at the former Soviet country.