The federal government said it is sending the air force to assist with evacuations and to support supply lines.
Associated Press 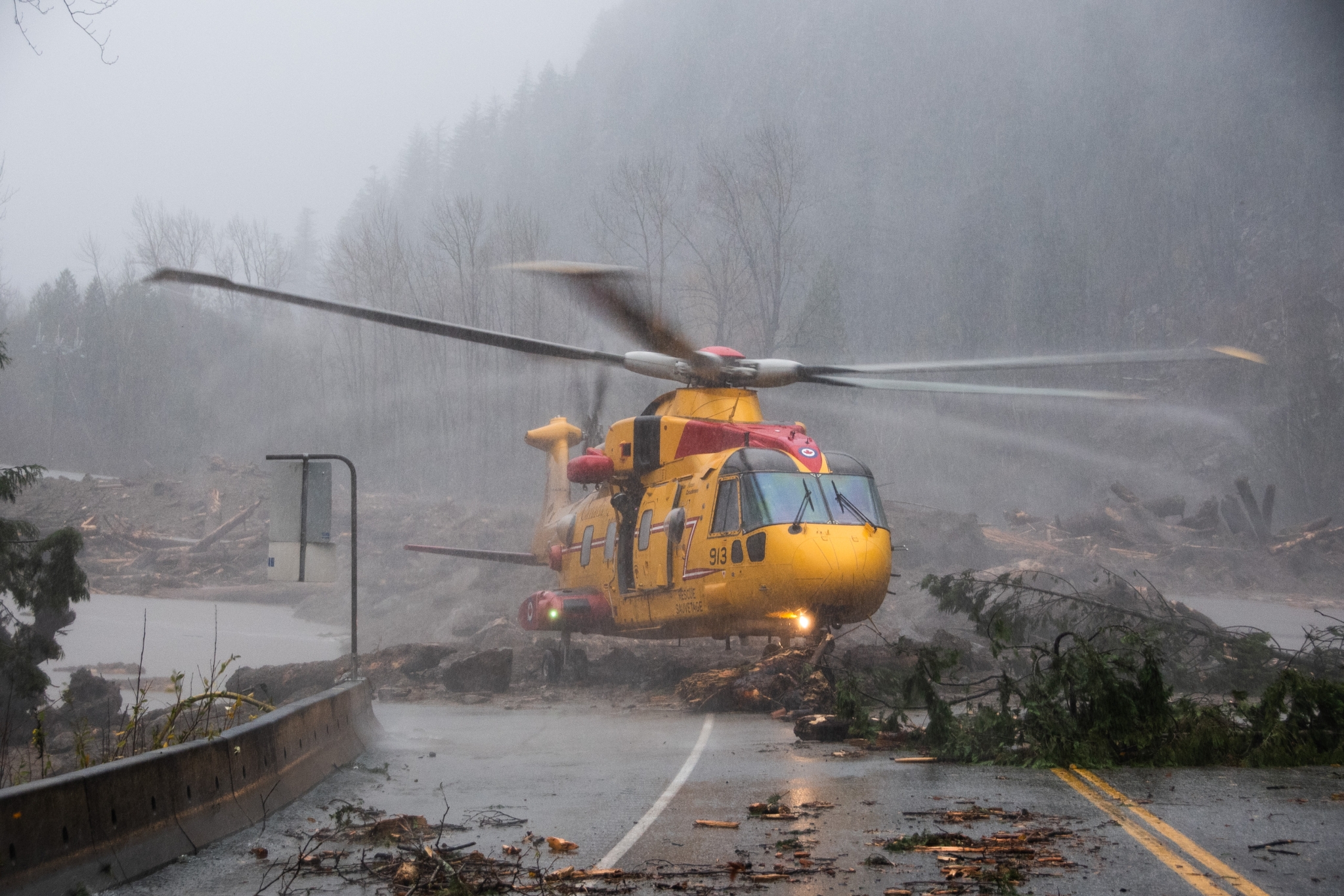 Every major route between the Lower Mainland of British Columbia, where Canada's third-largest city of Vancouver is, and the interior of the province has been cut by washouts, flooding, or landslides following record-breaking rain across southern British Columbia between Saturday and Monday. The body of a woman was recovered from one of the mudslides late Monday.

“Torrential rains have led to terrible flooding that has disrupted the lives and taken lives of people across B.C. I want people to know that the federal government has been engaging with the local authorities,” Canadian Prime Minister Justin Trudeau said in Washington. “We're sending resources like the Canadian Armed Forces to support people but also we'll be there for the cleanup and the rebuilding after impacts of these extreme weather events.”

The federal government said it is sending the air force to assist with evacuations and to support supply lines.

Minister of Emergency Preparedness Bill Blair said the military will protect residents against further flooding or landslides. Military helicopters already helped evacuate about 300 people from one highway where people were trapped in their cars Sunday night following a mudslide,

Horgan said the state of emergency will include travel restrictions so the transport of essential goods medical and emergency services will reach the communities that need them. He asked people not to hoard goods.

“These are very challenging times. I've been at this dais for two years now talking about challenging times we have faced — unprecedented challenges with public health, wildfires, heat domes, and now debilitating floods that we have never seen before,” Horgan said.

Horgan said over the past six months there have been drought conditions in Merritt, where the river was at its lowest point in living memory and where people had to be evacuated because of wildfires in temperatures that were unprecedented. And now, he said, much of the community is underwater.

The total number of people and vehicles unaccounted for had not yet been confirmed near the town of Lillooet. Investigators had received reports of two other people who were missing but added that other motorists might have been buried in a slide on Highway 99.

Elsewhere in the province, Abbotsford Mayor Henry Braun said residents of the low-lying Sumas Prairie area south of the city face a significant risk to life and must get out immediately.

An evacuation order was issued for about 1,000 properties Tuesday as flooding linked to a severe weekend rainstorm pushed up water levels in the area which is home to many large dairy farms and other agricultural and livestock operations.

Braun said in a news briefing Wednesday that conditions were dire overnight because a key pumping station was in danger of being overwhelmed. The station was the only thing keeping water from the nearby Fraser River from engulfing most of the Sumas Prairie flats, he said.

“I’m feeling much better today than last night,” he said, although he cautioned the danger has not passed and river levels, which have dropped two meters since the storm ended, must drop further before flood gates can be opened to allow even more water to escape.

“Overnight we brought in additional helicopters when we realized the flooding was worsening in the East Prairie area,” he said. Three helicopters carried people to safety overnight, said Lee, while 11 teams in boats also brought out trapped residents.

No one was unaccounted for, Abbotsford Police Chief Mike Serr said.

About 80 callers were still awaiting help by daylight and responders planned to “work through the queue” through the morning, he said.

Agriculture Minister Lana Popham said thousands of animals had died and the province was rushing to get veterinarians to other animals that are in danger.

"I can also tell you that many farmers attempted to move animals and then had to walk away because the roads were disappearing beneath them," she said.