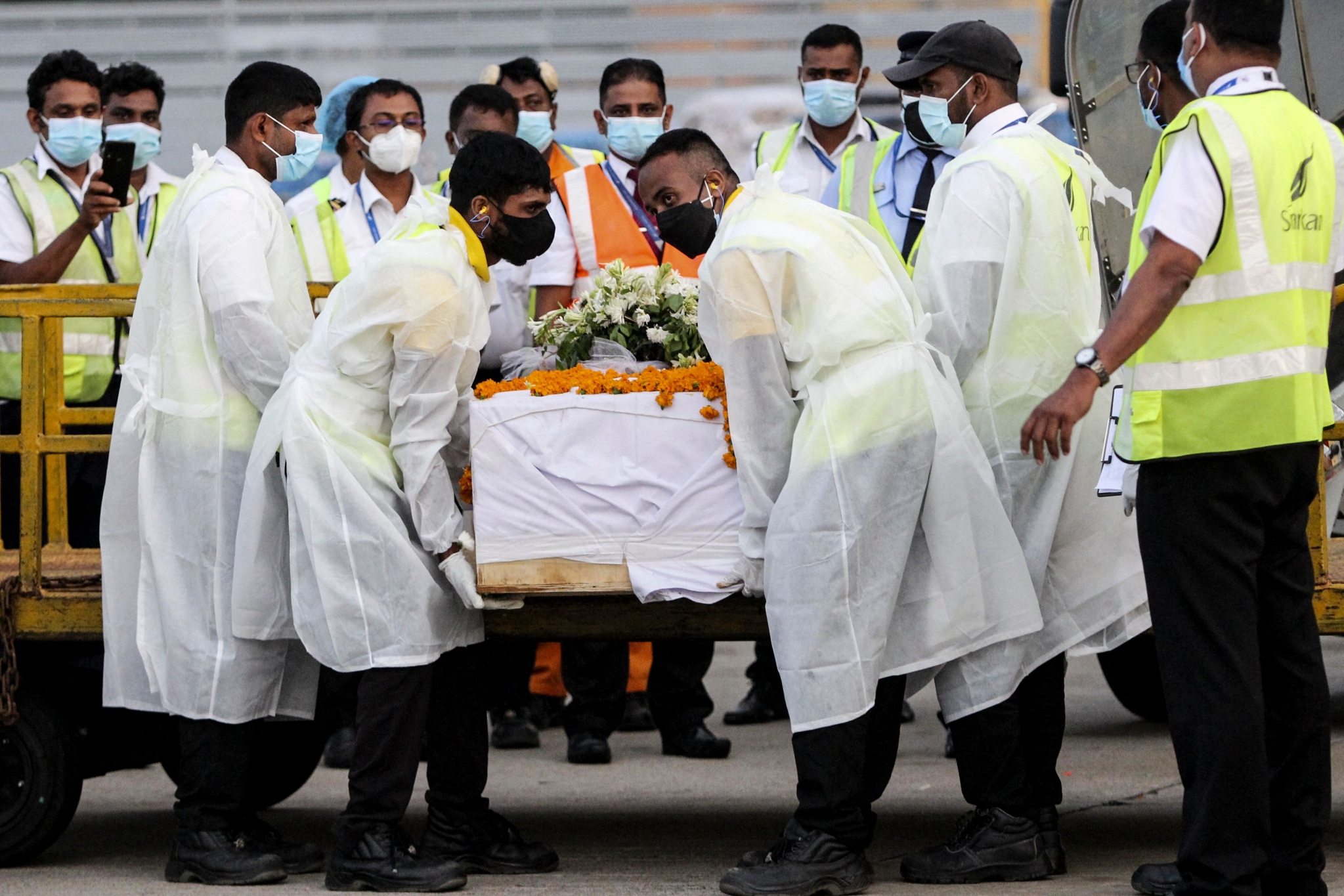 Airport staff unload a coffin carrying the remains of the Sri Lankan factory manager at Bandaranaike International airport in Katunayaka, near Colombo on December 6, 2021 who was beaten to death and set ablaze by a mob earlier in Pakistan. | (Photo by AFP)

Colombo: The mortal remains of a Sri Lankan national, who was lynched by a mob in Pakistan over allegations of blasphemy, were brought to Colombo on Monday, even as authorities in the Pakistani province of Punjab arrested more suspects involved in the grisly incident.

The wooden coffin carrying the remains was brought to Sri Lanka from Lahore's Allama Iqbal International Airport on a Sri Lankan Airlines flight. "Human remains of late Don Nandasri P Kumara Diyawadanage. From Lahore to Colombo" was transcribed on the coffin.

The remains of Kumara were brought to Colombo from Lahore on a special SriLankan Airlines flight at state cost. The remains were received by the next-of-kin at the Bandaranaike International Airport here, officials said.

From the Colombo international airport, the remains were sent to the nearby Negombo hospital for the legal proceedings, officials said.

A mob of over 800 men, including supporters of hardline Islamist party Tehreek-e-Labbaik Pakistan (TLP), attacked a garment factory and lynched its general manager Priyantha Kumara and set him on fire over allegations of blasphemy on Friday last in Sialkot district, some 100 km from Lahore.

Earlier, the remains were brought to the Lahore airport in an ambulance where Punjab Minister for Minority Affairs Ejaz Alam Augustine handed over the coffin to the Sri Lanka High Commission officials. The body was transported on the Sri Lankan Airlines flight.

He is survived by his wife and two sons aged 14 and 9.

Nilushi Kumara, the widow of the Sri Lankan export manager, has appealed to the Pakistani government for justice and compensation over her husband's killing and urged for the safety of all Sri Lankans on Pakistani soil.

Speaking to reporters this morning, she refuted the claim that her husband could have done any act to upset the religious sentiments in Pakistan.

She described her husband as an innocent individual who cared for his employees and colleagues. He respected the Pakistani laws and lived as a peace-loving citizen. He also respected all religious views.

"My husband lived in Pakistan for 11 years, and he never once complained about the people or his colleagues there" she said.

The funeral arrangements are to be notified later, family sources said.

"A total 131 suspects, including 26 main ones, have been arrested so far. The 26 prime suspects have played a key role in inciting the people, lynching Kumara and setting his body ablaze," the Punjab Police tweeted on Monday.

Some 15 prime suspects were presented before the Anti-Terrorism Court Gujranwala on Monday where they were remanded in police custody for 15 days.

According to police, after brutally killing Kumara, the mob also wanted to kill the factory owner and set the building on fire.

Kumara was working as general manager in Rajko industries, which deals in sportswear, for the last seven years.

The horrific incident sparked outrage across Pakistan with all sections of the society condemning it and calling for the culprits to be punished.

Prime Minister Imran Khan on Sunday announced Tamgha-i-Shujaat (civil award for bravery) for the victim's colleague, Malik Adnan, who tried to rescue him from the mob.

The CCTV footage showed production manager Adnan, confronting a group of angry men all by himself and making desperate attempts to avert the flare-up and then trying to shield Kumara from the mob.

The mob later overpowered Adnan and dragged Kumara out on the road and tortured him with kicks, stones and iron rods, killing him on the spot. The mob had then set the body on fire over allegations of blasphemy.

According to the post-mortem report, nearly all bones of Kumara were broken and his body was 99 per cent burnt in the horrific lynching incident.

Kumara had gone to Pakistan in 2011 after he got a job as a mechanical engineer at an apparel factory in Faisalabad. After a year, he joined Sialkot's Rajco Industries as its general manager and was the only Sri Lankan national working in the factory.

The Sri Lankan Parliament, President Gotabaya Rajapaksa and Prime Minister Mahinda Rajapaksa have condemned the brutal killing and has expressed hope that Pakistan Prime Minister Khan's government would bring the guilty to justice.