First ever photo of a black hole revealed by astronomers 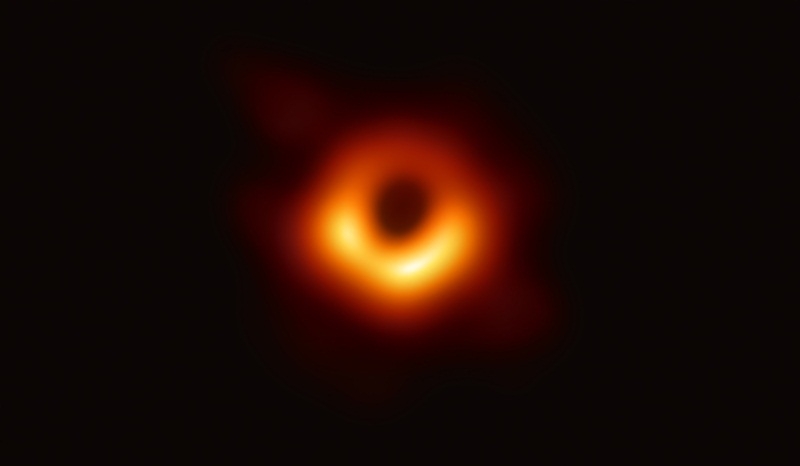 A handout photo provided by the European Southern Observatory on April 10, 2019 shows the first photograph of a black hole and its fiery halo, released by Event Horizon Telescope astronomers (EHT), which is the "most direct proof of their existence," one of the project's lead scientists told AFP. |

Paris: Astronomers on Wednesday unveiled the first photo of a black hole, one of the star-devouring monsters scattered throughout the Universe and obscured by impenetrable shields of gravity.

The image of a dark core encircled by a flame-orange halo of white-hot gas and plasma looks like any number of artists’ renderings over the last 30 years. But this time, it’s for real. Coined in the mid-60s by American physicist John Archibald Wheeler, the term “black hole” refers to a point in space where matter is so compressed as to create a gravity field from which even light cannot escape.

Scientists have been puzzling over invisible “dark stars” since the 18th century, but never has one been spied by a telescope, much less photographed. The supermassive black hole now immortalised by a far-flung network of radio telescopes is 50 million lightyears away in a galaxy known as M87.

But locking down an image of M87’s supermassive black hole at such distance is comparable to photographing a pebble on the Moon. In the end, it was a team effort.

“Instead of constructing a giant telescope that would collapse under its own weight, we combined many observatories,” an astronomer said. Over several days in April 2017, eight radio telescopes in Hawaii, Arizona, Spain, Mexico, Chile, and the South Pole zeroed in on two black holes.

It took another year, however, to piece together the data into an image. “To be absolutely sure, we did the work four times with four different teams,” said a scientist. Each team came up with exactly the same spectacular, history-making picture of a dark circle encased in a flaming-red halo.