HomeWorldAt least one dead, 20 injured as Russia fires over 20 missiles at Ukraine on New Year's Day

At least one dead, 20 injured as Russia fires over 20 missiles at Ukraine on New Year's Day

The latest attack took place just after midnight on Saturday and has left 30 per cent of the capital without power due to emergency shutdowns.

This satellite image provided by Maxar Technologies shows a closeup view of fires in an industrial area and nearby fields in southern Chernihiv, Ukraine, during the Russian invasion | AP
Follow us on

At least one person died while over 20 were injured as Russia fired over 20 missiles at Ukraine on New Year's Day, Kyiv Mayor Vitali Klitschko informed on Saturday.

The latest attack took place just after midnight on Saturday and has left 30 per cent of the capital without power due to emergency shutdowns.

The new assault set off air raid sirens across the country, and some people in Kyiv took to their balconies shouting “Glory to Ukraine! Glory to the heroes”.

Russia has been attacking vital Ukraine infrastructure since October with barrages of missile and drones, causing sweeping power blackouts as the cold weather bites.

Read Also
Ukraine targeted in another attack, as Russia launches over 100 missiles in waves 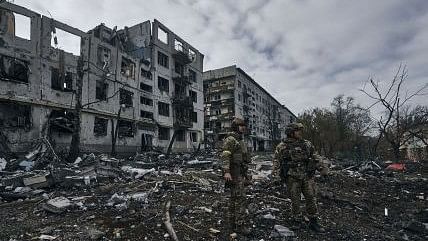 'Russia in league with the devil'

Amid the fresh round of attacks, Ukraine President Volodymyr Zelenskiy in his New Year address said Moscow was in league with the devil.

Zelenskiy speaking in a video address noted that Russia had also launched attacks at Easter and Christmas.

"They call themselves Christians ... but they are for the devil. They are for him and with him," he said.

At least a dozen people were injured in the attacks. A Japanese journalist was among the wounded and taken to a hospital, Kyiv mayor Vitali Klitschko said. Army chief Valeriy Zaluzhnyi said air defences shot down 12 incoming cruise missiles, including six around the Kyiv region, five in the Zhytomyrskiy region and one in the Khmeltnytskiy region.