As Modi parties in US, Sharif gets Kerry rap 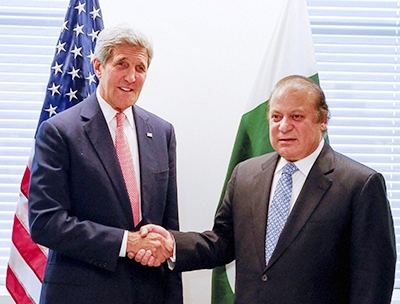 Kerry commended Sharif’s pledge to not distinguish between terrorist groups and “urged additional action against the Haqqani Network and Lashkar-e-Tayyiba,” State Department spokesman John Kirby said following the two leaders’ meeting in New York on sidelines of the UN General Assembly session. “He acknowledged the crucial role Pakistan has played in Afghan reconciliation talks and noted the importance of dialogue with India for fostering regional stability and economic integration,” Kirby said.

“They confirmed our long-term strategic bilateral cooperation based on joint interests and mutual respect. The Secretary underscored that the US shares an interest in a stable, democratic and prosperous Pakistan and welcomed the Prime Minister’s commitment to complete Pakistan’s IMF program reforms,” Kirby added.

The banned Lashkar-e-Taiba terrorist group carried out the audacious 2008 Mumbai attack that killed 166 people. The Haqqani network, founded by Jalaluddin Haqqani, has been blamed for the Indian embassy bombing in Kabul in 2008 that left 58 people dead, a 2011 attack on the US embassy in Kabul, and several big truck bombing attempts in Afghanistan. It was designated as a terrorist organisation by the US in September 2012.

Meanwhile, In Islamabad, Pakistan Foreign Office said that Sharif shared concerns over alleged Indian violations of ceasefire agreement on the Line of Control (LoC) with Kerry.

“The Prime Minister shared his views on relations with India and expressed deep concern over the Indian ceasefire violations on the LoC and the working boundary,” it said.

“The Prime Minister reaffirmed Pakistan’s commitment to peaceful resolution of all outstanding issues through dialogue,” it further said. The Prime Minister and Secretary Kerry discussed bilateral cooperation on a wide range of issues.

Kerry conveyed that President Obama looked forward to the visit of Prime Minister Sharif to Washington in October. Peace and reconciliation efforts in Afghanistan, as well as the security situation, were also discussed.