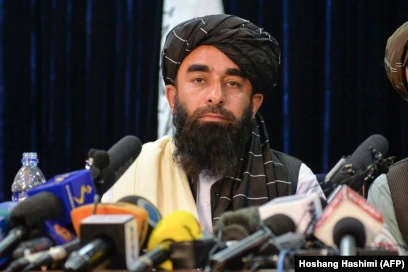 Taliban spokesman Zabihullah Mujahid on Tuesday said that the militant group is committed to resolve the problem in Panjshir peacefully.

This statement comes after the Taliban began amassing fighters around the defiant Panjshir Valley, Ahmad Massoud, the son of the legendary anti-Taliban commander Ahmad Shah Massoud, said he was hoping for negotiations but was ready for war.

With militia fighters and former government soldiers in its ranks, the National Resistance Front (NRF) has set up machine gun nests, mortars and surveillance posts fortified with sandbags in anticipation of a Taliban assault on their bastion, the Panjshir Valley.

Earlier, Taliban spokesman Zabihullah Mujahid had said his forces had retaken Deh Salah and Pul-e-Hesar districts from Resistance 2 in the Baghlan province, next to Panjshir.

Mujahid stated that all media outlets including National Radio Television have resumed their activities "without any fear or hesitation."

Afghanistan's "acting" President Amrullah Saleh has highlighted the dire "humanitarian situation" in Andarab valley of the northern Baghlan province and accused the Taliban of committing human rights violations in the region.

"Talibs aren't allowing food and fuel to get into Andarab valley. The humanitarian situation is dire. Thousands of women and children have fled to the mountains. Since the last two days Talibs abduct children and elderly and use them as shields to move around or do house search," Saleh had tweeted. 'Taliban abducting children, elderly to use as shields...': Militants lay siege as Afghanistan's...