The tussling world of Nagas via photographer Pablo Bartholomew's lens

Padma Shri Awardee, photographer Pablo Bartholomew, talks about his show ‘The Nagas’, the anthropological chronicles that emerge from the tribals’ pictorial portrayal, and about the state of flux they find themselves in even today

Photographer Pablo Bartholomew comes from interesting antiquity. His family emigrated from Burma (Myanmar) during World War II to India, and on their way, they passed India’s North-Eastern states, tribal lands. The Nagas were some people they encountered on their long, tumultuous journey into India and they have fond memories of the hospitality and kindness they received from the group. While wary of Naga tribes, given their head hunter past, the Bartholomews continued to navigate the terrain, to reach safety. The photographer, son of erstwhile art critic and lensman Richard Bartholomew, inspired by this history, spent some sabbatical time in the region, and over 11 years — 1989 to 2000 — this exhibition, The Nagas, came to fruition. He spent that time photographing the Nagas, their ways, their dress, the ornaments they wore (think large metal spears in extended ear lobes), how they wedded and how they congregated… using a jeep that served as a photo studio, a generator and for transportation across the hilly regions with their perilous, snaking mountain passes. The exploratory show, which examines the rural, farming, warrior community, is currently exhibited at Byculla’s Nine Fish Art Gallery, presented by the art and culture portal, Dot Line Space. We spoke to Bartholomew to know more about the process of having immersed himself in an ethos he feels so close to, observing that the pictures reveal stunning aspects of tribal life, animist beliefs, religion, diet, along with the Nagalandese’s acceptance of modernity and how they warmed up to modern ways. Adopting westernisation, cutting north-eastern fabrics into western silhouettes, exuding western chic, uniting their pantheistic past with Christian philosophy and faith which many converted to across the 19th and 20th centuries — whilst entering the 21st century.

How did the Nagas become a muse?

Part of being a photojournalist led me to the Naga tribes. My father was a refugee and left Myanmar during the Second World War. He walked the Ledo Road (also known later as the General Stilwell Road) built by the American GIs. That road led to some areas of the Naga tribes. He told me this story when I was a child. The family was exhausted and they didn’t have food to eat, and he described the Nagas as being very kind in terms of food and shelter. Those little moments were very reassuring. The details have remained in my head. In my late 20s and early 30s when I attained some success, I could take a sabbatical to explore those stories that I’d heard. Can you tell us about the tussle between western ideas and the Naga today?

The Nagas are in two worlds. The compression of time has been extremely rapid. In the last three generations, they have come out from a megalithic age into the modern world. With them becoming rapidly modernised and no recorded history there are still open questions of their migration and origins. My first endeavour was to be able to try and capture them in a classic anthropological manner. Later, I went back to look at them in a documentary style and explore the way they live today.

What have been your observations about the transition of the Nagas from Animism to Christianity?

The Nagas are Christian today, with few Animists left (principally on the border areas). People had been made to believe that the animist religion was evil when they first started converting to the Christian faith. For example, if you were a warrior of a certain calibre or if you were a rich person, you wore certain kinds of fabric weaves and owned certain ritual objects. With their new religion, many of those things got destroyed which meant the history of a people got decimated.

One of my favourite images is the Chief of the Army, standing proudly in his skull hut. I shot the image in 1989 and when I went back later, the skull hut had been dismantled because the villagers who had converted to Christianity pressurised the old, ailing chief to bring it down because there was a sense of shame of their ancestral practice of headhunting. For me, it’s one of the most important images because it gives you a sense of their ancient practice and photographically it’s a very strong and powerful image. 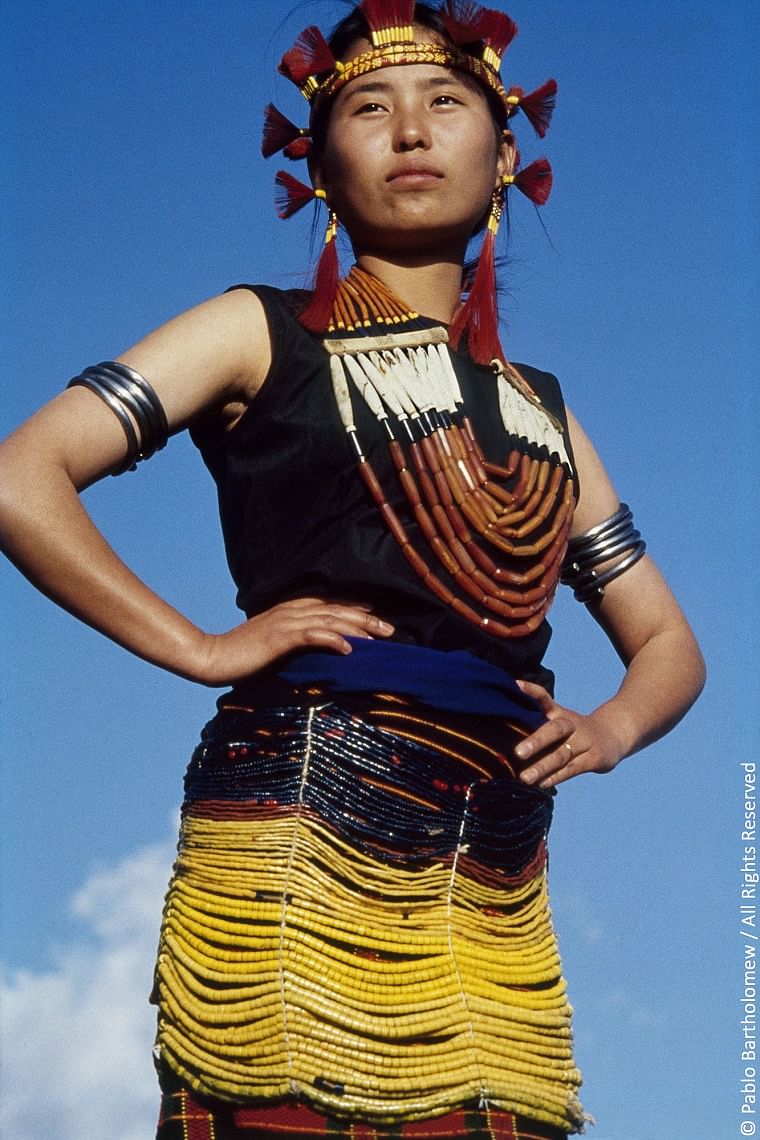 Can you talk about the challenges you encountered in implementation?

Most of my work is never quite finished because the projects go on forever. What I went out to do here was very idealistic and romantic. It was a very difficult terrain to work in purely because of the insurgency, the armies. They had their guerrilla warfare. Not many wanted to interact with a photographer and journalist wandering through those areas. When you arrived in a village it was there that you could spend a night, but the villagers would be scared of having you there because they felt that if something happened to you, they would have trouble.

The other thing is that the hills are deceptive and you may have to go round and round to get to a place that is just 10 km. away. The hill roads are sparsely cut. Also if one wooden bridge wasn’t functioning, you’d probably have to come back next year, and all your planning for that year would go to waste. The process is that you get as much as you can and over several years use what you have, and that’s what I’ve tried to do.

What is a standout aspect of the tribes?

There spectacular coded sense of dress, which incorporates self-woven fabric, headdresses adorned with animal parts, jewellery made from beads, brass and silver ornaments, markings on the body and face tattoos that are a function of their traditions. And such a technique often makes contemporary fashion seem banal, flippant, and pedestrian. There exists an unwritten code, a visual language that governed who could wear what, when, and what it signified. This attire comes from the deep relationship these tribes share with the environments they inhabit. Their rites and rituals are a celebration of amazing yet nuanced grace and sophistication.

Read Also
'I used to doodle in my notebook during my engineering days', reveals Popular doodle artist and...