“Mrs Gandhi was so upset about the whole affair she had tears in her eyes.”

Much has been made of Sanjay Gandhi’s dubious role during the emergency. And the hold he had over Mrs. Indira Gandhi. The excerpt below from ‘The Emergency: A     Personal History’ documents Sanjay Gandhi’s marriage to Maneka Gandhi and also details his shenanigans during his failed bid to set up a Maruti car factory.

Sanjay returned to India in 1968, by which time his mother had become PM of India. In 1974 Sanjay surprised everyone by getting married to Maneka Anand, daughter of an army colonel, after a whirlwind romance following a chance meeting at a wedding reception. Maneka was a bright student at Delhi’s prestigious Lady Shri Ram College, who was attractive enough to have got an assignment as a part-time model. Although extremely young, Maneka had a mind of her own and was not intimidated by the stature of her husband’s family. She was a vegetarian and a great believer in animal rights and environmental causes who brought with her to her new family home a large, fierce dog that did not get on with the gentler pets kept by Rajiv Gandhi’s family.

The government in the 1960s was still undecided about its policy regarding the private manufacture of an indigenous small car. But within a short time of Sanjay’s return to India in 1968, the government and the Planning Commission veered around to the view that the manufacture of a small car in the private sector should be permitted. Sanjay, meanwhile, busied himself with building a prototype small car in a shack in Gulabi Bagh, a run-down part of Delhi and a favourite haunt of truck drivers.

The prototype of Sanjay’s car, named Maruti, after the god of the winds, was nowhere near complete. But the wheels of government moved at a fast pace to ensure that Sanjay could live out his dream. Although he lacked the technical proficiency and the capital for such a major enterprise, on 30 September 1970 Sanjay was awarded a Letter of Intent (Lol) to manufacture 50,000 cars annually. Both the then minister of industrial development Fakhruddin Ali Ahmed and his deputy, the minister of state Bhanu Pratap Singh, leaned heavily on the Directorate General of Technical Development to issue the Lol. Mrs Gandhi was unfazed by charges of nepotism. In a speech in Ahmedabad she praised the enterprising spirit of her son in putting forward a proposal for a completely Indian small car. She felt it was an inspiring example for the youth of the country. 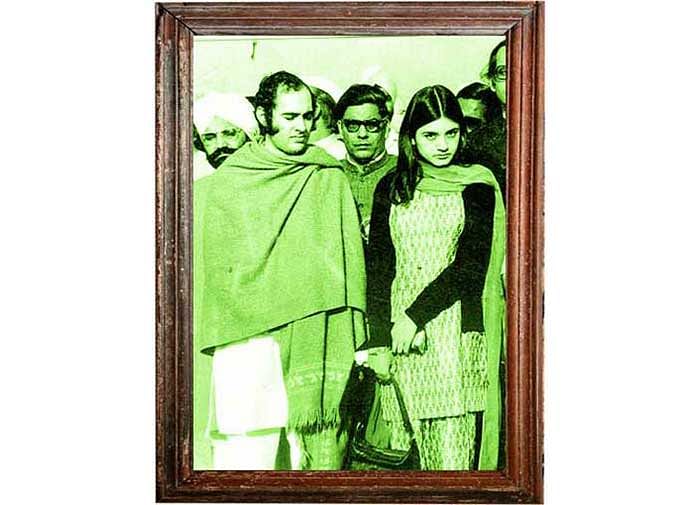 While Sanjay was still in the process of applying for the Lol he found a powerful benefactor in the chief minister of Haryana, Bansi Lal. The chief minister wrote to the industries ministry, recommending grant of licence to Sanjay and giving an assurance that the Haryana government had offered all facilities, including land, water and electricity, and finance for the project. Significantly, Bansi Lal was then in political hot water. MLAs from his own party had revolted against him and submitted a memorandum to the President of India containing sixty-six allegations against him. Bansi Lal was one of the first Congress politicians shrewd enough to realize that he could get around the PM by keeping her younger son on his side.

The chief minister ordered his senior officers to go to Delhi and help Sanjay choose a site for his factory. Sanjay was picky. He rejected land near Sonepat, which was first offered to him. He wanted land closer to Delhi and personally selected a tract near village Dundahera on the Delhi-Gurgaon road. This was fertile farmland, and within 1000 yards of an ammunition dump and an airstrip.

Defence rules prohibited the setting up of an industry close to the ammunition dump; besides, the land was in an agricultural zone. But Bansi Lal brushed aside all rules and regulations. His government acquired the land from the tillers without giving them a chance to take the matter to court. He handed over possession of 290 acres to Maruti Limited, a public company floated by Sanjay on 10 August 1971. The land was sold to Maruti at Rs 10,000 an acre, while the price for adjoining land was Rs 35,000 an acre. The land was to be paid for in eighteen annual instalments. After the first two instalments, Maruti Ltd stopped paying its dues to the Haryana government. Minister of State for Defence Production V.C. Shukla, meanwhile, got the air force ammunition dump shifted elsewhere.

Another controversial point was that the loans extended to Maruti by the Industrial Finance Corporation of India, the Central Bank of India and the Punjab National Bank were all at reduced rates of interest and without the necessary collateral. But the banks could not keep extending money indefinitely to a project that was struggling to take off.

Mrs Gandhi’s headstrong son was not a person to take kindly to advice, no matter how well meant. When Mrs Gandhi requested Law Minister H.R. Gokhale to advise Sanjay on his project, Sanjay instead ticked him off: ‘Mr Gokhale, your laws don’t apply to me.’ A shocked Gokhale reported this to the PM, but she seemed helpless.5 When Maruti ran into all kinds of difficulties towards the end of 1973, an anxious PM asked her finance minister, C. Subramaniam, to look into the company’s affairs.

A meeting with Sanjay took place with Indira Gandhi present. Subramaniam asked for the project report on Maruti. Sanjay maintained that there could be no project report before the project started. When Subramaniam insisted that a project report was essential, Sanjay dismissed his advice, stating that old-fashioned methods of operating were not for him. Subramaniam later apologetically told the PM that Sanjay, however dynamic, did not know how to proceed with setting up a company. He promised to help by inducting professionals. But Sanjay haughtily turned down his offer. Subramaniam had no option but to issue instructions to all banks to not lend any more money to Maruti. According to Subramaniam, Mrs Gandhi was so upset about the whole affair she had tears in her eyes.

The story of Sanjay’s dealing with the Central Bank is revealing of the way things functioned when Sanjay wanted his way. Dharam Vir Taneja confessed to eminent journalist Romesh Thapar, then a member of the bank’s board, that his appointment as chairman of the Central Bank was thanks to Sanjay Gandhi, whom he had known since he was a child. Taneja had promised Sanjay that if he was made chairman of the bank he would help him with finances for Maruti. When his chairmanship did not materialize, Taneja complained to Sanjay. An indignant Sanjay stole the file dealing with the chairman’s appointment from his mother’s office and refused to return it unless she nominated Taneja as chairman. Mrs Gandhi finally succumbed.7 The PM’s secretariat had already made out a note in favour of appointing P.P. Gutta of the Union Bank as chairman and the proposal had been circulated to the Appointments Committee of the cabinet. But Mrs Gandhi overturned the decision by writing on a slip of paper: ‘I have expressed my firm views regarding this matter. I think Taneja should be given the post.’ (She had underlined Taneja’s name to make it clear that this was an order.)8

As details of the many irregularities in establishing Maruti Ltd leaked out, the issue figured prominently in the media and Parliament, embarrassing the government. Opposition leaders, including George Fernandes, Raj Narain, Madhu Limaye and Atal Behari Vajpayee, accused the PM of practising the worst kind of nepotism. The PM’s ministers defended the project in Parliament while avoiding revealing the true facts. But the PM’s principal secretary, P.N. Haksar, was apprehensive that the Maruti project was giving the government a bad name and could blow up into a scandal that would cause immense damage to Mrs Gandhi. He was conscious that Mrs Gandhi could not see rationally where Sanjay was concerned, and she refused to accept that despite all the government assistance provided, the project had little chance of success. Haksar recommended to Mrs Gandhi that in view of the mounting criticism, the Vehicle Research and Development Establishment (VRDE), Ahmednagar, get a feasibility test done on Maruti. Haksar also advised Mrs Gandhi that if Sanjay persisted with his Maruti project it would be better if he lived separately from his mother, so that she did not get entangled in any scandals attached to Maruti. He was uneasy about the dubious people who surrounded Sanjay.

Sanjay never forgave Haksar for trying to scuttle his project and would later extract his revenge. It was because of Sanjay that Mrs Gandhi gradually distanced herself from Haksar who had been a friend since her student days in London, and later her main adviser as PM. After 1973, Haksar had his wings clipped and he was eventually moved from the PM’s secretariat to the Planning Commission as deputy chairman. He was no longer in Mrs Gandhi’s inner circle.

The Maruti prototype could never pass the VRDE’s test for roadworthiness up to 30,000 kilometres.

The car, which was supposed to be totally indigenous, had a German engine fitted in the prototype by a German technician who was hired as a consultant by the company. The problems ranged from vibrations and rattling to brake failure and steering problems. Once, the prototype fell into a ditch because of a defective steering tie rod. However, the heavy industries minister T.A. Pai finally ruled that the VRDE tests were not essential for granting Maruti the manufacturing licence and on 22 July 1974 Maruti was granted an industrial licence for producing 50,000 cars. R.K. Dhawan had earlier warned the industries secretary that he would have to ‘report to the highest’ if the ministry continued to procrastinate about issuing the licence.

The tale of Maruti is replete with examples of extortion, string-pulling to bend rules, and blackmail.

HomeWeekend“Mrs Gandhi was so upset about the whole affair she had tears in her eyes.”