Lost Lives: Face-To-Face With Meena, Jennifer, And Other In Nicobar 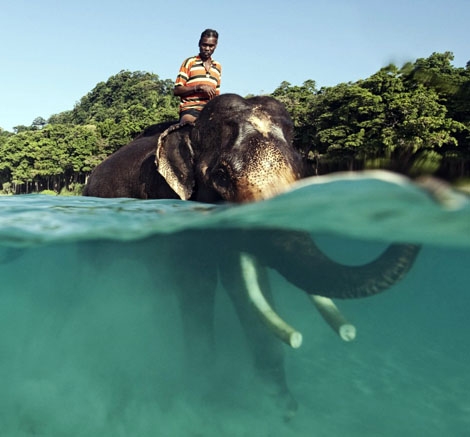 A midst the sheer beauty that surrounds the exotic Nicobar Islands, Syeda Hameed and Gunjan Veda encountered hope in the face crushing tragedy.

They met Meena who was running a makeshift school for children after the tsumani destroyed everything familiar to them; they met three-year-old Jennifer, whose bright smile faded each time someone mentioned her mother, who had been swept away by the merciless seas; and they landed up as the wedding guests of Herbert and Christie, who were trying to start life afresh even as they mourned the loss of their parents.

The rough and rowdy Ten Degree Channel separates the Andaman group of islands from Nicobar. By ship, it takes sixteen hours to reach Carnic, the northernmost inhabited island, but we were on a Dornier aircraft, with a team of six colleagues from the Tsunami Relief Project of the Planning Commission.

The view from the Dornier was even more breathtaking than from the flight the previous morning. The entire world seemed an endless expanse of blue of different shades, shades no artist’s palette could create. Where did the water end and the sky begin? It was difficult, nay, impossible, to say. Perhaps it is in places like this that words like ‘eternity’, ‘harmony,’ ‘continuum’ take on new meanings.

Against the constant drone of the Dornier, it was difficult to say or hear anything. There were people around us and yet we felt as if an invisible wrap had been thrown over us. It was a private world, without boundaries. In the lines of Iqbal: ‘Tu hai muheet e bekaran mein ek zara si aabju’ (You are the boundless ocean, I, an infinitestimal drop.)

All too soon we were shaken out of our reverie by the captain. ‘Look down,’ he said, pointing. There, below us, extremely vulnerable, stood the saucer-shaped island of Car Nicobar.

The northernmost island of the Nicobar group, Carnic or Pu in the local language, covers an area of just 127 square km. Yet more than 50 per cent of the population of 21,000, of which 17,000 were Nicobarese tribals. The island was ringed by a tiny strip of golden yellow sand. Even from the aircraft, the bruises suffered by it were clearly visible…

On reaching the air force base, we were told that all of us could not go on the next leg of the journey, namely, to the Central Nicobar Islands, also known as Nancowry group. They were perhaps the least accessible and worst-affected islands of the archipelago.

Pre-tsunami, most of the habitation in the Nicobar Islands had been along the coast. These lands had now been submerged or devastated and the coastal roads destroyed. The post-tsunami shelters had been built away from the coast, on a higher ground, wherever it was available. The existing shelter sites were, in most cases, forests, which had to be cleared. So there were no connecting roads.

At Japan Tikri, we were greeted by a drunken tribal captain, Michael Yok. Once a prosperous plantation owner, Yok lost his only daughter and son-in-law in the tsunami and, like many people on the islands, turned to alcohol for solace. Alcoholism, we learnt, had become a major problem on these islands. People paid as much as Rs 1,800 to get illicit liquor.

Here, too, people had gathered to talk to us. They sat under a huge tin roof – women and children on mats in front and men on chairs at the back. The first to speak was Meena Kumari, a short woman in her twenties, clad in a simple green salwar suit, with neatly plaited thick black hair.

A resident of West Bay, she lost six members of her family to the tsunami waves. She and her husband survived as they had gone for Christmas to Mildera, the only village unaffected by the tsunami. Meena’s story resonates the stories of most households on this ravaged island, which has lost a whole generation – its elderly.

With eight out of the nine tribal council members dead, people are left without a leader. Meena told us that she runs a makeshift school for children. ‘But there are no textbooks or notebooks. There is no school building. I teach students from Classes 1 to 5 together under a tree or in a shed, if it rains,’ she told us matter-of-factly. Her students were sitting in a neat row beside her.

Three-year-old Jennifer, clad in a crisp white school uniform, white socks, and shoes, was one of them. She stood before us wearing a green hair-band, a shy smile on her lips.

The smile promptly disappeared when we inadvertently mentioned her mother. Jennifer’s mother had died in the tsunami. While she was too young to comprehend the magnitude of the disaster that hit her people, she missed seeing her mother.

‘How long will be continue to live on free rations?’ We turned to see the speaker, a thin woman with shoulder-length hair, in a wrap-around skirt and purple shirt. Valina was the tribal captain from Ibol Kappanga Shelter.

‘People are still living in fear. They are afraid to venture into the sea for fishing. If we survive the monsoons, then maybe some would start fishing. We are yet to recover from the psychological trauma unleashed by the wave,’ she informed us in a soft voice.

After this meeting, we walked around the Japan Tikri Camp. We passed the beautiful bamboo-and-leaf house of the captain, it was easy to see why he did not want to move from here. Suddenly we saw a brightly decorated shed. Inside, a white banner welcomed everyone to the wedding of Herbert and Christie.