Advertisement
Home / Weekend / Ladakh Tales: To Heaven and back

Ladakh Tales: To Heaven and back

ANIRUDH CHAOJI loses his heart to the riches of Leh.

As a child, I had received a small slab of stone with an intricate carving on it, in a script that I did not understand. The person who gifted it, an officer in the Armed Forces had brought it from Alchi in the Himalayas. Ever since, the words — ‘Om Mani Padme Hum’ and place Alchi were deeply etched on my young mind. So when I planned a trip to Ladakh, I made it a point to incorporate a visit to Alchi.

Alchi is a monastery, close to the town of Leh, high in the cold desert of Ladakh, in the eastern part of the trisected state of Jammu & Kashmir.

Some people prefer to fly into Leh from Delhi and then take at least a day to come to terms with the rarified air at 3505 metres (11,000 ft). Our group of seven ‘young at heart’ explorers took the more frequented yet more adventurous and a little tough third option of driving from Manali. After a comfortable overnight stay at Jispa we started early the next morning. We stopped at the Baralacha La to add a few photos to our albums… huff puff… At 4892 metres (15360 ft), even brisk walking called for extra efforts. 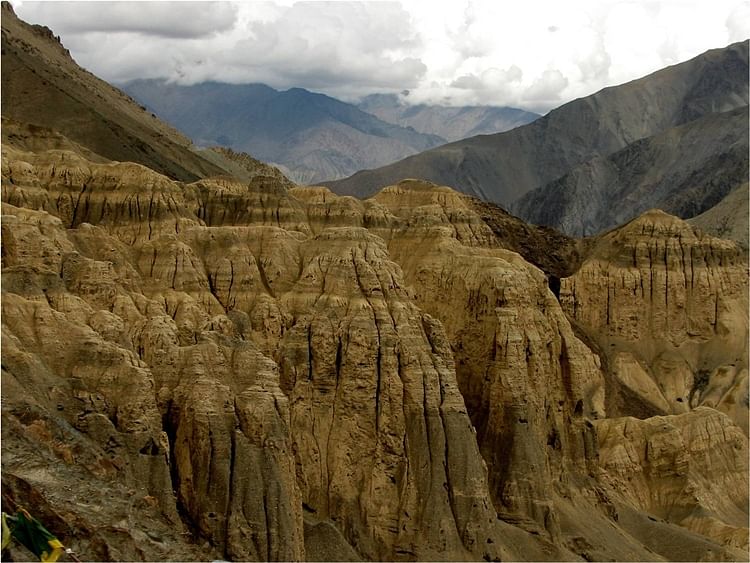 As a result of extreme climatic conditions and paucity of rainfall, compounded by very poor agricultural produce — this area has one of the lowest population densities in the world — just around two per sq. km. But it is surprising how those people who live here actually manage to live. Karzok, a small village at 5000 metres (15700 ft.) near lake Tso Moriri, is considered to be the world’s highest inhabited and cultivated place. Many of the residents of that region are nomadic herders known as Changpas. The town of Dras, made famous by the Operation Vijay at Kargil, has the reputation of being the second coldest inhabited place in Asia with the temperature dropping as low as 40 degrees below freezing.

Our journey on this road took us further over the Lachulung La at 5065 metres (15904 ft.) to Pang for lunch. We were soon approaching the world’s second highest motorable pass of Tanglang La at 5360 metres (16830 ft.), where snow took over. A layer of white surrounded us — till where the eye could see. It was the most amazing sight. Late in the evening, we drove into the comfort of a hotel at Leh for our stay. Leh was already asleep by 9 and the streets were deserted. In fact it was only in the late nineties that Leh actually got its street lights. 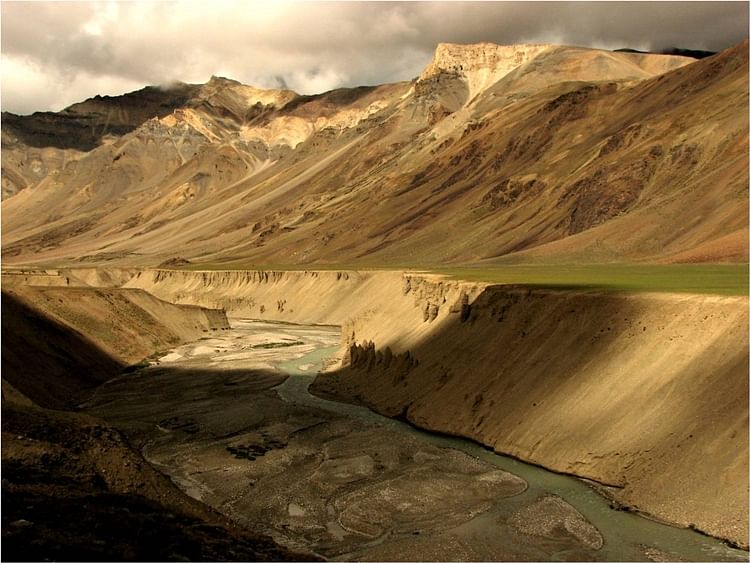 Next morning woke us up to a spectacular view of Leh — nestled between barren hills is the green tree covered city. Overlooking the city is the Leh Palace, a nine storeyed monument built in 1630 by King Sengge Namgayal, in a style similar to the Potala Palace of Lhasa, which in fact the Leh palace antedates by fifty years. Leh was also a major hub for the trade route between Punjab and Central Asia and Kashmir and Tibet.

Even today, you could see that the streets of the main bazaar were wide with broad kerbs, designed to felicitate the passage of caravans of horses, donkeys, camels and also provide room for display and storage of merchandise. Traders brought in Chinese silk, Indian tea, spices, pearls, gold, pashmina wool, salt, opium, carpets and even Varanasi brocades. Today, these traders have been replaced by modern shops and curios. Plastic money has replaced the barter trade. The Central Asians have been replaced by adventurous Europeans and people from more faraway lands.

We began our Leh exploration with the Hemis Gompa, located almost hidden behind the mountains. This is the largest and the richest Gompa in Ladakh. It was also founded by the Leh Palace builder King Sengge

Namgayal in 1630s and ever since this Gompa has been the most favoured by the Namgayal dynasty. The annual Hemis festival is dedicated to Guru Padmasambhava, the 8th century reformer who brought Buddhism to Tibet. However, most of the scriptures had to be translated to the Tibetan script and this was done by the great translator Rinchen Zangpo.

Like most other Gompas, Hemis is also situated on a hillock. Its upper part comprises of temples called Lhakhang, assembly halls called Dukhang together with the temple of the fearsome guardian deity called Gonkhang. Each Gompha also has an impressive collection of books in the form of loose sheets tied together between wooden boards and wrapped in silk. Many of these are a few hundred years old.

The dwellings for the monks are on the lower slopes. Monks, also called as Lamas, in many sects have to live as celibates to observe strict discipline to set examples of pure life, selflessness and tireless dedication to their noble mission. Girls initiated into religious lives are called Zomas and live in nunneries. However, they are free to marry.

Head of each Gompa is addressed as a Kushok. The title of Rimpoche may be given to the Kushok of a large Gompa. Since they don’t marry, they have no heirs. Thus when a Kushok dies, his successor is found in the form of a new incarnation. It is believed that before dying, the Kushok indicates where the new incarnation will be found.

The Gompa that I was specially waiting to reach was Alchi. Set on plain grounds close to the Indus river, this Gompa was built to commemorate the revival of Buddhism in the eleventh century. But for some unknown reasons, this Gompa was closed for regular worship in the 16th century. As a result, the Thangka paintings of the entire Mahayana Buddhism cosmology have been spared of soot from the yak butter lamps and intense sticks and are thus in a good state. 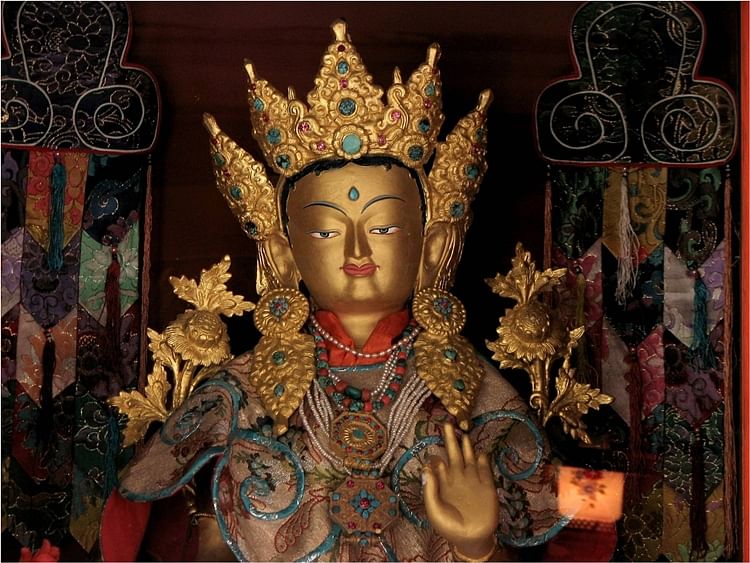 Dukhang, the oldest of the complex, has a beautiful central image of Vairocana — the main Buddha of meditation. The second oldest temple of Sumtek has Avalokiteshwara — the Boddhisatva of compassion with intricate miniature paintings on his legs. On one side is the image of Manjushri, the Boddhisatva of wisdom, who is shown with a flaming sword which cuts through the fog of ignorance. And on the other side is the image of Maitreya, the future Buddha.

By the time I was flying out of Leh airport, I felt that I had left behind a part of me, yet I was carrying so much more with me in the form of sheer experience and understanding of life. As the aircraft flew close to the Spituk Gompa, I was telling myself that very soon I would be doing this pilgrimage again.