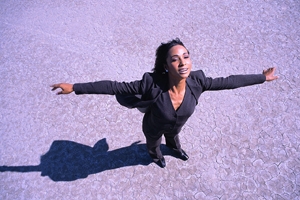 Giving precedence to the welfare of society or the environment over our own will graft the compassion and social sensitivity of communism on capitalism. We will have the best of both worlds, writes SUMA VARUGHESE.

I have a friend who is, or rather was, a highly successful scientist. What caused the change of heart was a trip to Bihar. There, among the ravaged coalmines and impoverished tribals, she learnt firsthand of the cost of development; that urban comfort and convenience such as electricity was purchased at the cost of the tribal, whose land was plundered and way of life disturbed.

Determined not to be part of a system surviving on such inequities, she opted out of her job, and is now engaged in spreading awareness of their plight. Her income is less certain, but, reports my friend, she is finally experiencing a sense of integration. No longer does she feel that her professional and personal selves are pulling in different directions, or that her livelihood is earned at the cost of a damaged society.

These, my friends, are precious benefits. But the question is, why must they be available outside the system, and not within it? Why must the jobs we undertake, often be at the cost of society? Why must development conflict with the environment?

Can we do something about these issues, or should we write them off as the inevitable fall-outs of the market force? Most would agree that despite its dark side, between communism and capitalism, the latter is still the lesser of the two evils. At least, it is based on the freedom of the individual. It favours private initiative and in its zeal for triumph, offers an excellent motivation for excellence and growth.

Still, must we be content with such an imperfect system? How do we reconcile with its ruthlessness, its social inequities, its consumerist tilt, its destruction of the environment?  Is there a way out?

Indeed there is. While its implementation may be difficult, the solution itself is the acme of simplicity. All it needs is for us to shift from the profit motive to the service motive.  Think about it. The moment we move away from personal gain towards the concept of service to humanity and to the environment, will we ever exploit the environment or the tribal? Will we make products that damage humanity like liquor or cigarettes?

Giving precedence to the welfare of society or the environment over our own will graft the compassion and social sensitivity of communism on capitalism. We will have the best of both worlds. We will produce what is necessary, rather than what people want. Our priorities will be shaped by the needs of the man at the bottom of the totem pole, rather than the whine of the one on top. And we will ensure that the technology we invent will work in favour of the environment rather than against it.

Were our public enterprises to operate from the service objective they would be the best managed and most profitable of all organisations for there is power in this concept that fills the employee with enthusiasm and commitment.

Likewise, the service motive would transform our Government officers themselves, for though they have been ostensibly formed to serve the Indian public, that is the last thing on their minds. So what do we need to bring about this change? Only one thing and that is individual transformation.

Unlike communism, the service motive cannot be thrust down upon society. It must flower out of individual conviction and commitments. It can only work when the individual has changed his values and attitude. Unless I genuinely want to serve you, unless your welfare matters to me, I can spout all the best meaning words in the worlds, but none of them will bring about the required result.

We must be convinced of the need and the possibility. So how do we bring that about?  Fortunately, there are many forces already working in favour of the shift. One is the philosophy of the land, endorsed by the sages of ancient India. Operating from the truth that the Universe is one, the sages had long ago intuited the knowledge that we live in an interconnected universe, in which my interest and your interest coincide. Service is, and has always been, a very fundamental tenet of Indian thoughts.

Furthermore, provoked by the success of the Japanese on the basis of similar ideas, many management institutes are promoting value-based curriculum for their students. These ideas are being promoted by management consultants, who are also proving that not only do they obviate conflict they are very good for the bottom line.

My hunch is that as the convulsions and contradictions of the old system multiply, more and more will voluntarily shift to the service motive until, with the proverbial hundredth monkey, the system itself will change. Maybe then, my friend can return to the fold and still be happy.