Once forbidden to touch a football, Turambekar shares her inspiring story with FPJ about how she never gave up on her dreams, the obstacles she faced as a girl, how she overcame challenges and eventually, triumphed against all the odds
Anil Dias 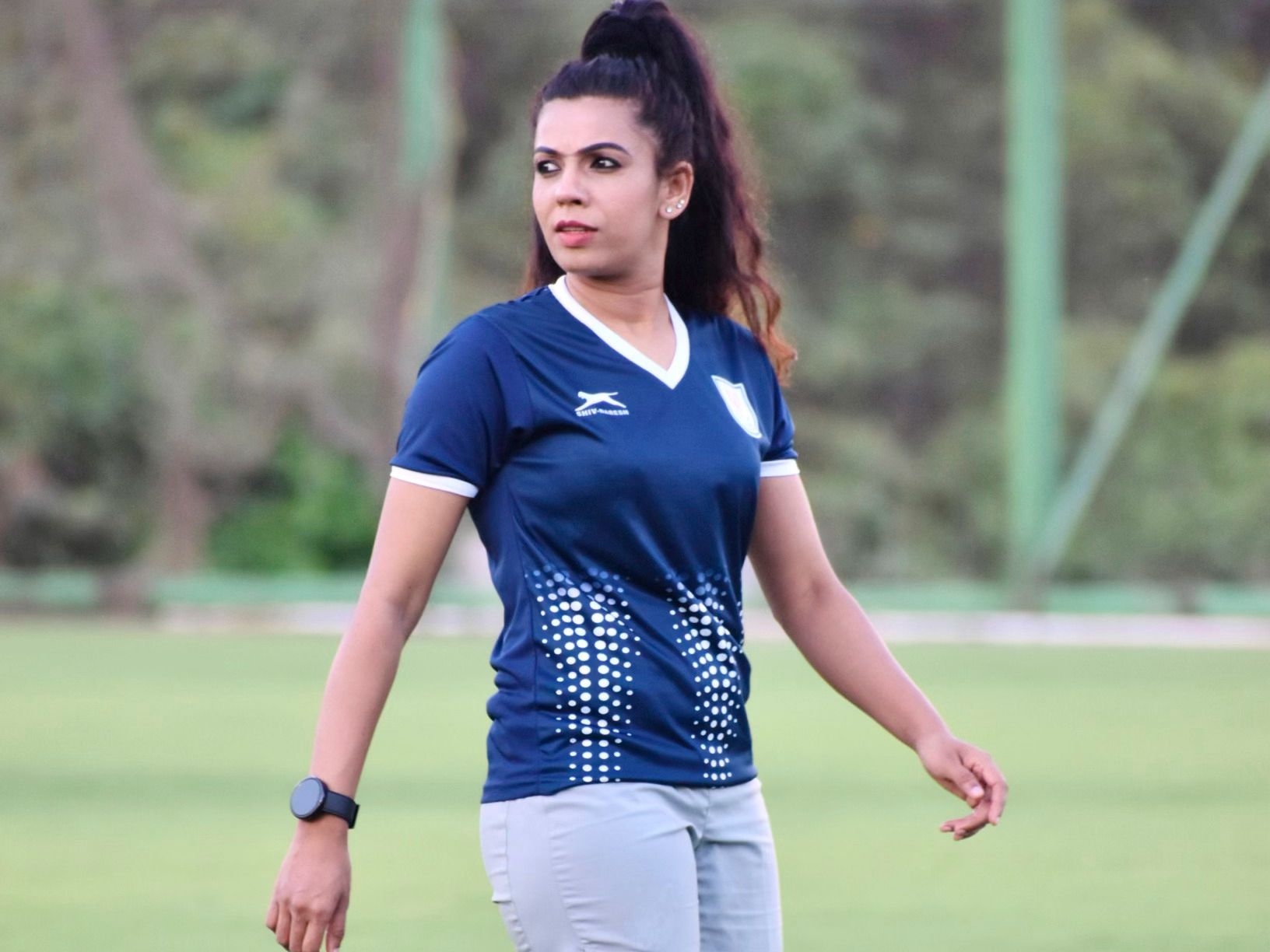 Coaching a club at the top level can be a daunting task, especially when it comes to handling big-name players. We saw how Zinedine Zidane’s job as Real Madrid coach was primarily to man-manage the likes of Cristiano Ronaldo and Gareth Bale among others.

Anju Turambekar will surely know more than a thing or two about such a situation. After all, she’s the only woman technical director of a men’s football team in India, namely five-time national champions Dempo SC. Not just that, in 2018, she became the youngest woman to get her Asian Football Confederation (AFC) ‘A’ license coaching badge.

In a freewheeling chat with FPJ, the 33-year-old said that while she is aware “it’s not the general norm”, breaking barriers is what she’s done all through her life. “Throughout my life, challenges were always the stepping stones and I have been critically challenged at every step, starting from the permission to play football, tackling the stereotype that girls can’t play male-dominated sports, and having to justify every day that women can excel in leadership roles,” she said. 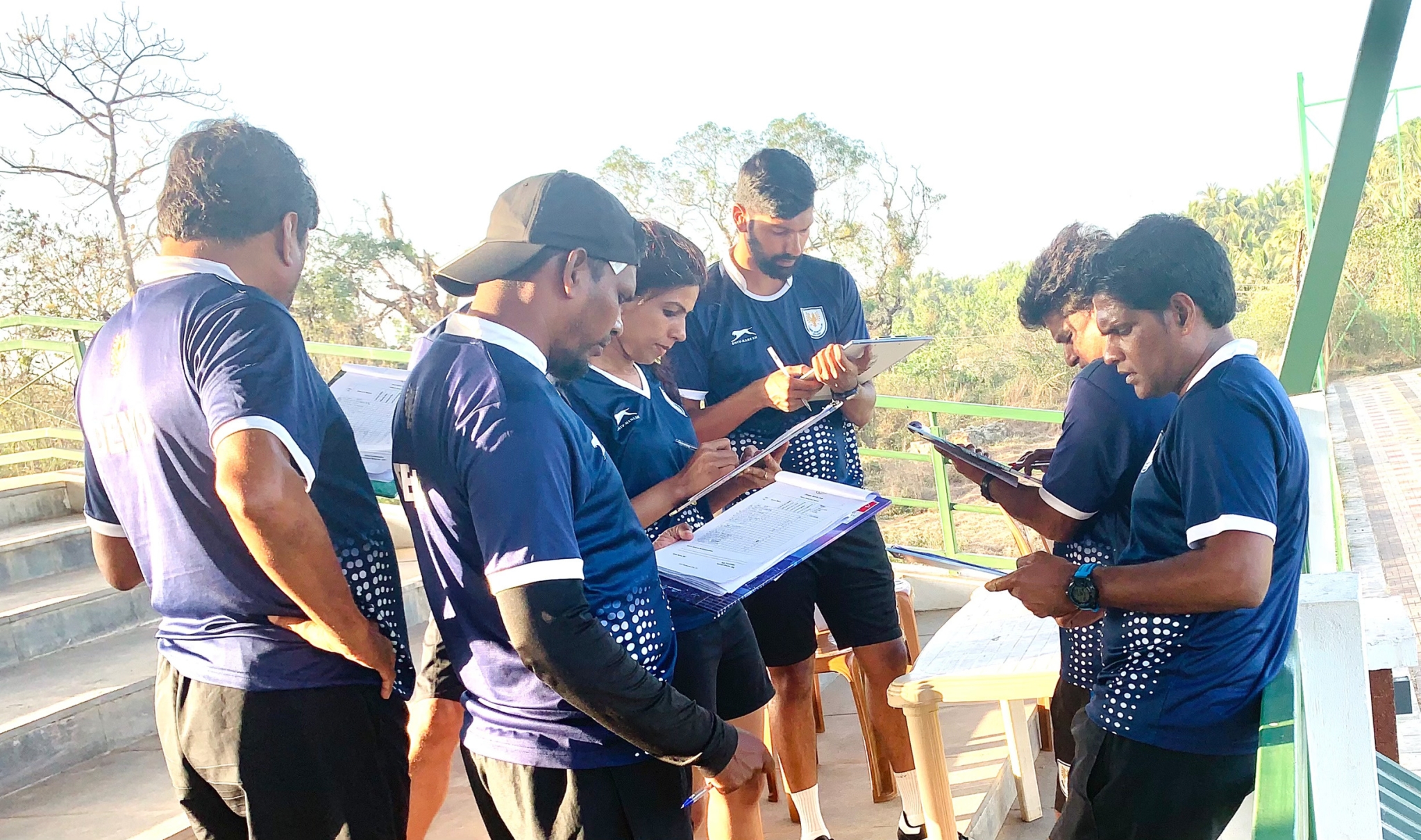 She said that she learnt very early in her footballing journey that if she’s going to excel, she’ll have to be “better than good”. “Right from the beginning, I was taught that no matter the audience, I have to do my job. My approach to a certain job will not change no matter what. I always knew I had to be good at my work. But I learnt that sometimes good isn’t enough. I needed to be better than good.”

At Dempo, she said, she never had a problem. And nobody ever looked down upon her. “During all the rounds of interviews that I had with the president of the club, Shrinivas Dempo, he was very clear and demanding in terms of the kind of person he wanted to appoint to carry the club’s legacy forward on the technical front.” 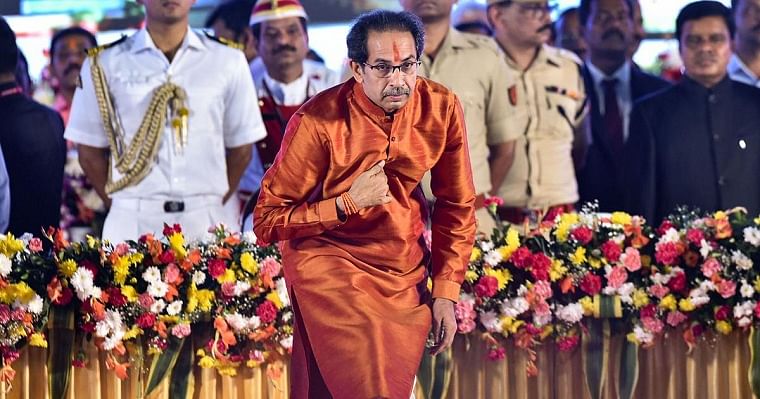 Anju said, “He never made it a big deal or even brought it up that he is interviewing a woman who will be working in a male-oriented setup. All he cared about was my work and how I could contribute to this club. This approach naturally inspired me to be a part of his organisation.”

She may now be head of a club that has won five national league titles. As a child, she had to hide from her family and play football and wasn’t spared beatings when her dad found out she was playing football with the boys.

Born in the farming village of Bekanal in Kolhapur, Anju’s life growing up was quite uneventful, she says. “My day consisted of waking up at 5 am, taking the cattle to the field, then going to school, and then attending dance classes. It wasn’t boring, but it wasn’t eventful either,” she says. Looking at her qualifications, one would be forgiven to think she started playing football at an early age.

However it wasn’t until standard ten that she was first introduced to the ‘beautiful game’ There was a ground in her village but she wasn’t allowed to play or stand there and watch the guys play because according to her family, it was ‘a boys’ game’.

The only activity she was permitted was dancing. “I loved dancing. I used to attend dance classes regularly and had built up a good reputation in my village as that of a dancer,” she said. When she was in the 10th standard, a football club near Kolhapur organised a football camp for girls. When Anju heard of it she was thrilled, but then it dawned on her that it would need her family’s approval.

“It was a question of whether I should continue being the ‘good girl’ and not play a sport that was dominated by men, or should I go and try out something that has never been done in my village before? Clearly, I chose the latter,” she said. She attended the camp without telling her parents. “Since I was due to appear for my SSC exam, I told my parents that I had extra classes and so I would be home late every day. I didn’t even have shoes to play with, like most of the girls at camp. We played barefoot,” she says. 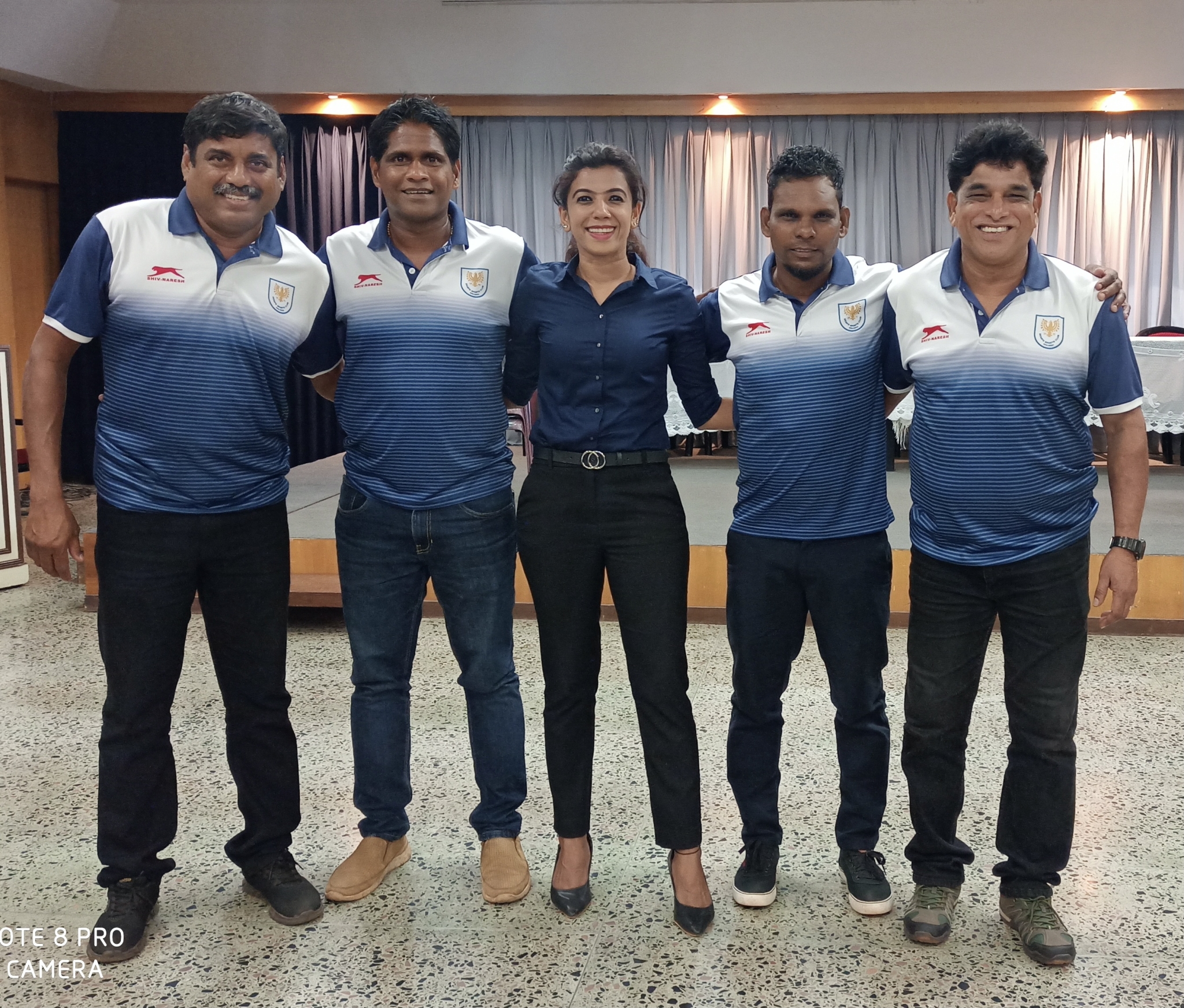 After the camp, Anju just couldn’t take her mind off football. “Football was like a lifeline for my otherwise mundane life,” she says. “On the football field, I felt free.” The only issue was that after the camp, the girls didn’t play in the village. That meant that Anju’s only option was to play with the boys. “What else was I supposed to do? I was a pretty rough player, and the guys didn’t mind me playing with them.” When her dad got to know that she was playing football, that too with boys, he rushed to the ground and dragged her home. “He beat me black and blue. He asked me what would the people in the village think about me. You know, the usual talk,” she says with a sarcastic laugh. “I got beaten every day, but I went back the next day. People at the club told me I was a good player and that I should take football seriously,” she says.

Someone from the club told Anju about the All India Football Federation (AIFF) conducting selections for the girls’ Under 19 national tournament. The tricky part was this selection was in Mumbai and Anju had neither been out of Kolhapur nor travelled alone. “My dad said that there was no way he was sending me. However, after a lot of pleading and me acting stubborn, he relented.”

She came to Mumbai on her own and was selected in the team. However, when she returned to her village, her father said he wanted her to join the police.

“I had to give the last theory exam to join the police. That exam was in the morning when everyone in her family was working in the fields. “I just knew I didn’t want to join the police, so I packed my bags and left for Pune without telling anyone in my family.”

She chose to play for Pune University as they gave her meals a place to stay. When she returned to her village after six months, her family didn’t talk to her. They had read in the newspapers about her achievements on the field.

“They weren’t going to tell me that they were proud of me,” Anju said. At least not yet.

Anju’s big break came in 2007 when she was attending a camp for the senior national championship. She was spotted by an employee of Magic Bus — an NGO for children. “He asked me if I was interested in coaching children. I jumped at the opportunity. At Magic Bus, I was coaching children, and after a year, I was training coaches on how to train children.” She was rewarded for her hard work by being chosen to attend an international coaching course by Royal Dutch Football Association (KNVB).

In 2013, she was offered a job by the AIFF to work in grassroots development. In the span of three years, she was heading the division. Thanks to that job, she got to travel the length and breadth of the country, interacting with children and coaching the coaches.

While she says she loved her job at the AIFF, she wanted to work in a club that was committed to youth development. And when she was approached by Dempo, she couldn’t resist. “My primary role at Dempo is to look after the holistic development of the players and coaches. It is also my responsibility to brainstorm and envision programmes and processes that will help the club in the long run. While the pandemic has put a dampener on things, we have a lot of plans in the pipeline,” she said.

So how comfortable are the players and coaches taking instructions from her? “It took maybe just a day for them to get accustomed to me. Once they realised I knew what I was doing, they believed in me and made it quite easy,” she said. Shrinivas Dempo had only superlatives for her. “All I saw was her work. I want to build a strong youth system. Instead of signing big players, I want academy players to play in our senior team. Her work at AIFF was exceptional. I knew she was the perfect person for the role and that’s why I brought her on board. Why should gender matter?” he said. What about her family? Are they finally at peace with her foray into football? “Everyone in my village is following my journey. Girls now play football there. My parents encourage me now. I go back home quite often and take care of them financially too,” she says.

Her 103-year-old grandmother caused quite a social media storm, when Anju posted a photo of her watching an FC Goa match earlier this year. “I’ve been really close to my grandmother and asked her to come and stay with me in Goa for a while. I was watching a match, and she too stayed up. In fact, she even stayed late at night to watch UEFA Champions League matches. I’ve made her a football fan,” she said. Having convinced her village into accepting girls on the football field, Anju hopes to see more women in prominent positions at football clubs all over. “What’s the difference?” she asks. 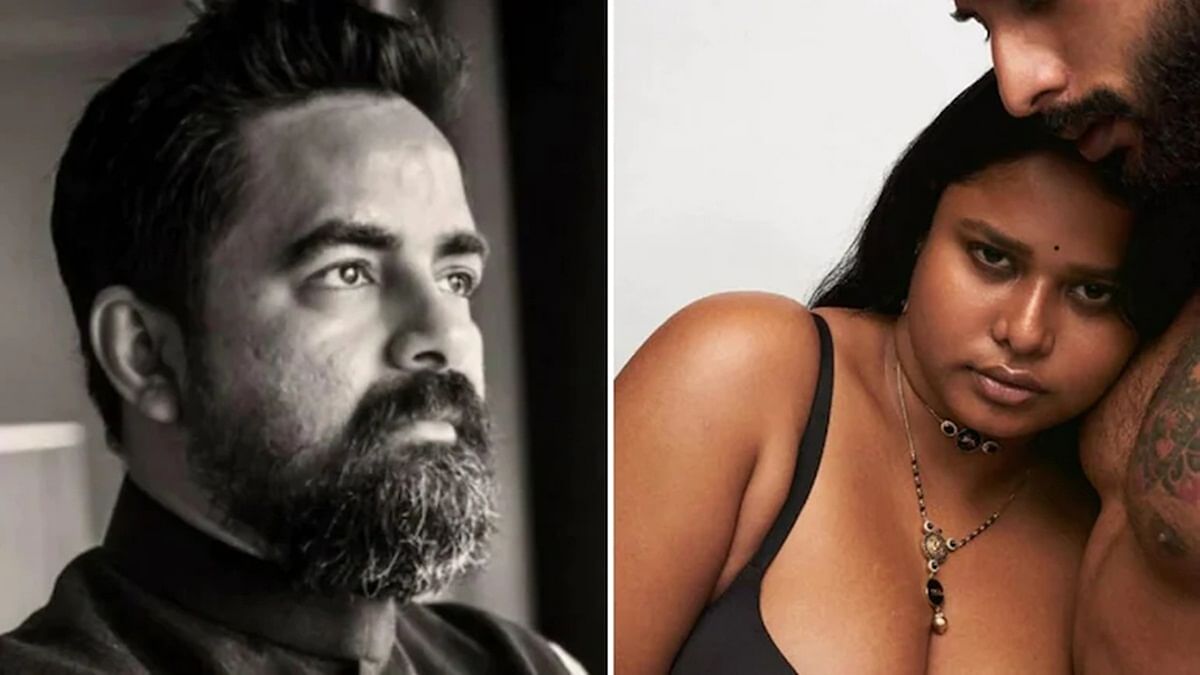